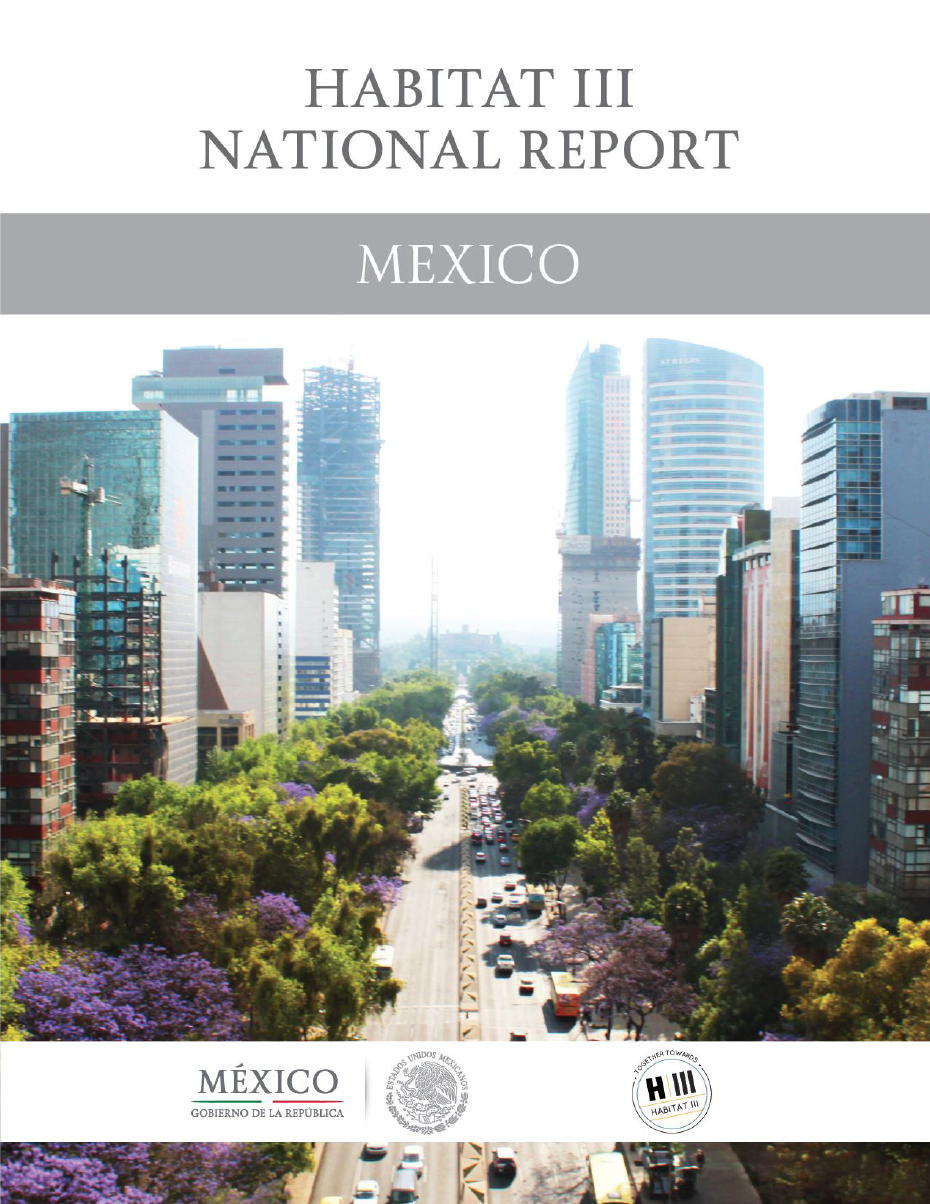 In the last decades, Mexico has become an active player in the consolidation of the international agenda for the development of peoples, the protection of the environment and the fight against climate change. Therefore —and in continuance— the federal administration 2012-2018 established the consolidation of Mexico as a global responsibility actor as one of the axes of its government action.

Since 1996, when the United Nations Conference on Human Settlements (Habitat II) was held, the world has changed radically, it has globalized; new technologies have been developed; and important advances on public health, education and other issues have been accomplished. However, in regards to urban development and housing, the concerns are the same they were twenty years ago.

As well as in 1996, the international community aims to develop safe environments, well located and adequate housing, improve urban infrastructure and accessibility to equipment and the opportunities offered by cities. It is the responsibility of the Member States of the United Nations System to finally satisfy these old requirements; and the design of policies and mechanisms that ensure all the inhabitants of human settlements can have access to the opportunities they present.

In the last 20 years Mexico has made significant progress. Nowadays, an important housing financing system has enabled millions of Mexican families to access the formal housing market to obtain a decent housing. However, there is still a meaningful lag in addressing an important number of Mexicans living in poverty and that meet their housing needs within informality. Likewise, beyond federal institutions, many sub-national governments have designed innovative policies to face the challenges of cities, forming partnerships with public, social and academic institutions and becoming international parameters on this topic.

However, Mexico, as many other developing countries, is a country of contrasts. The Mexican cities show the coexistence of financial districts and industrial centers that create quality jobs, and they are located next to fragmented and unsafe neighborhoods, with high lag indexes regarding infrastructure and basic services. The reality is that, for the last 20 years, Mexico has not only failed to tackle poverty but, as some studies show, income inequality has increased.

Both phenomena—poverty and inequality—are structural conditions that for the last years have molded the design of urban public policies and have determined organic processes of the development of cities.

The changes on urban development that the current administration has prompted acknowledge and accept there is still a long way to go in the consolidation of Mexican cities. The same policy that for the last decades enabled millions of families to own a household had a negative impact in terms of urban dispersion, with social, economic and environmental costs described throughout this document.

Mexico is living a phase of deep structural reforms that seek to boost the economic and social development of the country. During the current federal administration in Mexico, this process has included a deep modification of the legal framework in order to strengthen the State's democratic institutions, to increase the productivity of the domestic market and to create the necessary conditions to improve the quality of life of the Mexican population.

In this sense, the federal administration 2012-2018 acknowledges cities as the center of national life and as an engine for development, so it has decided to foster fundamental changes in its policies and programs to tackle and match urban problems and needs.

One of the first measures adopted was the creation of the Ministry of Agrarian, Territorial and Urban Development (SEDATU Spanish acronym) as the federal body in charge of the land regulation and the comprehensive development of cities and agrarian centers in the country.

During its first years, SEDATU has been recognized as an innovative institution in territory planning; it has pursuit the creation of mechanisms to alleviate the inequality that is currently present in different regions of the country. It has boosted cities as pillars of national development, working on forging a symbiotic relation between the country and the city to increase the wealth and productivity of every corner of the country.

The Government of Mexico, through SEDATU and as a result of an extensive consultation process, has established the principles of its National Urban Policy within the National Program of Urban Development 2014-2018 and the National Housing Program 2014-2018. Together, these instruments contain the comprehensive vision of the cities that Mexico is pursuing, as well as the necessary tools to attain them.

With the aforementioned actions the Government of Mexico, hand-by-hand with society, academics, private sector and international institutions, is seeking the creation of a new urban model in which cities can be consolidated as equitable, healthy, safe and sustainable spaces that ensure the full exercise of people's right without any discrimination.

To create these new urban policies, the first step should be to share experiences and good practices worldwide in the field of housing and urban affairs. Mexico is willing to participate actively in the Habitat III Conference, to share with the world the challenges and accomplishments witnessed in the cities of the country, and to engage in a frank and open dialogue with the rest of the countries.

Habitat III will be the right time to break urban paradigms that still prevail, and to dare imagine new cities that allow its inhabitants —regardless of race, beliefs, gender, age, capacities or socioeconomic condition— to fully develop and to achieve a better quality of life.

The opportunity presented to influence in the reality of thousands of millions of people has no comparison. Besides the Habitat III Conference, there are current efforts to define the Sustainable Development Goals (SDGs) that will outline the actions of governments around the world for the next decades. Therefore, Mexico considers that since the cities concentrate most part of the world's population, they will be the main setting in which countries will intend to meet these goals.

The different forums currently promoted by the international community to review the urban development policies worldwide are an opportunity to boost long-term changes that will benefit millions of people around the world. If Goal 11, proposed by the Open Working Group of the United Nations, (creating inclusive, safe, resilient and sustainable cities) is achieved, the Habitat III Conference and the New Urban Agenda, that will arise from it, should provide the necessary tools for its accomplishment, and there is no doubt that Mexico will be a promoter of agreements and compromises in this matter.

This National Report is the result of different contributions and of the joint effort the National Preparatory Committee for Habitat III, formed by outstanding academics, the private sector, civil society organizations and representatives from all government levels. It contains a brief diagnosis of the reality in Mexican cities during the last 20 years, as well as the government actions to foster its development. This document will contribute to initiate discussions on where we are and what should be done as a country, as a region and as a United Nations System to ensure the development of human settlements and their inhabitants.

We thank the Government of Mexico for their generous contribution to the Habitat III Trust Fund, for hosting a Habitat III Thematic and Regional Meeting, and acting as the co-facilitators of the informal intergovernmental negotiations of the New Urban Agenda.