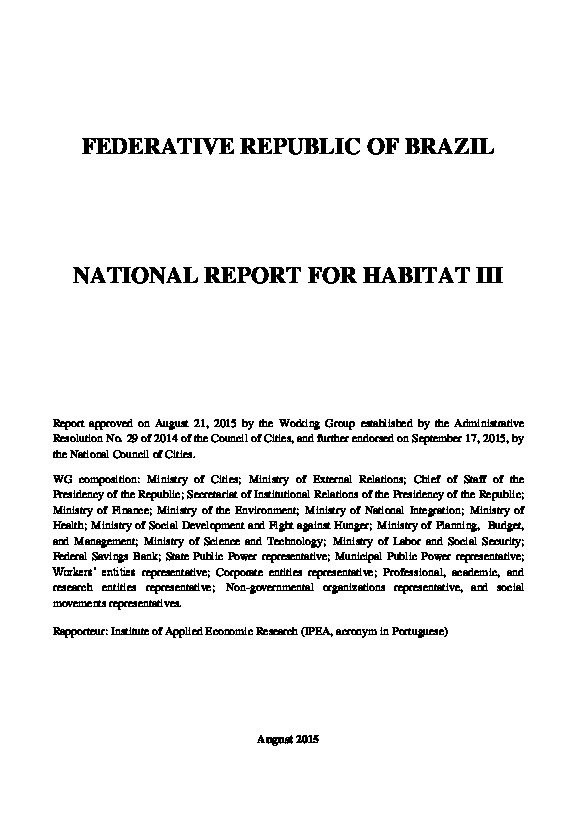 Brazil is preparing for the Conference in a participatory and inclusive way, based on the understanding that the urban challenge requires engagement of all three levels of government and society, as well as partnership between them. This political commitment is fundamental to build solutions and strategies that guide Brazil to overcome its hardships, aiming at building a fair, more equalitarian, economically and environmentally sustainable society.

Given their role as places of production and consumption, the services they provide, and their function of organizing and controlling the other activities, cities play a significant part in the country’s development.

The 1988 Federal Constitution raised municipalities to the status of federal entities, with autonomy to organize and manage a series of public services that became of their competence, changing municipalities’ responsibilities agenda. Currently, the political-administrative organization of the Federative Republic of Brazil comprises the Union, 26 states, the Federal District, and 5,568 municipalities – all autonomous from each other.

Cities, the housing location for 160.9 million Brazilians (Table 04), are the first and foremost  territories to think the national development, and particularly the means of providing access to the basic urban conditions necessary for enabling a daily life with quality: infrastructure for water supply, sewer collection and treatment, complete road system with sidewalks, signalization, as well as access to adequate housing and all other basic services.

The Brazilian housing demand, partly comprised by unsuitable households and demographic growth, is of approximately 7.71 million units according to the Federal Savings Bank ("Caixa Econômica Federal"- CEF) survey (2011) and is concentrated in the three to ten minimum wages range (54% of total). In contrast to previous years, this housing demand is met today in its majority by the formal real estate market and the Federal government's housing programs. In its turn, the housing deficit of around 5.430 million houses (FJP, 2014) is concentrated in the income range of below three minimum wages (73.6%) (FURTADO; LIMA NETO; KRAUSE, 2013).

On the other hand, according to the municipalities that report to the National Information System on Sanitation ("Sistema Nacional de Informações em Saneamento" – SNIS; 2013), 92.98% of municipalities have urban water supply, 56.3% have sewage collection, of which 69.42% are equipped with effluent treatment. Public policies target, in this context, the challenge of taking these services to the more vulnerable parcels of the population, seeking to provide universal access to sanitation and drinking water until 2030, as set forth by the National Basic Sanitation Plan ("Plano Nacional de Saneamento Básico" - PLANSAB) approved in 2013 (Federal Decree No. 8,141/13).

Inequality in the cities also manifests itself in the population’s mobility conditions, affected mostly due to income and compounded by the accessibility difficulties faced by disabled persons as well those with reduced mobility. When traffic levels get close to critical stages for all, it is important to bear in mind that it is worse for those that have to go long distances, with relatively high costs and low quality and safety. F u r t h e r m o r e , those who cannot move because of lack of transportation, opportunity, accessibility or funds should also be taken into consideration. Aiming at changing this reality, federal investments in collective public transportation, legal guarantees of free transportation and subsidies in transport fares have become usual in past years.

In addition to sector deficits and to differences in accessing services and basic facilities, other dimensions of life should also be considered: leisure, safety, health, education, culture etc., which generally show the huge challenges for the effective socio-spatial inclusion and for the reduction of inequalities and urban fragmentation.

In order to change this reality, it is crucial to have financial investments, as well as an organized civil society that is engaged in the achievement of fairer and more inclusive cities; of political commitments from the national, state and municipal governments; of further democratization and access to the judiciary; and of greater capability and quality of public managers and governmental agencies.

It became clear and mandatory, since Habitat II, that public management should take place under the aegis of planning and social participation with integrated social mechanisms seeking the production of cities for all.

Among the Brazilian cities, the case of metropolises or large cities should be highlighted.  They concentrate expressive parts of the urban population (50% of the Brazilian population live in the 25 largest urban agglomerates) and of wealth production (63% of the domestic GDP is produced in the metropolises). The main metropolises perform a significant role in the network of cities since 1960s, when the territorial integration was thought out based on those spaces. Ever since, metropolises began to concentrate not only people, but investments in general, becoming spaces of wealth and poverty, in which the socio-spatial segregation – a feature of the Brazilian urbanization – reveals itself more intensely.

Cities, places for political action and urban development, are still seen as a sectorized system of goods, facilities, and services. The territorial integration of policies, indispensable for cities to effectively and completely provide for their inhabitants' needs, is also a challenge for the world agenda of cities.

Brazil set forth, in the past 20 years, a sound legal and normative framework to implement an effective urban reform. Progress has been made, for example, in land and urban regularization of informal low-income settlements (favelas, slum tenements, irregular and illegal land allotment etc.) and in implementing major instruments such as the Special Zones of Social Interest ("Zonas Especiais de Interesse Social" - ZEIS), which creates areas subject to specific rules of land settlement, use and occupation and directs them to the provision of housing to the low income population.

However, it should be noted that a series of urban issues are structurally set as hindrances and obstacles to the national development. Among them, the urbanization model based on social exclusion and socio-spatial segregation, which creates fragmented and even split urban spaces, is the most obvious and urgent.

The debate on the Right to the City is of great relevance in this context. Its discussion has been gaining ground in several international forums and events, in which documents seeking to define the contours of this right are often presented. This can be exemplified by the Letter from Rio de Janeiro, presented by social movements during the 5th World Urban Forum (Rio de Janeiro, March 22 – 26, 2010) – which had as main topic "The Right to the City: Bridging the Urban Divide ".

It is stated in the Letter that, among others, "[the] Right to the City should constitute a collective right of present and future generations to a sustainable city, without discrimination based on gender, age, race, health conditions, income, nationality, ethnicity, migratory status, political orientation, religious affiliation or sexual orientation, at the same time preserving cultural memory and identity " and that "cities should be understood as a privileged space and place for the exercise of citizenship and democracy as a means to ensure equal, fair and sustainable distribution and enjoyment of its resources, wealth, services, goods, and opportunities to its citizens, comprised by all the people that permanent or transitorily inhabit the cities".

Thus, the right to the city is debated under the perspective of the right to use by all, without privileges or distinction of any kind, of the collective and public space of the city, as well as of the duty of public entities to ensure that the creation of the city is intended to the materialization of its social function.

The discussions on the right to the city seek, therefore, to translate the yearnings of city’s dwellers to live the urban space in its entirety, indistinctively and independently of income, race, gender, age, creed or religion – to participate in the production of the city in its multiple dimensions, and to be able to fully enjoy the city.