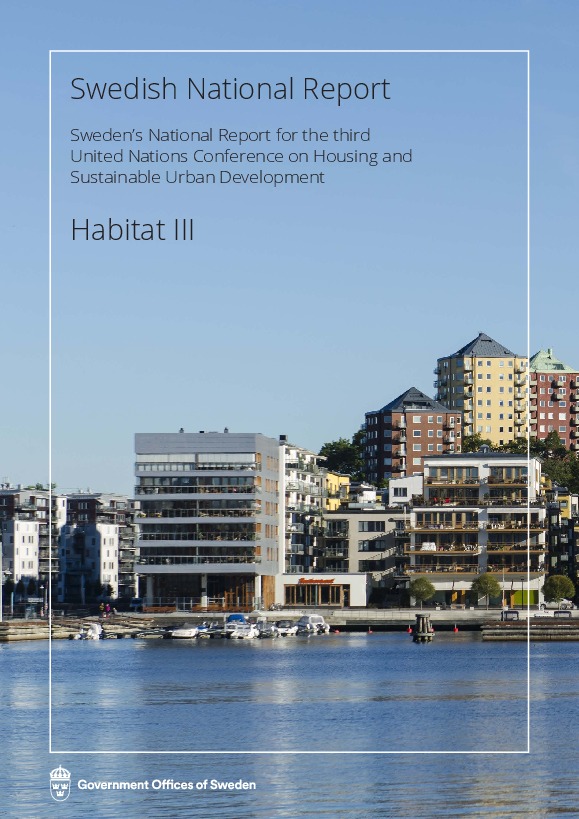 This report has been prepared in close cooperation with the Swedish Government Offices (Ministry of Enterprise and Innovation and the Ministry of Foreign Affairs) by Lantmäteriet - The Swedish Mapping, Cadastral and Land registration Authority - together with Boverket - National Board of Housing, Building and Planning.

The report is based on information from official statistics and various official sources and reports. Responsible Swedish governmental agencies have examined the facts and information provided in the report. The report is fully compliant to the guidelines and format for preparation of national reports from UN-Habitat. The report includes the implementation of the Habitat II Agenda, which was the final document at the last conference in Istanbul, Habitat II, other international and national targets and relevant content on housing, construction and sustainable urban development, land issues and related issues as well as new challenges, trends and visions, etc.
Total number of inhabitants in Sweden in 2015 was 9,851,017 and the land area in square kilometres is 407,310.64. This means that Sweden has 24.2 inhabitants per square kilometre. Population growth in Sweden is mostly taking place in and close to the largest cities.
Sweden has become urbanized rather late. The major phase of urbanization began in the 1950’s – 1960’s, and has continued since that date. Until the 1930’s, emigration from Sweden was bigger than the immigration process. After that time it has been reversed in principle every year except of 1972. After 1972 the immigration changed character in the way that the non-Nordic labour immigration virtually ceased. Instead the immigration to Sweden came to largely consist of refugee migration and family reunion cases.

An urban area is defined in Sweden as an urban area with at least 200 inhabitants, where the distance between the houses is less than 200 meters. This type of definition and measurement are not the same when comparing with the most of other countries. In 2010 there were 1,956 urban areas in Sweden. Their total area corresponded to 1.3 % of the country’s land area. In 2010 lived 8.016 million people in urban areas, representing 85 % of the country’s total population. Percentage of population in urban areas 1960 was 72 % and 2015 86 % with this definition of an urban area with at least 200 inhabitants. The number of children in Sweden during the past hundred years has been fairly steady at around 2 million. People 65 and older accounted for 19.4 % of the country’s total population in 2013, of which 54.4 % were women and 45.6 % were men.

In Sweden, localities are defined as urban, and all areas outside the localities as non-urban. Since the municipalities in Sweden usually are large and include both urban and rural territory, the concept of locality is used for analyses of urban and non-urban development. The localities have no administrative status and thus have to be redefined as built-up areas grow. In Sweden, several major initiatives both at national and local level, promotes the development of sustainable cities. In Sweden, the 290 municipalities have a major responsibility for the planning of land and water areas. The Planning and Building Act states that the municipalities must take into account and coordinate the comprehensive plan with relevant national and regional objectives, plans and programs relevant to create a sustainable development.