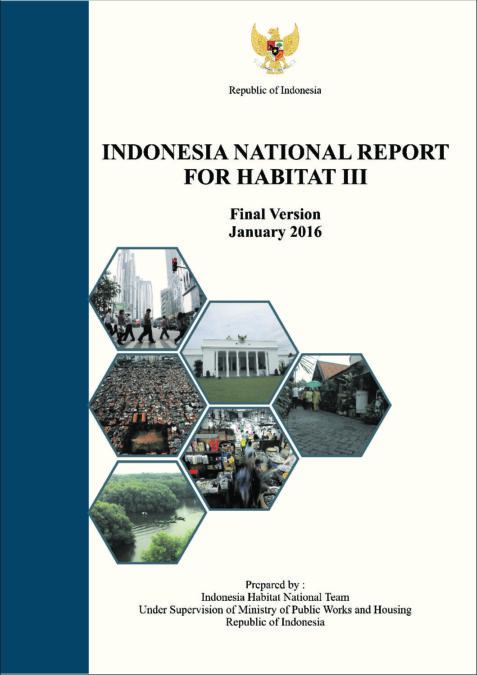 Approaching the conference on Habitat III in 2016, each UN country member has to prepare a national report reporting their achievement of the Habitat Agenda, which will then be used as inputs for formulating the next agenda of Habitat III. This national report consists of implementation of the Habitat Agenda, issues and challenges faced by each member country, and thoughts that contribute towards the future agenda.

UN Habitat provided the guideline and format for the writing of the national reports that comprise six topics, thirty issues and twelve indicators. The sixth topics are (1) Urban Demographic; (2) Land and Urban Planning, (3) Environment and Urbanization; (4) Urban Governance and Legislation; (5) Urban Economy, and (6) Housing and Basic Services. This national report would not reflect the commitment from the head of the Nation, as was presented as the documents from Habitat Agenda. This new format is seen as the elaboration and the reformulation of the commitment of Habitat Agenda, specifically on adequate shelter for all and sustainable human settlement. The shift from the field of housing and settlements towards sustainable urbanization is in line with the transformation at the world scale. The world has become more urbanized, and generates its own problems and challenges for the future existence of the human settlements. UN Habitat views that the concentration of human settlements for the next two decades is sustainable urbanization.

The process of writing Indonesia‘s National Report on the Implementation of the Habitat Agenda began early 2014. A national team was formed, led by the Ministry of Public Works. The team consisted of a steering committee, panel of experts and consolidating team to edit and finalize the report. In 2014, three workshops were held prior to the submission of the first draft of the National Report in September 2014. The workshops were held in three different cities to allow wider participation of local experts and stakeholders. The workshops were aimed to identify progress of the implementation of the Habitat Agenda, key issues and challenges for future urban development in the six themes.

A series of focused group discussions were held during 2015, involving the consolidation team (as major editors) and inviting prominent experts to gain inputs on the draft and finalize the report. The team decided to separate the issues on future challenges and new urban agenda from the 6 theme chapters, into separate chapters. These two chapters are most important as they will be inputs for the New Urban Agenda. In other side we have encountered challenges and problems in the process of writing National Report. One major problem in writing this report were lack of data as requested in the list of indicators. We recommend that the New Urban Agenda will be supported by clear indicators that can be adapted at the national and local level. Another problem is that urbanization is multi-sector and national policies and strategies on urban issues in Indonesia are by under different Ministries. This requires stronger efforts for coordination and compilation of the report.

We thank The Government of Indonesia for hosting the Habitat III Regional Meeting for Asia and the Pacific, and the Third Preparatory Committee Meeting, jointly with the City Government of Surabaya. We are very thankful for the active participation in the process and organization of all engagement activities, such as: Urban Breakfast, Urban Journalist Academy, and the National Urban Forum, which above all helped strategizing participation in the Habitat III process.