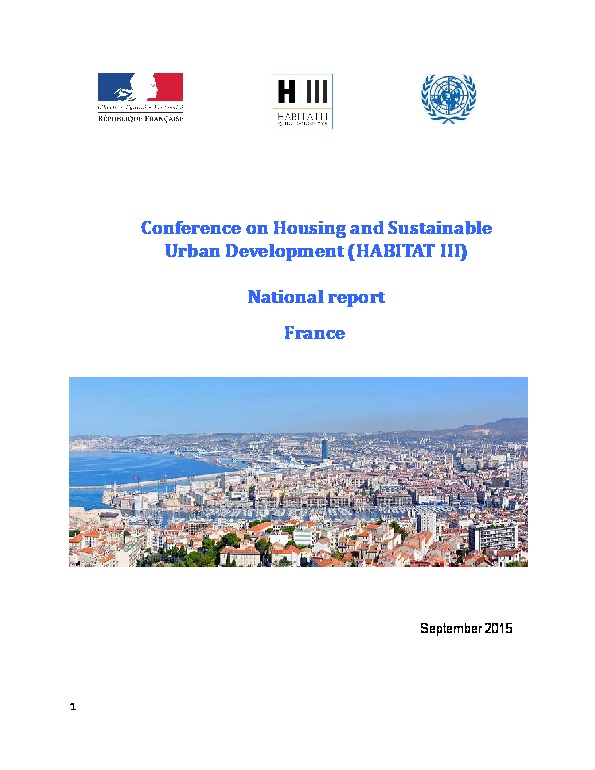 In France, the rate of urbanization4 has changed little. It sits at around 78%, which is the European average. Large cities, however, continue to see demographic growth, at the rate of approximately 0.5% a year over the last ten years. However, in 2011, 95% of the French population were living under the influence of cities, which contribute to local growth and cohesion. They therefore represent a strategic challenge for France. This urbanization of the national territory is organized through a framework of cities of all sizes. This framework has Paris at its centre, followed by the eleven conurbations most affected by the process of metropolization and the other regional and departmental capitals/cities connected to the other urban centres under their influence. All these urban areas have interdependent relationships with each other.
At the same time, the reality of French cities is evolving through a dual criteria of density and diversity, in which some relatively specific urban areas stand out: dense city centres that contain very different socio-economic categories and activities, problem neighbourhood (densely populated but with an essentially residential, poor profile) and suburban areas that are not densely populated.
This reading of the way predominantly urban areas operates highlights two main challenges for the next few decades. The first, which is systemic in nature, consists in reinforcing the role of the city as an economic driver and its capacity to be more efficiently integrated into the national and international networks. Taken as a whole, the main French conurbations are not significantly behind their European counterparts, particularly given the strategic leadership role played by France’s capital region. Taken individually, however, they demonstrate average performance with a low level of specialisation; 78% of them have an average European profile and are predominantly “service”-oriented. To meet this challenge, the development of operational strategies for bringing French conurbations into networks at local and regional level must be a priority for combining and coordinating their potential, their productive functions and for bringing predominantly rural areas along with them.
The second challenge is related to the scale of each of the French conurbations (i.e. their urban area5) in terms of regional sustainable development and equality, which means meeting three main challenges: urban sprawl, the development of regional inequalities and institutional fragmentation, which harms good local governance. Urban sprawl results from the growing suburbanization of territories and man-made landscapes (see the map of man-made surface area created between 2000 and 2006 listed in chapter II Urban and Regional Planning) which has reinforced the interdependent links between urban areas and their rural periphery. The density is therefore 400 inhabitants per square km on average in the urban area, compared to 600 up to 1962. There are many problems posed by the suburbanization of local areas: saturation of the transport infrastructure, increased commuting travel time, fragmentation of local areas, takeover of natural spaces, modification to the landscapes that represent the French lifestyle, in particular the commonplace appearance of suburban landscapes, increase in the costs of amenities and facilities, pollution and disturbances of all kinds, etc.

The second challenge highlights significant disparities within the conurbations and between French conurbations. According to INSEE, the large French urban areas, of which there are 241, occupy a fifth of the French territory and contain nearly 80% of the population. 47.9 million people live in urban and suburban areas, 5.5 million in the new City policy priority districts (including just over 0.6 million in Overseas Territories). In 2014, the unemployment rate for 15-64 year-olds was 26.7% in these priority neighbourhoods (Quartiers prioritaires de la politique de la ville- QPV), i.e. nearly three times higher than that of their surrounding urban units. For 15-29 year-olds, the unemployment rate was 38.4% compared to 17% for the surrounding urban units. The QPV contain a majority of people on low incomes, i.e. less than 60% of the median income per household unit. They are characterised by significant sociospatial segregation, as the ratio between the average financial income per household unit and that of their conurbation was 47.4% in 2011. More generally, this urbanization also highlights the persistence of regional inequalities, even the emergence of new ones, related to recent changes (economic, social, technological, demographic, environmental, cultural, etc.). These differences between regions are apparent on
several levels. The inequalities are exacerbated at sub-regional level between centres of conurbation, the suburban fringes and the rural areas, which are marked by difficulties in some sections of the agricultural economy, an ageing population, reduced employment, particularly in the public sector, and industrial restructuring.
The most important differences, however, lay between the metropolitan regions and the ultraperipheral regions (régions ultrapériphériques - RUP). These overseas regions have to deal with common specific problems, such as distance, insularity (excluding Guiana), small surface area and high demographic pressure, difficult geography and climate, lack of valuable surface area, conflicts in use and resources, intensifying agricultural practices (challenges of managing large natural areas), delayed investments in policies relating to water, sanitation, waste management, risk management in particular meteorological risks, etc.
The third challenge is that of optimizing the governance of French conurbations. This is one of the keys to maintaining and improving the competitiveness and cohesion of these areas and the predominantly rural areas under their influence. The institutional fragmentation noted in urban areas by the public inter-municipal cooperation organizations and assessed either in terms of their urban unit (area of dense conurbation expressed through continued construction) or their urban area (urban unit and suburban periphery) must be reduced to enable these territories to meet the challenges and trends detailed above6. This will enable urban areas to draw up relevant, coherent projects and share methodological and operational tools.

We thank France for contributing to the Habitat III Trust Fund and for leading the the Bureau of the Habitat III Preparatory Committee as the co-chair, guiding the process innovatively and inclusivly.