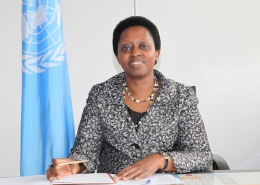 Dr. Aisa Kirabo Kacyira of the Republic of Rwanda is the Deputy Executive Director and Assistant Secretary-General for UN-Habitat. In this role, she has been providing critical leadership to promote sustainable cities and human settlements globally engaging widely with governmental and non-governmental actors. Among her many important responsibilities, Dr. Kacyira is supporting Dr. Clos in advancing the key reviews currently under way at the Programme, including the review of its strategic priorities for the coming years leading to Habitat III in 2016. Dr. Kacyira has a broad knowledge and experience of more than 15 years in senior management and strategic leadership in Government and non-governmental institutions, both national and international. Before joining UN-Habitat at the end of 2011, Dr. Kacyira was the Governor of the Eastern Province, the largest province in Rwanda with a population of 2.5 million. She has also overseen the development and urbanization of the Province, which borders the capital, Kigali, in a sustainable manner. Dr. Kacyira has facilitated strategic planning in line with Government policy, while overseeing effective and efficient use of resources, capacity-building and service delivery. Her skilled fostering of regional diplomatic and cross-border trade relations is essential as UN-Habitat’s new urban agenda is embraced by its partners. Previously, she was Mayor of Kigali (2006 - 2011), one of the fastest urbanizing cities in the world. Under Dr. Kirabo’s leadership, Kigali won the UN-HABITAT Scroll of Honour Award in 2008 in recognition of high level of cleanliness, greenness, safety and the sustainable, affordable housing initiatives combined with pro-poor urban employment opportunities. As the agency undergoes an organizational review, her experience in enhancing the city’s competitiveness amid major global challenges such as the financial crisis, climate change and others, has been beneficial to the Programme. Prior to her position as Mayor, Dr. Kacyira was an Elected Member of Parliament and member of the Parliamentary Standing Committee in charge of land use and management, settlement and environment. In this capacity, she actively participated in a range of legislative and over-sight functions in Parliament in addition to community mobilization on issues of critical importance to sustainable development. Dr. Kacyira is a former president and member of Rwanda Association of Local Government Authorities, former president and member of the Eastern African Association of Local Government Authorities, former vice president and member of the United Cities and Local Governments of Africa, and is a member of Rwanda Association of University Women. Dr. Kacyira was educated at James Cook University, Australia where she gained her Masters in Veterinary Science in Animal Production and Economics and at Makerere University, Uganda where she gained her Bachelor of Veterinary Medicine. She is married and has four children.