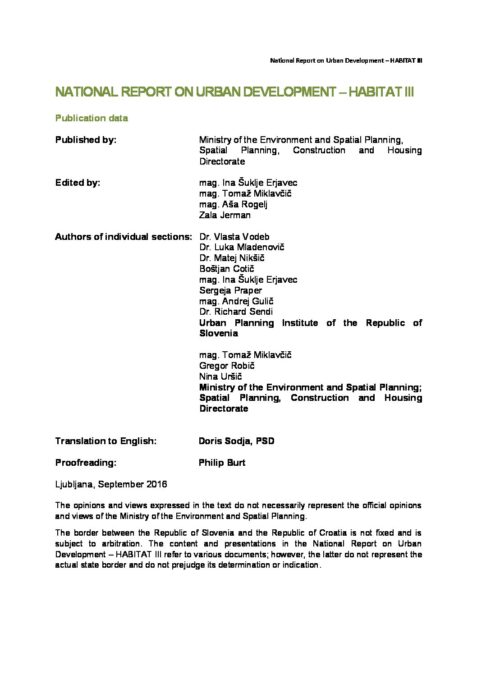 Demographic features influence population patterns and co-create spatial development and its use. Analysis and projections of demographic trends, such as the changing population number, their age and education structure, migration, household structure, form an indispensable basis for planning the rational and sustainable spatial development of cities, towns and the country. Slovenia is confronting a major phenomenon of the 20th century, the ageing of the population on the old continent. Population ageing is becoming a more significant challenge every year. The situation in Slovenia is not as alarming as in other western European countries yet; however, demographic projections and trends for Slovenia show that Slovenian cities and towns will have to deal with the consequences of demographic change in future decades, due to a decrease in the number of births, the prolongation of life expectancy and the reduction in the number of people in less developed and less accessible areas. In the next decades, Slovenian cities and towns will have to prepare the measures to mitigate the pressure on public finance and tackle the stagnation of living standards. The issue of population ageing is directly connected with young people, since the working population and young people are those who are most affected by the consequences of the ageing society. The report also summarises trends in migration. The negative consequences of demographic change can be mitigated with positive measures in this area.
The area of Slovenia is 2,027,300 ha, and has a pronounced polycentric settlement structure. Population density in 2014 in Slovenia was 101.7 people per km2. Only 5.4% of Slovenia's territory is built (Ministry of Agriculture and the Environment, 2014). There are 212 municipalities in Slovenia, which cover 6,035 settlements, where 2,062,874 people live (SURS, as of 1 January 2015).

The capital of Slovenia is Ljubljana, which is also its administrative and economic centre. Some 13% of Slovenia's population live in Ljubljana. According to population density, i.e. 14,871 people per km2, the Urban Municipality of Ljubljana stands out immensely. Ljubljana is also the major employment centre of Slovenia and encounters problems with regard to daily commuting.

Suburbanization is increasing in the region, encompassing settlements within a 25 km distance from Ljubljana. Suburban settlements near Ljubljana (Grosuplje, Kamnik, Mengeš, Vrhnika, Vnanje Gorice, Vodice, Ig, Domžale) have seen the highest population growth rates in Slovenia. Maribor is the second largest city in Slovenia, with a population of 112,325. Maribor is also surrounded by suburban settlements with a high population growth rate. In terms of population and size, Ljubljana and Maribor are followed by Kranj, Koper and Celje with 50,000 people, respectively, and Novo Mesto and Velenje with 20,000 people, respectively. The most densely populated settlement is the coastal city of Piran, with 17,857 people (in 2015). Globally, urbanisation is one of the main phenomena of the 21st century, because it is estimated that 70% of people will live in cities by 2040. The rate of urbanisation is quite an important factor when considering this issue in Slovenia, since here it is among the lowest in the EU, amounting to 50%. The share of people living in cities has remained the same since the 1980s. According to recent United Nations forecasts, this share will increase to 61% by 2050 (UN, 2014: 23).

Differing from other countries, where fast urbanisation is in progress, suburbanization and a low level of urbanisation are typical of Slovenia. The pronounced small size of Slovenian cities is also seen in the diversity of consideration of cities, towns or urban settlements in Slovenia and the EU. According to Eurostat, Slovenia has two cities: Ljubljana as a medium-large city and Maribor as a small city. In terms of the rate of urbanisation, 81% of Slovenian municipalities encompass very thinly populated areas; only Ljubljana and Maribor are considered as densely populated areas, whereas the remaining 18% of municipalities are categorised as intermediate density areas (Spatial typologies, 2011). The next feature of Slovenian settlements is spatial dispersion and low population; 95% of settlements have less than 1,000 people, 47% of settlements have less than 100 people and 59 settlements have none. More than 80% of the population live in Ljubljana and Maribor and in intermediate density areas, accounting for 19% of settlements. The relative weakness of Slovenian cities in the system of European urban centres is also further supported by the urban-rural typology of the EU, which determines three NUTS 3 categories of regions: »predominantly rural«, »intermediate« and »predominantly urban« regions (Urban-rural typology, 2011). Only the Central Slovenian region in Slovenia is categorised as »predominantly« urban. This is also reasonably connected to the findings of the ESPON 1.1.1 project, which categorised Ljubljana as the capital of Slovenia in the so-called MEGA 4 category, which was comprised of the 23 functionally weakest (small, less competitive, predominantly peripheral, with a smaller scope of human capital) metropolitan areas (Nordregio et al., 2005: 117).