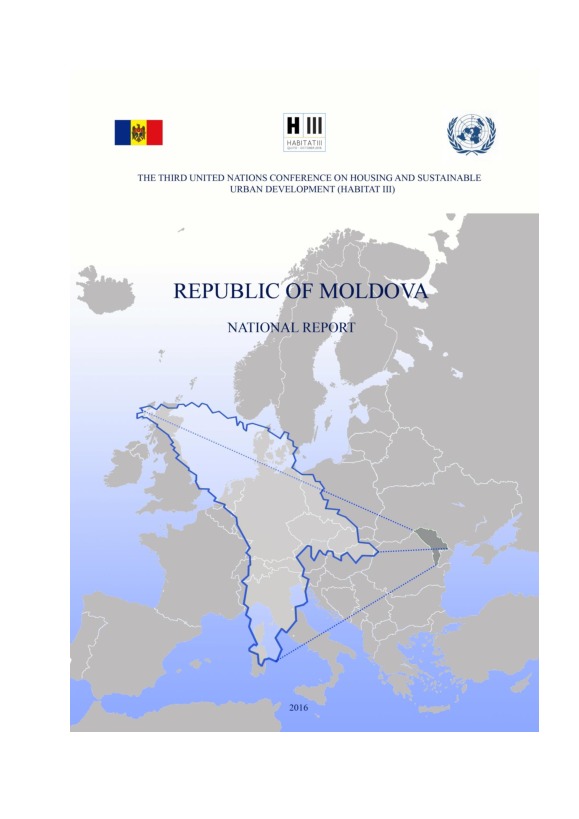 In the Republic of Moldova the Habitat III Conference is seen as an opportunity to globally assess the effectiveness of housing and sustainable human settlements development policies and efforts of the country. Moldova participated in the UN Habitat II Conference in Istanbul and had an action plan for implementing the Urban Agenda 1996. Over the past two decades since Habitat II, profound changes in Moldovan society and economy took place. The transition from the politically and economically centralized Soviet-type system to a rule-of-law-state with market economy has been completed. The institutional system of a sovereign state has been established, privatization of state owned property, including housing, has been completed. The Moldovan legislation has been cardinally revised and developed in line with the human rights, democracy and free market principles.

However, the armed conflict in the eastern districts of the country in 1992 and the unconstitutional regime establishment in these districts inhibited the functional relationships in the national network of settlements and economic structures. This, along with the almost total dependence on imported energy resources, low competitiveness of the old-style industry on the free market, as well as the cases of mismanagement during the transition process, had serious repercussions for the economy and living standards of the population, entailing emigration and threats to sustainable development. Implementation of Urban Agenda in Moldova faced major challenges. Urbanization slowed down and differences in the development rates of small towns versus the capital city Chisinau became vivid. Construction of housing slowed down, the quality of basic services provided to population, especially in small towns and rural areas, declined. Financial constraints and lack of human resources capacity were the main obstacles for the Government policies on housing and human settlements development.

The track record of the National Action Plan, developed during preparation for the UN Habitat II Conference, reveals both successes and shortcomings. Development and adoption of national legislation provided in the National Plan, of concepts and development plans, may be mentioned as accomplishments. A new legal framework on housing and basic services, spatial and urban planning activities, and real estate market has been established. Privatization of the state owned housing stock and establishment of privatized homes owners associations created the background for the development of the participative attitude of people towards maintenance of homes and common areas.

The powers related to settlement development were devolved to local authorities. An institutional system based on a new approach to regional development has been established and mechanisms to encourage improvements of energy performance in buildings are in place. All these developments had palpable, though modest, results which expressed themselves in better provision of housing and basic services, improved quality standards for new housing and decreasing number of sub-standard dwellings in terms of sanitary and safety requirements.

The backlog of measures planned in 1996 includes creation of financing mechanisms and implementation of projects requiring investment. Unfortunately, some problems and challenges outlined in the 1996 National Report, have exhibited to full extent over the two following decades, while measures to prevent and mitigate the consequences were inadequate. In addition, demographic decline and urbanization slow down, which were not identified as major challenges in 1996, influenced the entire development process of the country. A New Urban Agenda for Moldova should generally address the same problems, but in a broader context, new conditions and sometimes from a new conceptual perspective.

The authorities, expert community and representatives of Moldovan civil society have reached consensus on the concept of sustainable urban development. It will be secured through implementation of the overall objectives of the national strategies on economic growth, demographic security, administrative decentralization, equity and social inclusion. In turn, a polycentric and balanced urban network has to unlock the potential of cities as engines of growth and employment, of centers providing services to rural areas. This requires a balanced land-use management, targeting the sectorial policies and financing towards local urban challenges. Sectorial strategies and projects should support territorial cohesion through promoting the convergence of economies and infrastructures of the more developed and less developed territorial units. This will contribute to a more equitable access to opportunities, regardless of the place of residence, a more efficientmanagement of centre - regions and urban - rural linkages. This report sets out a number of objectives and concrete actions falling under the generally accepted concept, and implementation of which will be provided in the new Action Plan under the New Urban Agenda for Moldova. Secure housing possession rights are guaranteed in Moldova and there is no discrimination of any kind for access to housing. Most people own their homes. There are no problems neither with tendencies for marginal neighborhoods formation, nor with numerous goups of people without permanent dwelling place. However, improving quality of housing and availability of basic services, securing housing for vulnerable social groups, adapting the dwellings to the needs of people with disabilities, remain current challenges for the coming years. Ensuring security of dwellings and urban environment, disaster prevention, is also a challenge for Moldova which is prone to natural phenomena risks.

International cooperation has had a great importance for Moldova in meeting the assumed goals. Responsibilities and tasks to which Moldova has committed by joining numerous agreements and declarations under the UN aegis, serve as benchmarks for state policies. The UN program based assistance essentially contributes to development and modernization. The EU - Moldova relationships enhancement policy allowed the Republic of Moldova to benefit from the experience of Community states in the institutional system at central and local level, regional development, spatial planning, energy efficiency, technical standards in construction. The principles and approaches promoted by the EU directives are followed by the Moldovan authorities in the process of improving the legislation on housing and basic services. The EU assistance for Moldova is broad, diverse and of great importance. The Moldova-EU Association Agreement signed in 2014 opened new opportunities to enhance such cooperation.

This report has been prepared on the basis of government policy documents, sectorial development strategies, official statistical data, and analytical reports from various studies conducted by national and international experts with the support of international organizations. The Country Profile on Housing and Land Management developed with the support of the UN Economic Commission for Europe and the materials of the International Conference "Strengthening National Capacity for Sustainable Housing and Urban Development" held in Chisinau in 2015, should be particularly mentioned in this context. Drafting of this report was organized by the Ministry of Regional Development and Construction (MRDC) under the aegis of the National Commission for drafting the National Report of the Republic of Moldova for the UN HABITAT III Conference, created by the Government. The assistance provided by the Czech Development Agency contributed to the quality of the report. The draft report was reviewed by representatives of various central and local government agencies, as well as independent experts at the conference organized by the MRDC on 28 July 2016. The report preparation process contributed to the formation of a common vision of the public administration and civil society on the objectives of the New Urban Agenda fr the Republic of Moldova.