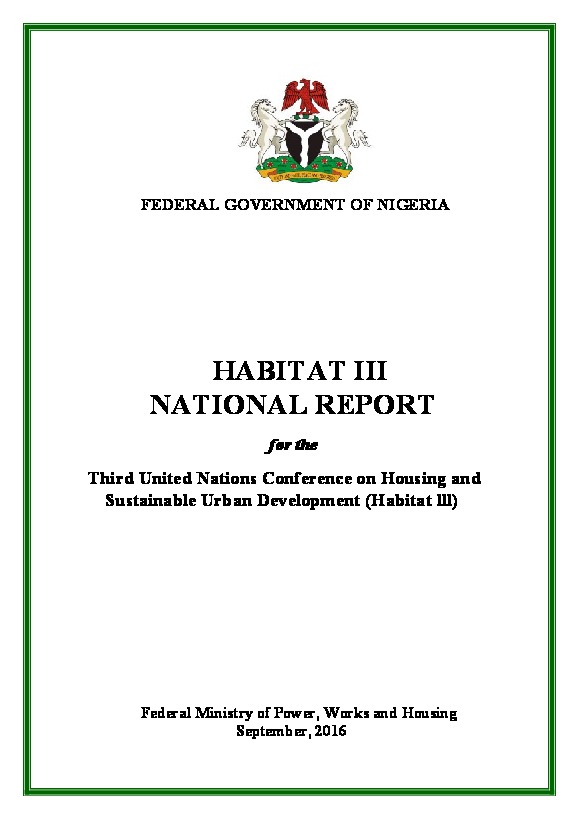 As urbanization rates continue to rise worldwide, the task of achieving sustainable and equitable urban development has become a critical challenge for most countries, particularly in the developing world where almost all of the new urban population growth is expected to occur. This poses significant challenges with serious implications for development policies, the quality of life of people and the environment.  In Nigeria, the Government at all levels is responding to this new urban reality by adopting measures to promote sustainable urban development, and to redress urban inequalities. There is a strong commitment to effective planning and management to ensure that Nigerian cities develop into centres of productivity and strong agents of social and political change.

Nigeria’s National Report reviews the progress and achievements in implementing the Habitat Agenda adopted at the United Nations Conference on Human Settlements (Habitat II) in Istanbul, Turkey in 1986. It sets out the imperative considerations in implementing the New Urban Agenda that will emerge at the United Nations Conference on Housing and Sustainable Urban Development (Habitat III) in Quito, Ecuador in October, 2016. The Report addresses six thematic issues: (a) Urban and Demographic, (b) Land and Urban Planning, (c) Environment and Urbanization, (d) Urban Governance and Legislation, (e) Urban Economy, and (f) Housing and Basic Services. Under each theme, the issues, challenges, and future priority actions for a New Urban Agenda are identified.

The Federal Ministry of Power, Works and Housing (which evolved from the former Federal Ministry of Lands, Housing and Urban Development) coordinated the preparation of the Habitat III National Report and the preparatory activities for the Habitat III Conference, with active support from the multi-disciplinary National Habitat Committee which was inaugurated on 20th February, 2014. The Report profited from fruitful exchanges and contributions of many Stakeholders, including Academic and Research Institutions, the UN-Habitat Programme Support Office, the Media, and the Private Sector, including CSOs, NGOs and CBOs. It also drew from the deliberations of the National Urban Forum held in Abuja on 13th and 14th October, 2014. The Forum was an integral component of the 2014 National World Habitat Day commemoration, and had the theme: ‘Planning and Managing Housing and Sustainable Urban Development in Nigeria in the Post-2015 Development Period.’  The Report also considered the commitments of the 2030 Sustainable Development Agenda with a focus on Goal 11 of building sustainable cities and communities, the Africa Agenda 2063 Vision, and other global urban development frameworks.

The task of managing human settlements in the 21st century is certain to increase in scale and dimension as urban centres continue to absorb the growing population and expand. Much will be required to be done. Towards this end, Nigeria will remain resolute in meeting the expectations of the people and upholding the principles of human dignity, equality and equity in pursuing sustainable urbanization that offers equal opportunities for all.