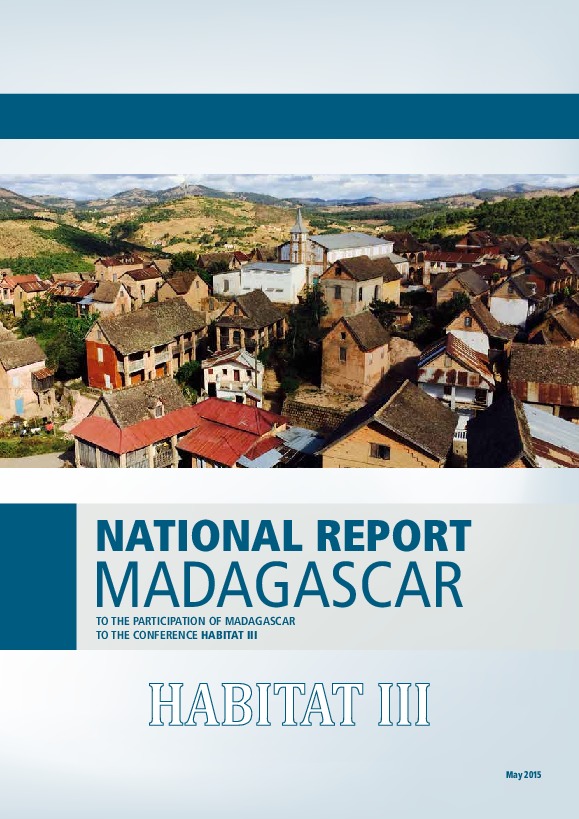 For five years, Madagascar was paralyzed by a political crisis. After holding the presiden-tial election in December 2013, Madagascar is starting into a new Republic. Since, the country has started to a process planning for policies and strategies for its development. And now, Mada-gascar has an official National Development Plan (PND).

By now, the vision for the country is “Madagascar, a modern and prosperous Nation”. This vision expresses the political will to work on all fronts to promote that is “strong and inclusive growth for an equitable and sustainable development of all territories”. The actions on human settlements contribute significantly to this vision. Besides that, these actions should be considered as national priorities through the National Land Use Planning Framework (SNAT), developed in 2008.

Thus, Madagascar does present its National Report in order to the Third United Nations Conference on Housing and Sustainable Urban Development HABITAT III. In response to resolution 24/14 of the UN-HABITAT Governing Council, and in line with the paragraph 11 of the General Assembly Resolution 67/126, the preparatory process of this National Report has been done with active participation of all relevant stakeholders.

A  Preparatory National Committee has been implemented, and started to work on February 2013. It has been changed legally into the National Habitat Committee in November 2014. This National Committee includes stakehol-ders through central and local governments, governments’ agencies, civil society, academics institutions and private sectors. The NHC has held several meetings and workshops, to the National Report’s consultation. The preparatory process included also regional and local consul-tations, which gathered the stakeholders in all the regions of Madagascar and some represen-tative cities. Such consultations have been held in Fianarantsoa and Mahajanga in March 2015. Afterward, a specific meeting with the Partners of Habitat Agenda is held in April 2015. Finally, the National Habitat Committed and the high level decision makers in the central government have approved the National Report in May 2015.