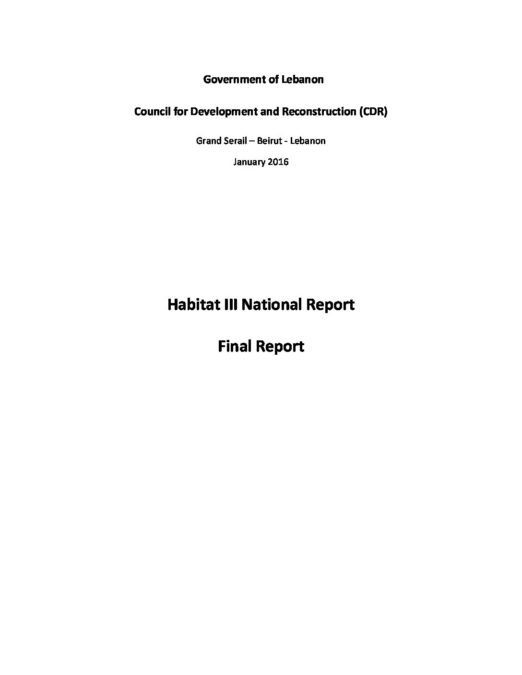 With the absence of a recent population census, figures on population in Lebanon are based primarily on estimations. In 2010, according to the World Bank, Lebanon’s population was estimated around 4,223,000 inhabitants. Population size has been increasing in the last thirty years with an estimate of 1.5% growth rate from 1980 to 2009. Prior to the Syrian Crisis, Lebanon had a population of 270,000 Palestinian refugees among other refugees and migrants. Since the onset of the Syrian Crisis in 2011, Lebanon’s population has further increased as it has become host to 1.5 million refugees from Syria.

Lebanon, with an area of 10452 km2, is a highly urbanized country with more than 87% of its population living in urban areas and 64% living in large urban agglomerations (Beirut and its suburbs, Tripoli, Saida, Zahle, Tyre). In the last fifty years, rates of urbanization have increased drastically. Urbanized areas went from 221 km2 in 1963, to 465 km2 in 1994 and 741 km2 in 2005. Urbanization is expected to reach 884 km2 in 2030. This growth has mainly developed around large cities, especially Beirut. However, in recent decades, secondary cities have become increasingly urbanized, with their populations mirroring this growth.

Urbanization in Lebanon is affected by many factors. For the sake of this report two types of factors are defined: endogenous and exogenous.

Endogenous factors include, among others, geography, the sociopolitical order or context, real-estate economy, emigration and laws and policies. At the geographic level, Lebanon constitutes a rich territory combining coastal and mountainous characteristics. Port cities still constitute essential components of the country’s demography and territory. Mountains, on the other hand, have historically hosted large numbers of settlements, which have, in the past, created a dynamic and prosperous economy. As an agricultural hinterland, small and medium towns have developed across Lebanon as points of social and economic exchange operating not only within the county but also as ‘relay’ agglomerations linking the coast to the deep Syrian hinterland.

As a complex context resulting from the assembly of various communities, Lebanon’s socio-political reality has resulted in fragmented urban and territorial development initiatives, leading to the duplication of infrastructures and facilities and to uncoordinated development. A series of wars and inner conflicts, most extreme of which was the Lebanese Civil War (1975-1990), have affected the sociopolitical order leading to urban sprawl, communitarian in nature, in the hinterlands and peripheries of large cities, creating a fragile fabric, and resulting in the destruction of large urban sectors and the reconstruction of new ones.

In this volatile context, real-estate created a “safe” valued commodity in a nearly unregulated market, causing the development of a rentier economy by allowing speculation and putting pressure on the housing market. The prominence of this sector has had various implications on urbanization including: gentrification in some historical neighborhoods; the domination of high-end developments; continuous urban sprawl and the development of informal neighborhoods due to increased pressure from poor income populations seeking access to central areas of large cities.

The real-estate economy has been further fueled by the high level of emigration in Lebanon that has, in turn, contributed to increasing rates of urbanization. Emigration has increased demand on housing, especially high-end housing, for local residence or as a speculative investment, resulting in large compounds, agglomerations and dispersed housing development. Furthermore, several laws and policies, or their absence, have largely impacted development, causing urban sprawl and high densification in particular areas such as Beirut central areas.

The main exogenous factors impacting urbanization include the unstable regional context and globalization. Lebanon is at war with Israel and surrounded by highly unstable countries, particularly bordering Syria. This has caused the: densification of existing refugee camps and the increase of informal tented settlements; destruction of urban sectors and depopulation of certain areas; and the massive displacement of population with a pressure on housing and construction markets, leading to rapid urban sprawl, densification and informal settlements.

Globalization is also a key factor causing large investments in certain economic sectors (especially real-estate, retail, tourism and services), and the influx of foreign workers. This encourages high-end residential, touristic, and commercial developments; development of multi-ethnic neighborhoods; and the sub-division of residential and historic buildings due to higher demands for small affordable housing units.

Actors that largely affect urbanization in Lebanon include: public, private and public-private partnerships. The main public actors are the Council for Development and Reconstruction (CDR); the Directorate General of Urban Planning (DGUP); and Unions of Municipalities (UoM). Private actors include faith based organizations, such as Waqf, and religious institutions; political parties; non-governmental organizations; academic institutions and research centers, and private developers.