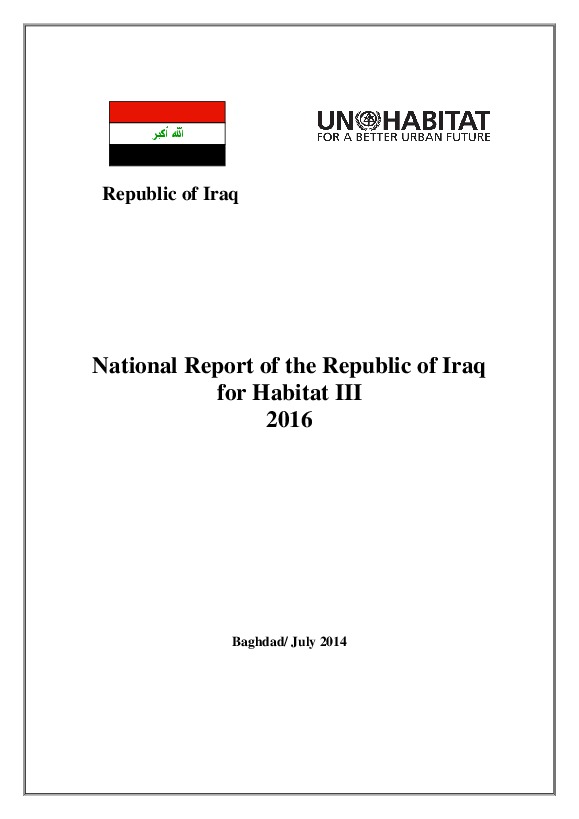 Urban demographic issues are addressed through the urban spatial development policy which essentially identifies urban agglomerations or centers for long-term development, it is integrated with the regional development policy which is a planning framework that identifies key trends for the distribution of material and human resources in the region to ensure effective goals of development and creating a situation of relative balance in the allocation of investments among different regions in order to reduce the phenomena of population concentration and spatial disparities in levels of development.

In addition, the spatial aspect of the development of cities and their population would ensure more effective participation by local authorities and communities in the development and follow-up of proper implementation of local development programmes.

The spatial economy model in Iraq shows Baghdad’s control as a dominant city at the urban structure level in 2007 as compared to other Iraqi cities. Its dominance was reflected in the results of most development plans. The total population of the second largest city after Baghdad constitutes 1/6 of Baghdad’s population and not 1/2 as determined by the well-known Zipf’s Rule.

Since the city of Baghdad is still in the first position, the urban system for Iraqi cities is likely to relatively improve during the next five years due to the balanced redistribution of allocations and the spatial relocation of development and investment projects. A hierarchy ranking system for Iraq’s cities has been put in place for the period 2013-2017 according to COSIT’s population projections for Iraq’s major cities based on the findings of the 2009 enumeration process, (table no.1). The hierarchical ranking is improving gradually with the increasing growth of important cities such as Basra and Sulaymaniyah.

Despite the persistent dominance of the main traditional urban centers in Iraq, the urban system has indicated a positive evolution with the increasing growth of a number of small and medium cities such as Talafar, Fallouja, Al-Ramadi, Karbala and Al-Samawa although the dominance of large cities is still a central characteristic of the urban system in Iraq.

1. Spatial disparities are persistent in Iraq where socio -economic progress is clearly concentrated in a limited number of governorates, or rather in large cities.

2. The growing movement of massive migration to the cities and the consequent impact on the pattern of spatial distribution of population.

Managing rapid urbanization is achieved through improving the hierarchy of urban system in Iraq.

1. Finding vacant areas or investment zones in all governorates outside city centers and providing them with their own residential complexes.

2. Exploiting the comparative advantages of medium and small sized cities and orienting investment and infrastructure towards them.

3. Establishing new and satellite towns around large cities especially around those having future expansion constraints.

4. Orienting spatially neutral activities such as universities, colleges and technical institutes towards small cities or cities with low growth.

5. Relocation of storage and industrial activities from city centers, large ones in particular, to outskirts and small and medium cities based on environmental friendly planning grounds.