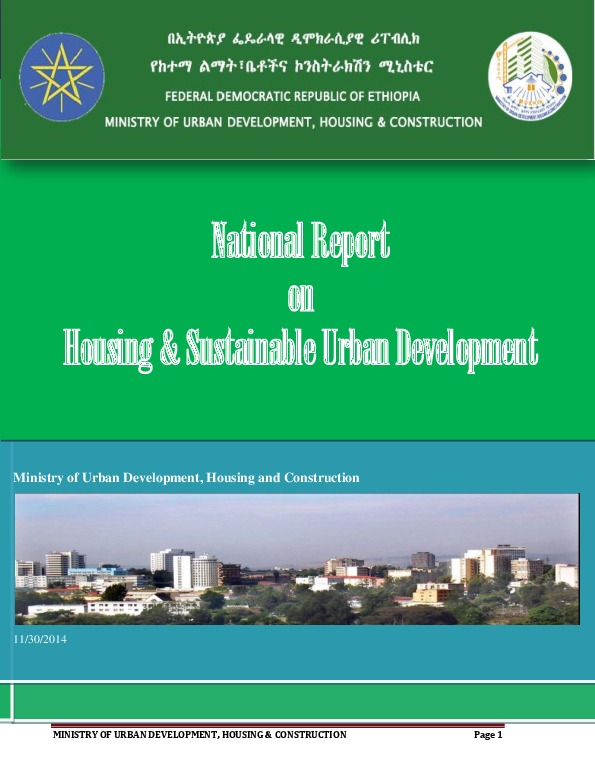 The increase in urbanization and its potential role requires the creation of a more dynamic nonagricultural economy through raising the profile of the urban agenda as a possible resource for growth and poverty reduction. Recognizing the importance of achieving a balanced urban system would certainly become a necessary concern for government as it would offer an opportunity for increasing market integration by facilitating exchanges and the division of labor, as well as facilitating partial or complete diversification in the non-agricultural sector. Further, cities could offer the opportunity to deliver services more cheaply and can act as poles of growth, thereby playing an important role in poverty reduction.

The increase in the economic weight of towns in Ethiopia is also reflected in increased concentration of people in urban areas. However, this does not seem to have been accompanied by a reduction in poverty in urban areas. Available evidence has shown that there are limitations in access to services in urban areas, suggesting that the pace of urbanization has been faster than the increase in service delivery. On the basis of cross-country evidence it can be supposed that this has been particularly the case in smaller, secondary cities where resources might be more limited, administrative capacity weaker and where migrants arrive directly from rural areas, without many assets and skills which might help them in the urban economy. For the benefits that cities can provide to materialize, several pre-conditions need to be put in place. This particularly relates to the existence of well-functioning markets for land, labor, and services, with efficient information flows. On some of these fronts, progress has been made in Ethiopia.

The urban landscape is evidently lacking in those qualitative elements that combine to produce attractive built environments, provide public amenity and enable satisfactory urban lifestyle. Many of these elements demand significant investment which is constrained by resource limitations. However, many other elements are primarily dependant on the creative aspects of urban planning and design, which are evidently lacking. Amongst other elements, one may note: The Urban Structure – most towns and cities in the country retain and display distinct legible structures, most are moulded to strict grids or hierarchies. The Urban Fabric – whilst it is to be expected that much of the urban fabric is poor and degraded, even the newer elements of the urban landscape are generally bland. The design of public facilities is generally distinctly lacking in creativity and imagination (and apparently also functionality). Major new commercial developments in Addis Ababa appear to be randomly distributed over the skyline and are probably directed more by the availability of vacant land than by development guidelines. The Public Domain is largely preserved but only partially developed given resource constraints. When developed the emphasis appears to be directed almost exclusively on functionality indicating engineering determinism and the absence of urban design input; impacting directly on the quality of public space and restricting effective contribution to the urban fabric and the built environment. Ethiopia retains significant resources in a number of fields, which if utilised and properly deployed could significantly improve the Quality of Life of the urban population.

The political responsibility for urban development is devolved to regional states; nevertheless, the Ministry can play an important role. In particular it should; Develop and promote a vision of municipalities, their future role, and responsibilities in the economic and social development of the country, the role of the federal government and the state administrations in the urban development process, the role, and importance of the private sector, civil society, and NGOs, Create an enabling framework for urban and municipal development; a municipal financial system that allows municipalities to perform their functions while preserving their autonomy; an Urban Development Fund or credit system that encourages improved performance within municipalities; a constitutional guarantee for municipalities at the federal level; Develop vision statement and policy options concerning the role of Addis Ababa and regional towns in order to achieve a more balanced regional development; Promote greater involvement of the private sector (Town Planners, Consultants, Contractors, etc.) in urban development activities and to improve efficiency as well as alleviate capacity constraints; assess the impact of federal economic and social development policies on urban centers and their development so as to propose modifications as needed and support capacity building at the municipal and regional level; promote applied research and the exchange of experiences.

Ethiopia has yet to establish and strengthen a housing finance sector that is flexible and diversified in providing loan for the construction of housing. In particular, improving access to housing finance for the majority of low-income urban households to own affordable houses remains a serious challenge. The effort to building low-cost condominium houses that are affordable by low-income residents through the government's large-scale Integrated Housing Development Program is an experience that deserves close examination. In this respect, while the construction of the condominium houses was at low-cost it seems that many low-income urban residents cannot afford owning the houses. An indication to this is the low-ability to effect the down payment within many regional towns because of which implementation is now suspended. One major lesson to be drawn from the experience is the need to design national programs taking into consideration the specific needs and capacities of residents in different local areas.

Ineffective utilization of land resources by allowing low density, urban sprawl; Low density instigates higher travel demand and by implication imposes higher load on the environment. Ineffective measures to conserve soils; Usage of inappropriate mechanisms to direct runoff water; reduction of water seepage to the ground as a result of over-surfacing of urban grounds; inappropriate run-off water management and increased soil erosion and degradation of lands in and around urban areas are some of the urban development challenges in Ethiopia.

Lack of control mechanisms for conveyance and treatment of raw water; high water pollution: improper handling of water resource from production to the consumption level; Lack of diversity in energy use: Heavy dependence on biomass energy leading to deforestation and minimization of parks around urban centers; and minimal usage of renewable resources in urban areas. Vehicular emission is on the increase; traditional technology in domestic energy use produces high air pollution; inappropriate technology usage in industries produces high air pollution.

Increased solid waste generation with inefficient utilization of resources; prevalence of wasteful practices and waste generating habits; lack of recycling habit and technology, lack of differentiating waste by type, lack of awareness of dangers from waste etc. and lack of Lack of minimum standard for sanitary provisions and inappropriateness of onsite sanitation facilities for dense settlements; inadequacy of sanitation facility for residents; gross lack of public bathing facilities; lack of public toilets in central areas; lack of awareness about environmental hygiene; lack of proper de-slugging methods; and limited capacity of municipalities and minimal participation of private sector operators in sludge collection are some of the critical issues that should be addressed in the future urban agenda of Ethiopia.

In this regard efforts should be directed at strengthening of organizational and human resource capacities of urban local administrations. The development and implementation of a sustainable urban infrastructure and housing finance system should form as a critical element of future urban development implementation strategies. Here the primary focus should be on improving domestic savings and revenues for infrastructure and housing developments. The experiences so far with regard to public participation in planning, delivery, and management of infrastructure, housing, and services as well as other governance issues need to be consolidated further in the future. Finally the undergoing initiatives of strengthening the urban planning, design and construction capacities need to be consolidated further to ensure better quality, cost efficiency and productivity in infrastructure and housing delivery.