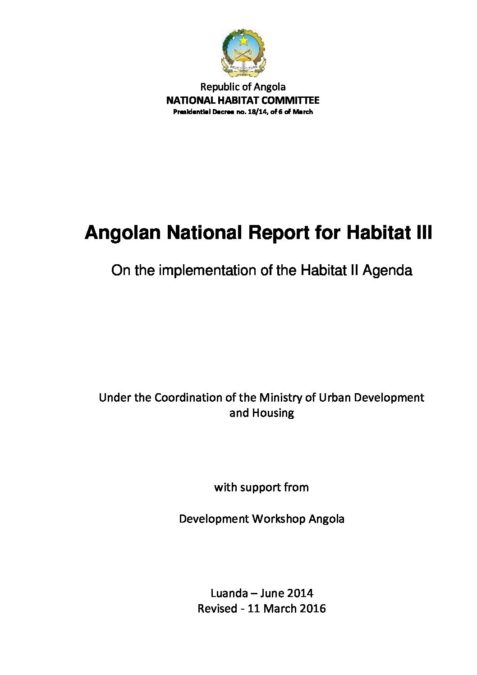 This Angolan Draft National Report reviews the implementation of the Habitat II agenda and other relevant internationally-agreed goals and targets. It also discusses new challenges, emerging trends and a prospective vision for sustainable human settlements and urban development.

When the Angolan mission to the Cities Summit in Istanbul signed on to the Habitat Agenda in 1996, the country was still in a state of conflict (the Angolan civil war only ended in 2002). Until that time, Angolan cities were the place of refuge for internally-displaced persons, and urban infrastructures became increasingly overloaded. Only after the peace accords were signed in the city of Luena that year, was Angola able to begin to invest its resources on national reconstruction. Peace coincided with increases in commodity prices (particularly oil), and new investments from China and other countries. The period was also one of rapid economic growth, particularly until Angola’s first post-war elections in 2008. This was also a period of legislative reform when new land, urban planning, and decentralisation laws were published.  A national poverty reduction strategy was adopted in 2004 and an urban poverty monitoring system was set up.

The elections in 2008 marked a transition from post-conflict reconstruction to a focus on social and economic development. A number of new government initiatives were launched that broadly aimed to achieve or surpass targets set in the Millennium Development Goals. The Water for All Program committed the government to deliver water to 80% of peri-urban and rural settlements and to 100% of residents in the cities.The National Program of Urban Development and Housing (PNUH) has been promoting access to decent housing and basic services to the citizen, having as strategic option for the gradual development of a real estate market where the State has the responsibility of providing the basic infrastructure, social equipment and the promotion of a competitive real estate market environment, inclusive and participatory.

The National Report of Angola to the Habitat III has as reference the years 1996 (approval of Agenda Habitat II in Istanbul) , 2002 (range of effective peace in Angola) and 2008 (launch of the National Program of Urban development and housing), to monitor the progress made by the country in compliance with the targets established in Agenda Habitat II.

Annexed to the report is data from a study on the perception of Angolan urban residents that asked them to rank their priority concerns related to the cities where they live and the issues they consider most important.  The Urban Perception Study was conducted in Luanda, Cabinda, Huambo and Ondjiva. The results are disaggregated by gender.