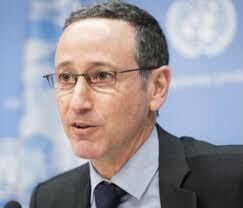 ¨    Robert Glasser is the Special Representative of the Secretary-General (SRSG) for Disaster Risk Reduction. ¨    From 2008 to (March) 2015 he was the Secretary General of CARE International, one of the world’s largest non-governmental humanitarian organisations, active in over 80 countries. From 2003-2007, Dr Glasser was the Chief Executive of CARE Australia, overseeing aid programmes in Cambodia, Vietnam, Papua New Guinea, and in the Middle East, among others. ¨    Prior to joining CARE, he was Assistant Director General at the Australian Agency for International Development (AusAID) where he held responsibilities in a variety of areas including the Papua New Guinea and Mekong programmes, Corporate Policy and Infrastructure and Environment. Dr Glasser has also worked on international energy and environmental policy for the US Department of Energy and on peace and conflict issues at a variety of institutions, including the Cornell University Peace Studies Program and the Centre for International and Strategic Affairs at the University of California. ¨    He was formerly the Chair of the Steering Committee for Humanitarian Response, comprised of the Chief Executives of the largest international Non-Government Organisations involved in humanitarian relief, a member of the Advisory Panel of the Climate Vulnerability Monitor 2012, a member of the Principals Steering Group of the United Nations Transformative Agenda for Humanitarian Action; and a member of the Project Steering Group for the World Economic Forum project on The Future Role of Civil Society. Dr. Glasser has also been a member of the board of the Global Call for Climate Action (GCCA), and was the inaugural Board Chairman of the CHS International Alliance, a new organisation resulting from the merger of People in Aid and the Humanitarian Accountability