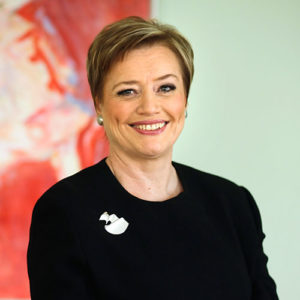 Ritva Viljanen serves as Deputy Mayor of the City of Helsinki, in charge of Educational and Cultural Affairs. Before becoming Deputy Mayor, Mrs. Viljanen was Permanent Secretary of the Ministry of the Interior (2003–2012) and Director General of the Population Register Centre (1997–2003). Prior to that, she held various offices at the Ministry of Finance, the Ministry of Justice and the Ministry of the Interior. Mrs. Viljanen has held positions in numerous Finnish committees and working parties. At present, she is among other things, the Chairperson of the Trustees of the Helsinki Music Centre Foundation and of the Steering Group for the Central Library project, and a member of the Supervisory Board of the Finnish Cultural Foundation. She also was the Chairperson of the international architectural competition for the design of the Helsinki Central Library.