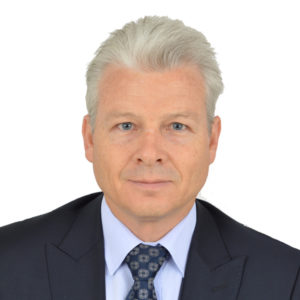 Rafael Tuts is Director of Programme Division of UN-Habitat, based at its Headquarters in Nairobi, Kenya. He is overseeing the work of UN-Habitat’s seven thematic branches and four regional offices. From 2012 to 2016 he was coordinator of the Urban Planning and Design Branch of UN-Habitat, promoting compact, integrated and connected cities that are inclusive and resilient to climate change. From 2014-2016 he was also overseeing the Housing and Slum Upgrading Branch of UN-Habitat, with a focus on the ‘Housing at the Centre’ approach and the Participatory Slum Upgrading Programme. Earlier assignments for UN-Habitat include his tenure as Manager of the Localising Agenda 21 Programme, the Global Campaign on Urban Governance and Chief of the Training and Capacity Branch. Following the Rio+20 Conference, he coordinated UN-Habitat’s engagement in the formulation of the Sustainable Development Goals. He authored and co-edited several publications on a wide range of sustainable urban development topics. This includes ‘Urban Trialogues’, a book reflecting on visioning, action planning and co-production of urban space as a resource for sustainable development, based on the experiences of the Localizing Agenda 21 Programme in intermediate cities in Morocco, Kenya, Vietnam and Cuba. Together with colleagues from the World Bank, UNEP and Cities Alliance, he received the World Bank Vice-President Team Award in 2011 for global partnership building on Cities and Climate Change. He also received ISOCARP’s 50th Anniversary Award in 2015, in recognition of UN-Habitat’s urban planning work. Before joining UN-Habitat in 1995, he worked for the Department of Architecture, Urbanism and Planning of the University of Leuven in Belgium and the Housing Research and Development Unit of the University of Nairobi. In 1985, he obtained a Masters of Science degree in Architectural Engineering from the University of Leuven.