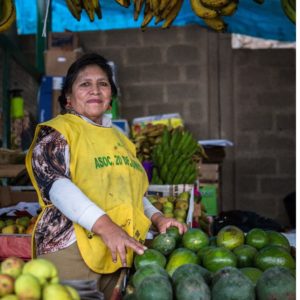 Gloria Solorzano is the leader of National Network of Self Employed Workers (RENATTA, Red Nacional de Trabajadores y Trabajadoras Auto-Empleadas). She worked for more than 30 years as a street vendor in the área surrouding the Wholesale Market of fresh produce in Lima, Perú. She led the organization of street vendors of that area “7 de junio”, and later formed the Network of Women (Red de Mujeres), which integrated not only Street Vendors but also Home-based workers, and waste-pickers of Lima. RENATTA is an expansion of that work and includes associations of several kinds of urban workers who perform their jobs in public spaces from Lima and 7 other regions of Peru. Gloria has been part of negotiations with the Metropolitan City Government of Lima, Perú, for the new Regulation for Street Trade, passed by that Government in 2014. She also has been a Speaker representing Informal Workers and Elections Debates for Mayor of Metropolitan Lima, and for MPs and President of Peru. Mrs. Solorzano has participated as a Speaker in the delegation of Informal Workers at the International Labor Conferences of the ILO in Geneva, in 2014 and 2015, which focused on the Transition from the Informal to the Formal Economy.