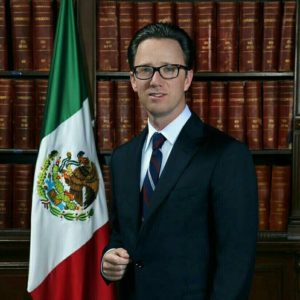 Banck Luis Serrato graduated from the Universidad Iberoamericana and Georgetown University, where he specialized, first degree and later at the Masters, on issues related to Public Administration, Public Policy and International Economics. Her master's thesis on the negative effects on income distribution arising from trade liberalization in Mexico, was published by the Georgetown PublicPolicyReview.   He worked in related air Social Development at the three levels of government as well as in the Senate and the World Bank. In the private sector, he was Executive Director in one of the more important financial companies in the country.   He has been an assistant professor of Macroeconomics at Georgetown University, Professor of Statistics for Economists at the Pan American University, and professor of current issues in Public Administration at the Universidad Iberoamericana, Golfo Centre.   He worked for the World Bank in the Department of Social Development for Latin America, particularly in the cities of San Jose, Costa Rica, Rio de Janeiro, Brazil, Lima, Peru and Mexico City.   In the state of Puebla, among other positions, he has served as Undersecretary of State Social Development, Director General of DIF, Secretary of Social Development of the City of Puebla, Secretary of Social Development and Minister of Infrastructure and Transport of the State of Puebla.   During his tenure in public administration, airline under its responsibility have won the National Award for Education Max Shein to boost the quality of teaching in public schools, the International Award Americas United Nations for the development of literacy programs in communities poor and the National Habitat Prize Fight Urban Poverty.