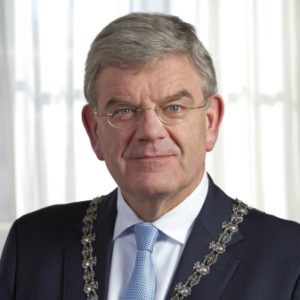 Jan van Zanen was born in 1961, and spent his childhood in the city of Edam-Volendam. After Grammar School (classical teaching Gymnasium), he completed his law studies at the VU University Amsterdam and at Cornell University Law School in Ithaca, New York, USA. He did his military service as an officer at the Dutch Royal Air Force, and subsequently filled the position as legal and executive secretary for a National Employer’s Association. Member, on behalf of the People's Party for Freedom and Democracy (VVD), of the Municipal Council of Utrecht between 1990 and 2002, he was appointed Alderman of Financial and Economic Affairs, Public Space and Monuments in 1998, which he remained for seven years. Between 2003 and 2008, he was national chairman of the VVD.  Mr Van Zanen was Mayor of Amstelveen between 2005 and 2013. Since January 1st 2014 he is Mayor of Utrecht, and since June 3rd 2015 he is charmain of the Association of Netherlands Municipalities (VNG).