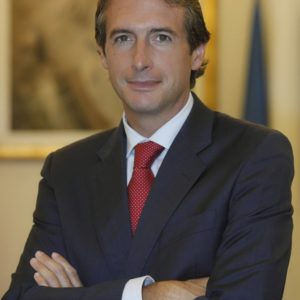 Inigo de la Serna Hernáiz is engineer of Roads, Channels and Ports, a graduate of the University of Cantabria. He has been mayor of Santander since 2007. He worked in a private enterprise, as head of the Department of Hydraulic engineering in the company Apia XXI, between 1995 and 1999. He was then appointed director of cabinet of the Minister of Environment, Government of Cantabria from 1999 to 2003. He held the position of Councilor for the Environment, Water and Beaches of the Santander Municipality during the 2003-2007 term. He was regional deputy between 2007 and 2011; and again in the current 2015-2019 legislature.
He was president of the Spanish Federation of Municipalities and Provinces (FEMP) from July 2012 to September 2015 and has led the Spanish Network of Smart Cities (RECI) since its founding in 2012. He occupies the presidency of the Council of European Municipalities and Regions (CEMR). He is currently also first vice president of the Spanish Federation of Municipalities and Provinces (FEMP).