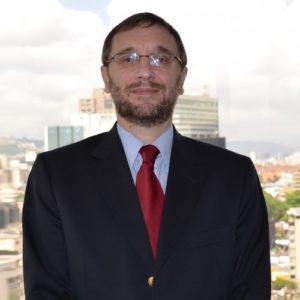 Pablo Sanguinetti is chief economist at CAF – development bank of Latin America and Professor of Economics at Universidad Torcuato Di Tella in Buenos Aires. He holds a MA (1989) and PhD (1992) degrees in Economics from University of California, Los Angeles. His research interest includes international trade and   integration, economic development and fiscal federalism. He has published articles in the Journal of International Economics, Journal of Development Economics, Regional Science and Urban Economics, Economics and Politics and in several other journals and books. He has occupied visiting scholar and visiting professor   positions at University of New Mexico (2004), University of Texas (A&M) (1999 and   2006), and University of Bonn (2004). He has been member of the editorial board of Latin American Research Review (LARR). He has worked as consultant for the World Bank, Inter-American Development Bank, the Economic Commission for Latin America and the Caribbean (ECLAC) and CAF– development bank of Latin   America. He has served as Member of the Board of the International Trade Commission of Argentina in 1996-2000.