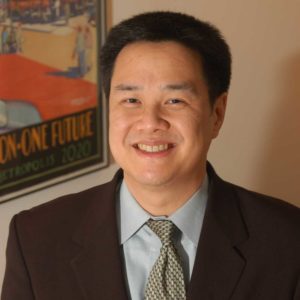 Don Chen leads the Equitable Development team, supporting urban development strategies to reduce poverty, expand economic opportunities, and advance sustainability in cities and regions in the US and developing countries—with a focus on shaping the delivery systems for affordable housing, community improvement, infrastructure, and city and regional planning.   Don joined the foundation in 2008 as a program officer and assumed the role of director in 2015. Previously, he was the founder and CEO of Smart Growth America, where he led efforts to create the National Vacant Properties Campaign and Transportation for America and managed a merger with the Growth Management Leadership Alliance. He has authored many pieces on land use, transportation, social equity, and environmental policy, including Growing Cooler: The Academic Evidence on Urban Development and Climate Change (2008, co-author) and “The Science of Smart Growth,” which appeared in the December 2000 issue of Scientific American. Don has also served on the boards of the Funders’ Network for Smart Growth and Livable Communities, West Harlem Environmental Action, the Environmental Leadership Program, and Grist magazine. He holds a master’s degree from the Yale School of Forestry and Environmental Studies and a bachelor’s degree in political science from Yale University.