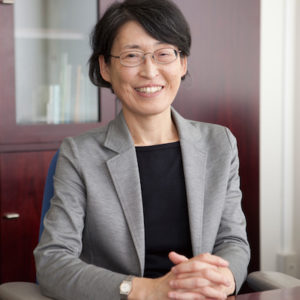 Chikako Takase assumed the position of Director of the United Nations Centre for Regional Development (UNCRD) in February 2012, after serving as Acting Director since March 2011. Prior to coming to UNCRD, she served as Deputy Chief of the Policy Coordination Branch, Office for ECOSOC Support and Coordination, Department of Economic and Social Affairs at the United Nations (UN DESA). She began her career at the UN in 1984, after serving as Associate Expert Officer in Jakarta for UNIDO. She first worked for the Projections and Perspective Studies Branch, Department of International Economic and Social Affairs, where she worked on medium-term forecasting, and at the Macroeconomic and Social Policy Analysis Division, Department of Economic and Social Information and Policy Analysis, where she was involved in monitoring developed country economies and in drafting the Department’s flagship annual publication, World Economic Survey. She later worked for the Division for Sustainable Development (DSD), Department of Policy Coordination and Sustainable Development, during which time she had an opportunity to work for the Secretariat of the Convention on Biological Diversity from 1996 to1999. While at DSD, she was involved in the preparation as well as organization of the World Summit on Sustainable Development, held in Johannesburg, South Africa in 2002. At DSD, her work mainly focused on changing consumption and production patterns. She holds B.A. in Liberal Arts (Economics) from International Christian University, Japan, and M.A. in Development Economics from the University of Sussex, UK.