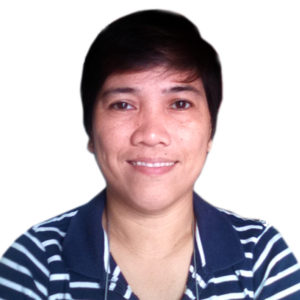 Cherry Delena Barnuevo has been elected as president of Damayan ng Maralitang Pilipinong Api last December 5, 2015. This is a federation of women-led grassroots organization located in the Philippines consisting of multiple community-based organizations countrywide.  She is also the current president of Alyansa ng mga Nakatatanda sa Komunidad, a community-based organization and also a women-led grassroots organization located in the Philippines. She is a 4th year Bachelor of Science in Computer Science undergraduate. Being the eldest among 6 siblings made her decides to stop studying and instead help the family face financial problems. She worked as a document analyst, transcript editor and online proofreader before being connected with Condor Data Services last 2005. She has worked with Condor Data Services as Operations Manager for 5 years. Condor Data is an onshore-offshore information management company based in California, with offshore operations in the Philippines. She stayed with the company for 8 years until its closure last 2012. Since then, she's been with Business Process Outsourcing companies for 4 years. It was year 2012 when she realized the "calling" of serving other people while working in BPO industry. She then volunteered in a community-based organization called Alyansa ng mga Nakatatanda sa Komunidad  (ANAK) which then later on became a member of DAMPA. She is now a volunteer with DAMPA because she strongly believes that women should be empowered to be more resilient than men because of traditional and cultural factors they face in their everyday lives. She volunteered with DAMPA because she has seen that DAMPA empowers women to be strong leaders in their community.