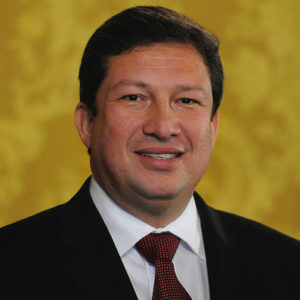 Cesar Navas Vera was born in Guayaquiil – Ecuador in 1974.

Mr. Cesar Navas was a Naval Officer from 1996 to 2012. Since 2011 he was the National Security Projects Leader, where he developed the first Ecuadorian integrated model for emergencies assistance, which was later inaugurated as the Integrated Security Service - ECU 911, and appointed as its National Director.  During this period he was able to bring the 911 service nationwide with the implementation of 16 operating centers, covering totally the Ecuadorian territory.
Since September 2014, he took up his role as the Coordinating Minister for Security of Ecuador, heading this strategic cluster that includes National Defense, Interior, Justice, Foreign Affairs, Risk Management, and ECU 911.