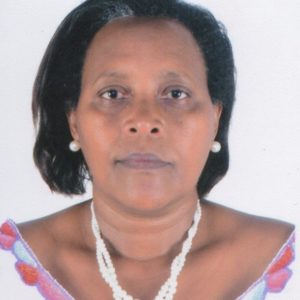 Catherine MABOBORI is journalist by profession. She is a peace and women’s rights activist. She has also worked with the government of Burundi. At her latest position until February 2014, she was senior advisor in charge of press and communication and spokesperson in the office of the First Vice President of Burundi. Ms Mabobori  has also been a member of Parliament( 2001- 2010).   Since 2006 , she is chairing an organization of women parliamentarians called Solidarite des Femmes Parlementaires ( SOFEPA) ,  an organization focussing on ensuring gender oriented laws and the mobilization of women for political participation .     In the area of women’s empowerment, Catherine MABOBORI is a founding member of a range of organizations including CAFOB, the coalition of women's organizations which includes more than 60 CSOs now. On behalf of CAFOB , Ms Mabobori coordinated the participation of a women 's delegation at the peace talks on Burundi conflict held in Arusha , Tanzania, resulting in a "gendered peace agreement”  , becoming the entry point  to ensure quota system in post transitional institutions and for the adoption of the national gender policy. Burundi is currently living again a political crisis which may lead to a wide spread political violence. Catherine MABOBORI is among a group of women who are mobilizing  to bring their contribution towards the search for solutions to the crisis which is shaking the nation , in reference to the content of R1325 national action plan.  Those women are mobilizing within the “Movement of women and girls for peace and security in BURUNDI”. She has two master degrees: one in human rights and conflict resolution and another in gender, society and institutions. For the moment, she is an independent consultant in gender and peace related issues.