The Government of the United Arab Emirates and the International Renewable Energy Agency (IRENA) hosted the Habitat III Thematic Meeting on Sustainable Energy and Cities on 20 January 2016. It was organized within Abu Dhabi Sustainability Week, the world’s largest annual gathering on clean energy and water, with over 30,000 delegates from some 160 countries, hosted by Masdar, and in close proximity with the IRENA Assembly (16-17 January 2016).

The Thematic Meeting provided official inputs on sustainable energy for Habitat III and took place against the backdrop of the COP21 climate negotiations and the adoption of the Sustainable Development Goals, which through Goal 7 enshrine commitments to achieve universal energy access, substantially increase renewable energy deployment, and double the rate of improvement in energy efficiency by 2030.

Cities today consume roughly two-thirds of the global primary energy supply and produce over 70% of the global energy-related CO2 emissions, making them the largest market for sustainable energy and the principal arena for climate action. Moreover, as population and economic growth accelerate urbanization, the demand in cities for clean, reliable, and affordable electricity, heating and cooling, transport, process inputs, and other energy forms will dramatically increase.

Energy is furthermore a central aspect of poverty eradication, with hundreds of millions of urban dwellers denied development benefits due to lack of high-quality energy access. In addition, renewable energy can contribute to key aspects of Sustainable Development Goal 11 on sustainable cities, such as air quality, waste management, safety and resilience towards disasters.

Building on the adoption of the Sustainable Development Goals and the outcome of COP21, the outcome document—with specific recommendations for the UN system and public and private sectors—constitutes an official input into the declaration and programming of Habitat III.

The Abu Dhabi Declaration is considered part of the official inputs to the Habitat III process.

Read the news release on the Thematic Meeting on Sustainable Energy and Cities here. 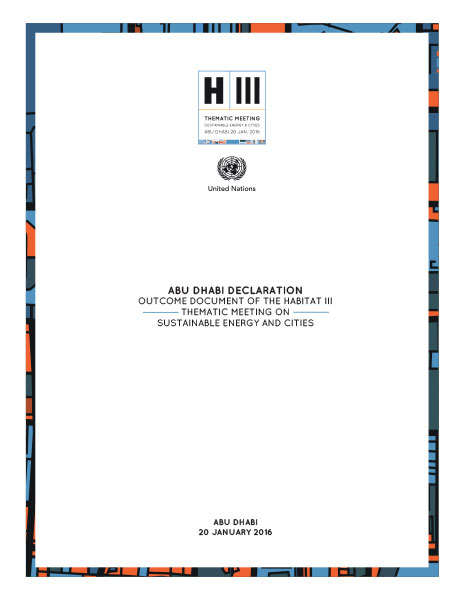