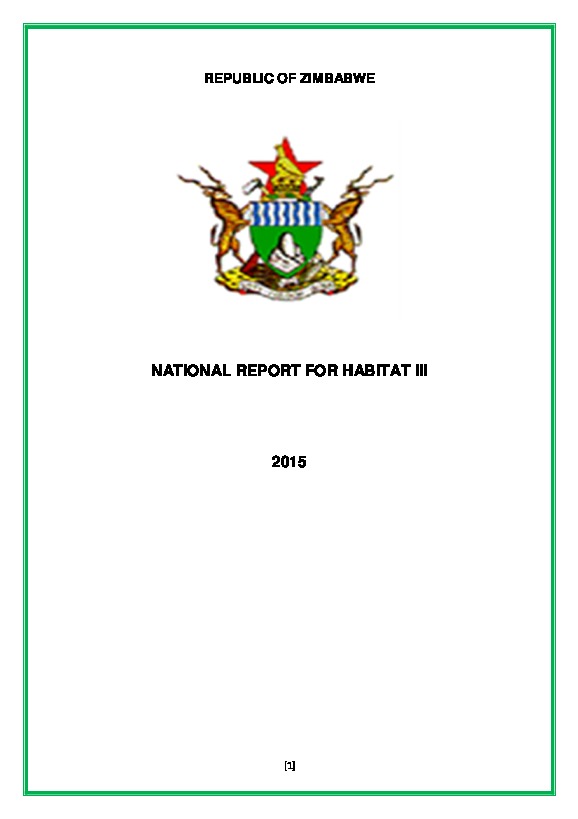 Globally it is estimated that 50% of the world population inhabit in urban areas and will increase to 60% (UN Habitat 2012). The 2012 National Population Census conducted by the Zimbabwe National Statistics Agency (ZimStat) indicates that, as of August 2012, Zimbabwe’s population was 12,973,808, with an average sex ratio of 93 males per every 100 females. According to ZimStat, the population constituted 3, 076,222 households, leading to an average of 4.2 persons per household. Given an area of 390,757 square kilometres, the country has a population density of 33 persons per square kilometre. Harare, as the capital and biggest city, has the highest population distribution of 16% of the total population, according to ZimStat. It has three satellite towns, that is, Chitungwiza, Ruwa and Epworth. These, together with Harare, constitute Harare Metropolitan Province. This Province also happens to have the highest population density of 2406 persons per square kilometre, followed by Bulawayo (the second largest city) with 1369 persons per square kilometre. Bulawayo’s population proportion of total population is 5.1%. Unlike Harare, Bulawayo does not have satellite towns, but is also a Metropolitan Province.

When urbanization is rapid, it does not allow government (both central and local) time to plan and provide for the needs of increasing urban populations. Consequently, local and central governments are caught ill-prepared for this phenomenon. They are failing to keep pace with the demand for public goods and services commensurate with urban development.

i. Lack of sufficient resources and capacity at the local level to implement development projects decentralised to the rural areas

ii. Absence of a holistic approach to planning for both rural and urban development

iii. Lack of inclusive urban policies and priorities at the national level.

The major challenge with rapid urbanisation manifests clearly in housing infrastructure and its ancillary services, unemployment and overcrowding. To that effect, Zimbabwe has a huge national housing backlog estimated at 1,25 million housing units countrywide. Due to limited financial capacity, at both central government and local government level, the country has witnessed a slump in housing delivery by the public sector. The private sector has tried to fill in the void left by the public sector, but the stumbling block has been lack of, or obsolete off-site infrastructure for water extraction, treatment and transmission, sewerage extraction, treatment and disposal. Such infrastructure requires huge capital outlay, which currently, the nation is failing to access due to the economic sanctions imposed on the country.

There has not been any meaningful foreign direct investment in housing development ever since the withdrawal of the World Bank (WB)/ International Monetary Fund (IMF) in the late 1990s. These financial institutions played a big role under the Urban 1 and Urban 11 projects where they capacitated local authorities to develop both off-site and on-site infrastructure and maintenance of same. As a result, the country has witnessed a low rate of housing delivery, inadequate water supply and obsolete distribution systems, poor liquid and solid waste management, pothole riddled and heavily congested road network across the country, particularly in the urban areas where the vehicle density is high, inadequate and poorly resourced health facilities, inadequate and poorly resourced educational facilities and low investment in social amenities.