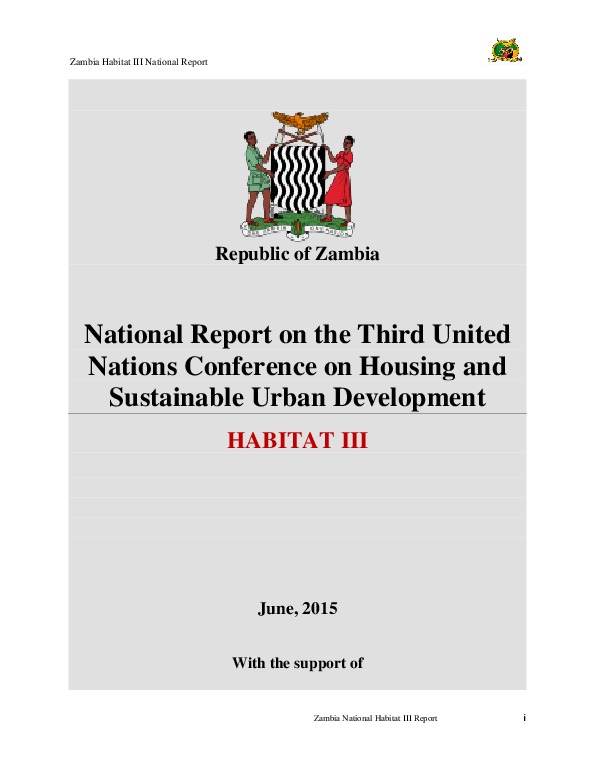 This report presents a review of the implementation of the Habitat II agenda in Zambia since 1996. It highlights the major achievements; challenges experienced and key lessons learnt and identifies future challenges and issues to be addressed by a New Urban Agenda. The specific objectives of the National Report are to: a) assess progress made in implementation of the Habitat Agenda, highlighting the key policies, legislation, and practical measures undertaken since 1996; b) assess achievements, challenges (gaps), and emerging issues and c) determine priority areas for action in the ‘New Urban Agenda’ and the Post 2015 Sustainable Development Goals (SDGs).The objectives of this Report are well-aligned to the GRZ’s Vision 2030, Revised Sixth National Development Plan (RSNDP) and other strategic framework documents. The Zambian Government has through the Vision 2030 endorsed the universal goals of ensuring adequate shelter for all and human settlements, safer, healthier and more livable cities, inspired by the Charter of the United Nations.

In Zambia the Habitat III National process took place between May 2014 and March 2015 at national and sub-national levels. A bottom-up and top-down approach was adopted to enable stakeholders, especially urban dwellers, and non-state actors, individually and collectively, to engage constructively with city and local authorities, government and United Nations agencies to determine the priority issues that affected their lives and that would be considered in the ‘New Urban Agenda’.

The Government of the Republic of Zambia (GRZ) through the Ministry of Local Government and Housing re-invigorated and entrusted the National Habitat Committee (NHC) with overall responsibility of the Habitat III preparatory process and mobilisation of key stakeholders, who were drawn from Local Authorities, NGOs and CBOs, Trade Unions, Professionals and Researchers, Academia, Human Solidarity Groups, ordinary citizens, Parliamentarians, Private Sector, Foundations, Financial Institutions, Youth and Women’s Groups.

Information collected from public and private sector consultations was augmented by in depth interviews with key urban experts and a desk review that included recent experiences of cities and their partnerships (e.g. city to city partnerships, private sector participation and engagement of different grassroots federations with potential to create greener, more resilient and more livable cities). Direct observations of urban conditions were made while the NHC and urban experts provided the necessary inputs and feedback to the Report. The National Report outlines progress made since Habitat II (1996), key priority issues addressed and solutions for driving positive change and an Action Plan.