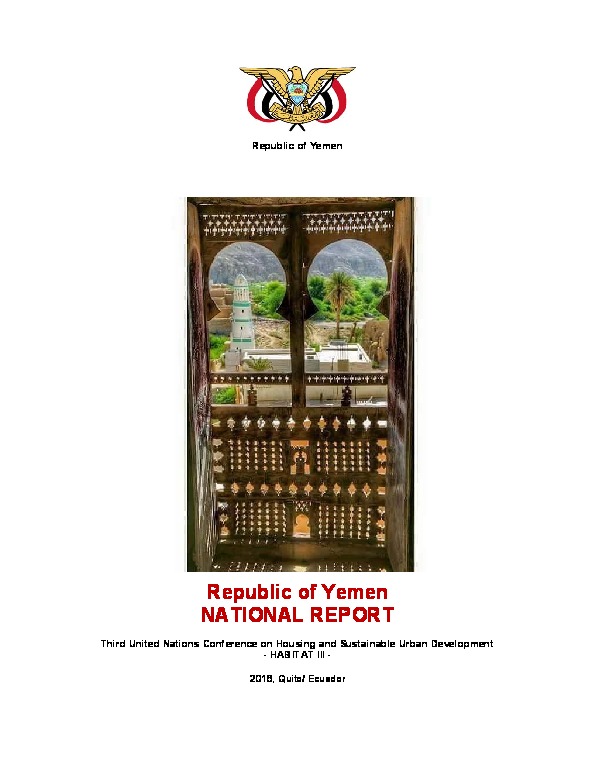 Yemen’s demography is characterized by a high population growth rate, reaching up to 3 % per annum. Indeed, it is one of the highest rates worldwide. According to the 2004 Population, Housing and Establishment Census, the total resident population counted 19,685,161 inhabitants. In 2010, this figure increased to 23,154,000 inhabitants. The population projections for the period 2005-2025 estimate that Yemen population will reach 34 million inhabitants.

In 2010, More than 70% of Yemen population lived in rural areas (in more than 130 thousand rural villages and localities) and around 29% are urban dwellers (living in 3,642 urban centers). Though predominantly rural, Yemen is experiencing rapid urbanization fueled by high population growth and rapid rural to-urban migration. Population projections show that the percentage of people living in urban areas will increase to reach 56.5% in 2050. Urban dwellers are primarily settled in key urban agglomerations like Aden, Al-Hodeidah, Al Mukalla, Ibb, Sana’a and Taiz. Being the main agricultural regions of the country, together the urban areas of Sana’a, Ibb, Taiz and Al-Hodeidah encompass the largest proportion of Yemen’s population.

According to the 2004 Census, one of the main characteristics of Yemen’s population is the unbalanced geographical distribution. 43% of the country’s population is located in four out of the 21 governorates (including the Capital Secretariat, Sana’a). Taiz Governorate encompasses the largest number of population (12% of the total resident population), followed by Al-Hodeidah (11%), Ibb (11%) and the Capital Secretariat of Sana’a (9%). Other smaller governorates such as Al-Maharah, Marib and Raymah are almost depopulated, as they comprise respectively 0.5%, 1% and 2% of Yemen total population.

The two most densely populated regions are the two urban agglomerations of Aden and the Capital Sana’a, reaching 1,655 inhabitant/km2 and 714 inhabitant/ km2. Being a central political and socio-economic pole, the capital Sana’a has seen, during the past two decades, a remarkable increase in its urban population. Recent figures show that while in 1995 the percentage of urban population in Sana’a urban agglomeration was 28,9%, it increased in 2015 in order to reach 33,5%. Forecasts show that the growth rate of Sana’a’s population should remain very high in the future (about 4% annually). The other main urban agglomerations did not follow this same trend.

Rapid population growth is considered one of the major challenges to development in Yemen, which is adding more strain on the scarce natural resources, especially water, and the already weak socio-economic set-up. In order to address these challenges, the Government of Yemen (GoY) has initiated a number of national strategies and plans, such as the National Population Policy, the National Reproductive Health Strategy (2011-2015), the Fourth Five-Year Socio- Economic Development Plan for Poverty Reduction (2011-2015) and Rural Development Strategy (2005).

Rural-urban disparities in development investments have further contributed to the impoverishment of the already poor rural people. More than half of the population that is living in rural areas is faced with complete deprivation. Poverty is manifested through declined socio- economic situation, high unemployment, low education attainment, poor infrastructure as well as scarcity of water resources.