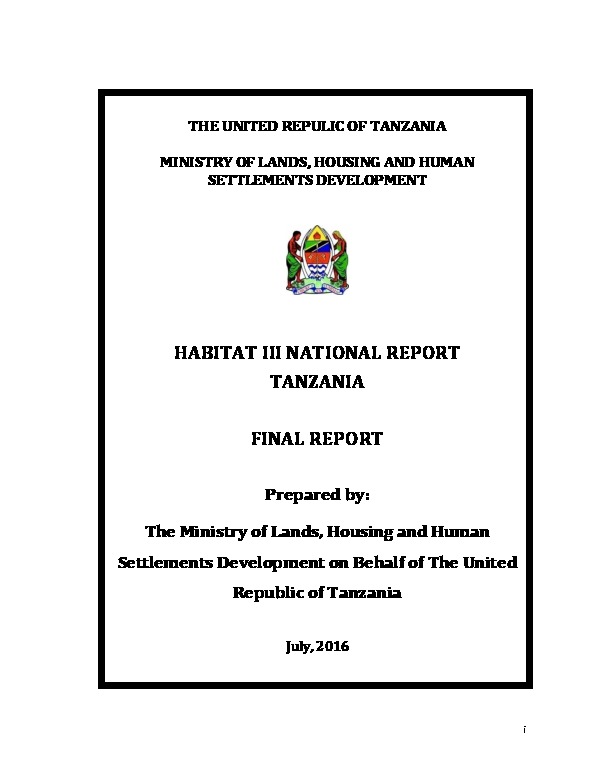 Urbanisation in Tanzania is relatively low at 29.1% in 2012, up from 5.7% in 1967. The growth rate is about 5.2% per annum (URT 2006). Urban population is growing rapidly, and Tanzania cities are among the highly populated cities in Africa (URT 2013). Tanzania’s urban population is expected to reach 50% of the total national by 2030. This growth, which is largely fuelled by high rates of rural-urban migration, occurs in the form of densification of the major cities, lateral expansion of informal settlements and growth of rural trading centres. A survey conducted in 2015 reveals that 61.4% of the urban dwellers migrated from rural areas against 38.6% who have borne in urban areas.

Tanzania adopted the Urban Environmental Management Planning approach, implemented the Sustainable Cities and Urban Safety Programmes, which had a great impact on urban planning and management in the country. The government introduced a new Human Settlements Development Policy in 2000 and enacted a new Urban Planning Act in 2007 that advocates compact development. In collaboration with urban authorities and other stakeholders, the government has implemented several urban infrastructure and settlement upgrading projects aimed at improving urban transportation, access to water and sanitation services, particularly in the informal settlements, which accommodate about 62.5% of Tanzania’s urban population. A new urban management policy that will streamline roles of LGAs in managing sustainable urban development is under preparation and the government is also decongesting land management and urban planning responsibilities from the Ministry of Lands, Housing and Human Settlements Development by establishing eight zonal offices to deal with urban planning and approval processes.