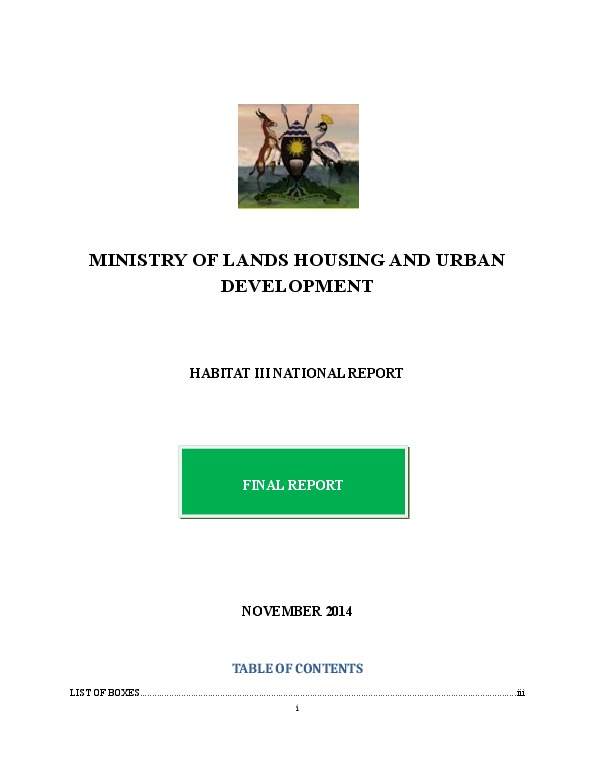 With guidance from the National Habitat Committee, several Commitments of the Habitat II Agenda have been adopted as Policy Instruments to guide relevant Ministries, Departments, and Agencies in the provision of adequate shelter to all and also institute sustainable human settlements. Notable Instruments include Ministerial Policy Statements; Cabinet Papers; Budget Framework Papers; Tax Polices; the National Development Programmes; and NRM Manifesto, among others.

To date, the current institutional framework governing the housing sector recognizes, in general, the vital role of housing in the development of a harmonious society and, the right for each individual and/or family to have a safe and adequate house. However, the country is still faced with a housing backlog of 1.6 million units. 13 percent (211,000 housing units) of the backlog is in urban areas, while the balance (1,395,000 units) is in rural areas.

There is a better understanding of the process of urban governance; however, governance issues vary greatly, particularly at local government level, because local governments have low technical and financial capacity. Nonetheless, Non Government Organizations and Civil Society Organizations like the Uganda Human Settlements Network, Actogether and Foundation for Rural Housing, among others, have actively advocated for adequate implementation of urban governance-related legislation. The Non Government Organizations and Civil Society Organizations have also used the Habitat Agenda Commitments to promote greater Habitat Agenda sensitivity among communities.

Various laws and policies have contributed to a general and visible change in the role of women in the country. Further, there are several Non Government Organizations and Civil Society Organizations that have empowered women at community level to actively participate in urban development.

Policies and strategies have been adopted in the fields of environmental protection, and in the use of natural resources; particularly water which is increasingly becoming a rare commodity. However, the weak enforcement of the policies and strategies remains a major concern. Over 98 percent of the population depends on biomass, in the form of firewood and/or charcoal to meet their energy needs, and air pollution is still a challenge because of the poor transport consumption habits of the population.

Summary of Lessons Learnt in implementing the Habitat II Agenda

- Single sprawling developments are neither an efficient use of land, which is a scarce resource, nor cost-effective because it makes the underlying infrastructure much more costly. The sprawl resulting from low density developments—essentially, large plots and low-rise structures—has imposed further demands on infrastructure for transportation, water, sewerage, and electricity.

- The capacity of the country, in terms of decentralised service provision, has been a key challenge in adequately implementing the commitments of the Habitat II Agenda. For local governments to effectively deliver their mandates, the level and nature of funding from the centre needs to be increased.

- In Uganda private real estate developers find it more profitable to focus on the high end of the housing market, because of the high cost of land and infrastructure. To-date, minimal efforts have been embarked upon to design and build modestly priced houses for low income earners.

- No country can attain its social and economic development without the active participation of the youth. In order to harness their potential, the Government, with support from Development Partners must make the right investments in their education and learning and also provide them with relevant skills, such that they get employed and/or create their own jobs. In addition, the Government should avail opportunities for apprenticeship and mentoring and ensure that the youth have equal access to reproductive health services in a safe environment.

- A strengthened role for Non Government Organizations and Civil Society Organizations is essential if the Commitments of the Habitat Agenda are to be implemented adequately.

- Uganda lacks regulation on the importation, purchase and use of second hand vehicles. Second hand vehicles consume leaded fuel that is not clean for the environment. This contributes to air pollution, among others.

The Government of Uganda commits to implement the following initiatives under the New Habitat Agenda;

- The development of vertical houses (flats) will be promoted to optimize land use and reduce infrastructure costs that are typically associated with horizontal housing developments.

- A Social Housing Programme will be designed, and sufficient resources will be mobilized to implement the programme.

- Given the important role Housing Cooperatives play in improving housing and/or human settlements in the country, the Government will work with the Uganda Cooperative Alliance to develop a nationwide programme on how to promote and regulate the Housing Communities.

- A Mortgage Liquidity Facility (MLF) will be set up. The MLF will be charged with developing the primary mortgage market by providing funds to mortgage lenders at better rates and longer tenors, thus facilitating affordability of housing finance, particularly among the lower middle and low income earners.

- Intelligent transportation systems will put in place across the country. A notable example is telecommuting, which reduces unnecessary travel, traffic jam, and pollution. This in turn contributes to efficiency and productivity in urban development.

- A comprehensive nationwide vulnerability analysis will be conducted in disaster-prone areas, to gather information about past disaster events, the socio-economic conditions of the population living in the affected area, and inventories of major structures liable to damage. This will help determine the frequency, intensity, impact, return period and other data in relation to each category of disaster/hazard.