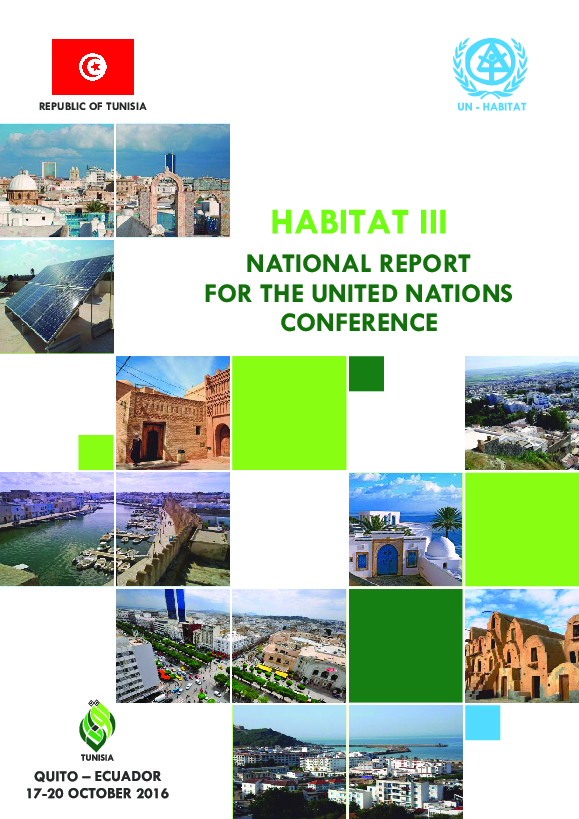 The Tunisian society has undergone significant changes in the population pyramid structure over the past two decades. is was marked by the expansion of youth and elderly people base and the great change of lifestyle characterized by an increasing demand for basic services and life-quality attributes. These societal shifts have been synchronized with the urban area enormous development by the expansion of cities and the emergence of major challenges such as the difficulty in providing urban services of all kinds and ensuring a decent living for all people, notably low income groups. In light of this urban challenge, Tunisian cities, that represent the main source for enhancing GDP national crude, are now required to enhance the developmental movement in cities and rural areas at the same level in order to create job opportunities, reduce unemployment and provide adequate income for most social groups. is would improve the social conditions for people so the cities become a source of development and sustainable urbanization.

This report outlines the features of the urban agenda that is capable of meeting these challenges in the next twenty years (2016 - 2036) based on a detailed assessment of the achievements and results achieved since 1996 in the field of housing and sustainable urban development, with reference to the development plan guideline (2016 - 2020) adopted by the Tunisian government in September 2015. is has enabled the expanded national commission, that was established to create the National Housing report III, to open and discuss all the axes suggested by the United Nations (7 axes) and has come to the following results and concrete suggestions:

Challenges: rapid urbanization, ageing population, demographic and economic disruption of linkages between urban and rural areas, lack of integration of youth and women in the developmental work which contributes to the increase of unemployment rates as a result of a slow development dynamism,

Suggestions: supporting rural-urban linkages in order to help developing the local economy and improve the population living conditions; activating the economic movement in cities; improving cities attractiveness; encouraging investment and partnership with the private sector; supporting decentralization and ensuring wider contribution of civil society in the preparation of development projects and monitor their implementation; enhancing youth and women’s integration in the development process and raising the spirit of initiative in them in order to integrate them in labor market and adapting the urban environment so that elderly people continue to contribute in public life.

Challenges: lack of spatial planning tools, inability of municipalities and local authorities to manage the issues of urbanization, inefficient urban plans development due to non-compliance with their guidelines, unavailability of land reserves that could to meet the demand of plots meant to be built for low income people and some sensible economic activities and the continuing expansion of informal urbanisation,

Suggestions: enshrine the principles of a forward sustainable planning and finding a planning dynamism and a responsible yet democratic urban development in order to enhance the competitiveness and Tunisian cities attractiveness to improve the performance of local and public authorities and civil society organizations in line with the urban, social and economic frame; creating integrated economic poles through providing plots for housing surrounded by green areas near the industrial and tourist zones which help limiting the expansion of information reconstruction and movement to and from work sites; wise management of resources and lands by following a participatory process to stop the informal urban migration; redistributing local management powers by abolishing the tutelage on local authorities and enshrining the free administration principle and adapting these powers with resources to ensure the interventions effectiveness; developing concrete mechanisms for financing urban development to enable local and regional authorities to control the real estate, roads and planned public equipments and implementing principal networks in the expanded conurbations; implementing “agencies for development and urbanization» in large urban centers to be responsible for the observation of urban development and coordination between the of economic, social and urban development strategies.

Challenges: disparate lack of the necessary environmental services for the quality of life (sanitation and waste disposal, green areas, ...) and decline of agricultural land due to urban expansion and cities inflation, continuous risks of pollution, notably the risk of chemical and organic pollution and their negative impacts on people who live in cities and the urban environment; failure of preventing equipment and tools against the negative impacts of natural hazards and climate change; deal with traffic congestion.

Suggestions: ensuring the evacuation and treatment of wastewater; maintaining sanitation stations and collecting and managing household waste collection by the adoption of clean techniques that take into account the environment and the health of citizens; wise management of liquid and solid waste, sources of pollution, noise and different environmental disturbances according to the situation of each city. In addition, an early warning system and adequate rapid response plans should be implemented in each town to face the intense atmospheric pollution; creating identification and definition maps of threatened areas by natural disasters (such as earthquakes, floods, etc.) and areas affected by climate change, and disseminate the culture of positive interaction with these disasters. An early warning system must be implemented in the field of climate change to enhance the preventive measures. Establishing a participatory system that is responsible for the maintenance and rehabilitation of green areas and urban parks and protecting natural areas, notably those characterized by a fragile ecological system due to the negative impacts of human settlements and urban expansion. Moreover, the national sustainable development strategy for the period 2014-2020 is going to be activated to guarantee more balance among the social, cultural, economic and ecological dimensions and achieving a fair and integrated territorial development.

Suggestions: developing the urban and territorial laws in light of the new constitutional principles including those enshrining decentralization, sustainable development and the right to an adequate housing; supporting the legal and institutional framework relative to fighting against urban phenomena that spoil the beauty of the cities; simplifying facilities and administrative procedures and delays of preparing and reviewing the development plans; reviewing property law system to solve the problem of frozen fees in order to reintegrate a great part of the land reserves within the economic cycle, controlling the land and fighting against the monopoly and speculation phenomena; activating the constitutional provisions relative to decentralization and reformation of legal system in the fields of territorial division of the Tunisian country; establishing a legal framework for local authorities and managing the local a air and financial system of local authorities; establishing a legislative basis to apply the participatory governance and develop partnerships and cooperation between local authorities; enhancing the adoption of gender approach and enhancing the participation of women in economic and social planning and public a airs.

Challenges: weak developmental dynamism in urban areas and the decline of economic growth in line with the development of economic activities and the contribution of cities in the production of gross domestic product; increase of unemployment pace notably among youth, improving productivity and economic ties between the neighboring cities and rural areas to reduce the imbalance and poverty; developing financing resources of local public groups’ budgets and establishing a local taxation system that meets the requirements of establishing the ‘’city policy’’ and incarnating decentralization; generalizing the participatory local development paths varying the types and mechanisms of housing finance and dwellers acquisition mechanisms and rehabilitating the existing dwellings.

Suggestions: updating the local taxation system to help preserving the financial balance of local authorities; yearning to establish local and regional financing mechanisms (funds or cooperative credit institutions) to help local communities enhancing their financial resources and revitalize their economies; reforming the funds of promotion of housing for the employees system and create a fund to support housing for low income group; creating long-term financing mechanisms to create land reserves; facilitating loans’ granting for the improvement of existing dwellings and adapt the mechanisms of loans’ granting according to the beneficiary situation and repayment capacity; master the active mechanisms to enhance employability; improving professional capacities of human resources and continue to support the strategic handicraft sectors with high employability capacity; enhancing the role of collective and solidarity economy; integrating the parallel economy and fragile employment within the structured business cycle; enhancing supportive procedures of production institutions that are responsible for improving their competitive capabilities and ensuring their viability.

Challenges: an increase of informal neighborhoods’ rate as a result of a decline of social plots supply for low- income groups; lack of urban rehabilitation system within housing and urban policies; lack of efficiency concerning access mechanisms to adequate housing notably for low-income and medium social groups; difficulty in providing urban services including health and security services with the required quality, especially for needy families.

Suggestions: setting a new policy for the city responsible for controlling urban land prices to respond to the needs of low-income social groups of rehabilitated plots; controlling dwellers prices and developing construction methods; activating the partnership between the private and public sectors and implementing integrated urban and housing projects in which reasons and decent living conditions are available; ensuring good quality in basic urban and leisure services (lighting, energy, drinking water, sanitation, waste management and fighting pollution, green areas, ...) developing health control system of food and drinking water; mobilizing the non-traditional water resources by the adoption of sea water desalination for the great urban poles by coastlines and desalination of groundwater in the South and the Center; activating preventive policies to ensure safety and health security to urban and rural population; promoting the culture of energy conservation by encouraging the use of renewable energy and the adoption of green building techniques that save energy.

2. Supporting the protection and enhancement of cultural and natural heritage and the maintenance of old towns and city centers from the risk of neglect and deterioration,

4. Improving use of resources and wise management of lands and promoting the production of social plots that would reduce the informal expansion of cities,

5. Reducing the level of pollution and the negative impacts of economic and social activities on the environment,

7. Encouraging local and regional actors to develop positive social, environmental and economic relations among the urban, semi-urban and rural areas by adopting harmonious yet coherent urban and territorial plans development set for this purpose,

8. Empowering sustainable urbanization pathways and increasing the capacity of local authorities in terms of urban planning and management in order to establish cities and conurbations in which a decent living conditions are provided for all,

9. Improving urban transport services and enabling all the population to use safe, clean and sustainable means of transport,

10. Mitigating risks and natural disasters that increased during the last period taking into account climate changes.