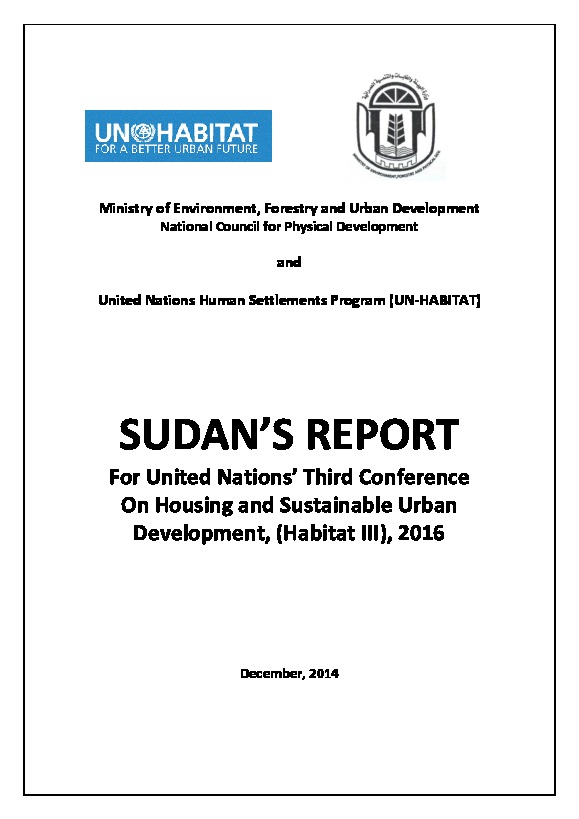 The population of Sudan reached 30.9 million people in the last population census (2008), and is projected to reach 39.7 people by 2016, growing at a 2.8% growth rate per annum. With this rate of increase the population could double up in in about 16 years.

The urban population constituted about 29.8% of the total 2008 population, which indicates that Sudan is predominantly rural. This high rate of population increase, and the tendency towards population concentration in large urban centers, constitutes one of the biggest challenges facing Sudan because it requires heavy investments in infrastructure, housing and social services in urban areas that are beyond the ability of public authorities, and popular initiatives, to satisfy. This inability affects relatively the quality of life in urban and rural areas.

Children and adolescents below 18 years of age constitute 48.5% of Sedan's population. This necessitates provision of a range of essential services for this group, which constitutes a strong asset for Sudan if it is well catered for. On the other hand, youth in the 15-35 years age range constitute about 35% of Sudan's population. They are also a strange asset for Sudan's future provided that their economic and socio-cultural needs are satisfied. The central government and state governments have launched youth and graduates employment programs, and provided funds for youth micro-enterprises.

The Sudanese Urban Dwellers Survey we conducted in September and October 2014 revealed that the priorities they would like to see in their cities come in the following order of importance (Annex 3):(1) better housing and good living environments, (2) good education; (3) better health care; (4) affordable and nutritious food; (5) access to adequate and safe water and sanitation; (6) honest government and local authority; (7) better streets, public transport and mobility; and (8) better job opportunities. In addition to those, urban dwellers in Greater Khartoum, the national capital, identified a well-planned city and town and access to land and security of tenure among their top priorities.

Sudan has taken great strides towards achieving the Habitat Agenda (that resulted from Istanbul 1996 international conference) goal of reducing the number of urban dwellers living in slums substantially. In Greater Khartoum, for example, their percentage dropped from about 60% in 1990 to less than 20% in 2014. A similar drop happened in other Sudanese towns. Similarly, Sudan has made great progress in achieving the second goal of the Agenda by increasing the number of urban dwellers with sustainable access to a source of safe drinking water. According to the 2008 population census, they constituted 55% and 82% of the populations of Sudan and Khartoum State, respectively. A similar progress in the third goal of increasing the number of urban dwellers with access to proper sanitation and toilet facilities has been achieved. According to the 2008 population census, the percentage of households with access to proper means of sanitation. They constituted 54.3% and 90.6% of Sudan and Khartoum State households, respectively.

As for as provision of adequate housing is concerned, hundreds of thousands of housing plots have been allocated to urban dwellers in several Sudanese towns. This has increased the percentage of households who own their houses from 76% of the total 1996 households to about 87% in 2008 (Annex 1). This does not necessarily mean that all those households have adequate housing. It may mean owning just a plot of land or a humble house. Access to adequate housing constitutes a big challenge to individuals, households and government agencies, and it figured as the top priority in the Urban Dwellers‟ Survey.

Absence of housing finance is one of the biggest obstacles that hamper provision of adequate housing for Sudanese households. Consequently, a high percentage of them resort to sending some of their members to work in one of the rich countries and use their remittances in home construction. In 2008, the National Fund for Housing and Reconstruction was established to build housing units on behalf of needy households against easy installments. However, lack of adequate funding is the biggest hurdle that faces the Fund.

Sudan has also made good progress in linking urban and rural areas together by building national and local highways and domestic airports. Similarly, good progress has been made in sustainable urban planning. Many state capitals have prepared long-term master/structure plans. However, lack of sufficient budgets and trained cadres impedes full implementation of those plans.

Many Sudanese towns face the dangers of natural disasters – namely, droughts, desertification and floods. As a result of climate change, desertification is the major obstacle that hampers sustainable development and urbanization in Sudan because it leads to failure of rain-fed crops and drying-up of pastures upon which millions of rural households depend. This has forced millions of people to migrate from rural areas to the fringes of towns and cities where they live as squatters. Sudanese urban areas require substantial resources in order to consolidate their coping mechanisms to address the ramifications of climate and its concomitant natural disasters.

On the other hand, civil strives and armed struggles that proliferate in some states in Sudan constitute a big challenge through the destruction of infrastructure, services and livelihood means, and the human displacement resulting from that. Sudan has made good progress in resolving those conflicts and grievances that bread instability through negotiations and peaceful resolution of those conflicts; however, it appeals to the international and regional communities to assist in funding the resulting reconstruction and development.

Lastly, the above-mentioned strides and achievements are often impeded with sanctions and embargoes imposed on Sudan by the international community since 1994. Those sanctions prohibit importation of new equipment and technologies for water purification, sanitation, clean and sustainable energy sources – such as solar and wind powers – transportation means, safety and security means. Unless those sanctions and embargoes are lifted, the suffering of Sudanese urban dwellers – especially the urban poor – will continue unabated.