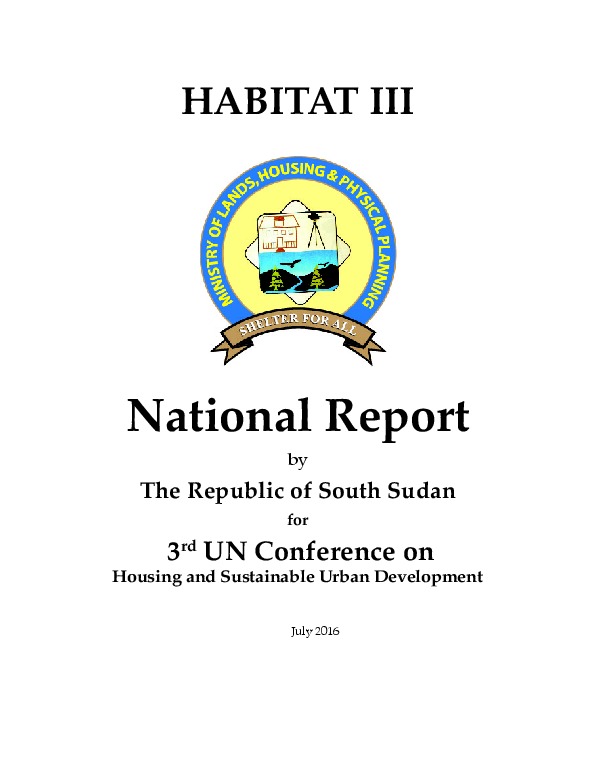 The preparation of the Habitat III National Report focused on the following thematic areas; demographic issues, national urban policies, urban planning and design, housing, land and security of tenure, urban economy and employment, disasters and resilience, environment and climate change and any other key issues deemed important within the national context.

In South Sudan, a need to embark on this assignment became even imperative considering the emerging needs for housing and basic services. The independence of South Sudan in 2011 created a new hope for prioritizing, identifying and aligning our national agenda to the global Agenda. Habitat III national report could not have come in a better time than now.

Based on the requirement and specification of compiling a refined report for the country, a series of consultative meetings and seminars were organized locally and country-wide level respectively. Prior sensitization meeting were designed and arranged and prepared along the following thematic areas: Population and Demography, Urban Planning and Design; Urban Economy; Housing and Basic Services; Social Development; Environment Management and Urbanization; Transport and Mobility; and Urban Governance.

Summary of Activities Undertaken: In addition to the meeting that was held between the Directorate of Housing and the National Habitat Committee, both the Secretariat and the Consultant embarked on a review of literature to the scope of the assignments exercise. Below are documents the group has gathered and reviewed;

- Reports on the State of the Economy

- Laws and Regulations (Draft concept paper on Physical Planning Policy 2014; Public Health  Act, and among others)

This Report constitutes the final deliverable of this assignment. From the onset, the Consultant wishes to state that what was presented in the inception and interim reports remains valid and, therefore, need not be further elaborated upon. The contents of this Report are, largely intended to establish consensus and to consolidate mutual endorsement of the Terms of Reference (TOR) between the Employer (MLHPP) and the Consultant to achieve a common objective of producing a harmonized National Habitat III Country Report.  The final report articulates the outcome of the various consultations, which took place during the months of August and November 2014, and taking note of inputs, observations, findings and recommendations.