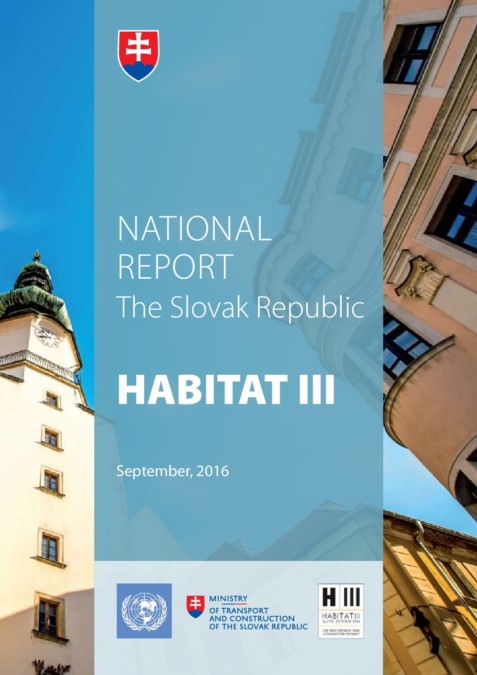 The Slovak Republic uses this occasion to make a contribution to the conference Habitat III, during which it will hold the presidency of the Council of EU, as well as to evaluate the development of Slovak cities since the previous world conference Habitat II held in Istanbul in 1996. The report also offers the opportunity to describe the role played by Slovak cities in the overall socioeconomic development of the country. Slovakia is a small country and it may seem to have nothing to contribute to the worldwide discussion on urban agenda. However, there are many reasons why the position of Slovak cities should be compared with other countries of the world. Perhaps the most important reason is that cities, no matter what country they are in or however small, are and will always be drivers of the economy and social development. They represent territories with the highest concentration of activities, both positive (economy, innovation, financial and human capital) and negative (pollution, crime, transport problems, individualism and pathogenic social phenomena). Answering the global questions asked during the preparation of the conference Habitat III allows us not only to understand the position of our cities in a broader international context, but also to examine how globally adopted postulates and solutions are adaptable and applicable to our internal policies and procedures. Moreover, Slovakia has much to offer to the world, because over the last 20 years it has undergone an extremely fast political and economic transformation and knows its impact very well. The development of the settlement of the Slovak Republic with regard to the urban development in the last decades cannot be described in individual chapters separately, because most processes of political, demographic, social and economic development and their effects on the environment and quality of life of population are closely related to each other. For example, the effects of the reform of public administration are referred to in several chapters. This has been running continuously since the change of the political regime in the country in 1989, but it achieved the highest scope and had decisive importance for the strengthening of the self-government of the society and thus for urban management and governance in the period of 2002 - 2005. Although the whole national report should be preferably devoted to the cities, in several chapters, it was impossible to objectively describe the specific situation of the cities due to the lack of relevant statistical information. This limitation results from the fact that censuses with a ten-year periodicity have not resulted into datasets with rural-urban classification. Sample statistical surveys are implemented on a nationwide sample. Consequently, the report refers to general empiric observations, where necessary. The content of the report fulfils the requirement of UNHabitat, though some subchapters are regrouped to other chapters, where their interconnection is more obvious in the conditions of Slovakia. The Slovak Republic spreads over an area of 49,035 km². It borders with the Czech Republic, Austria, Hungary, Ukraine and Poland. Its population is approximately 5.41 million and its biggest and capital city is Bratislava with a population of 423,0001. Besides the capital city, 7 regional cities with a population of 56,000 to 240,000 fulfil the function of administrative centres of regional self-government. The Slovak Republic is a parliamentary democracy. The national language is Slovak. Following an integration process which took many years accompanied by numerous economic and political changes, the Slovak Republic became an EU Member State in 2004 and a member of NATO in 2004. It has been part of the Schengen Area since 2007 and of the eurozone since 2009.

We thank Slovakia for their generous contribution to the Habitat III Trust Fund and for acting as a member of the Bureau of the Preparatory Process.