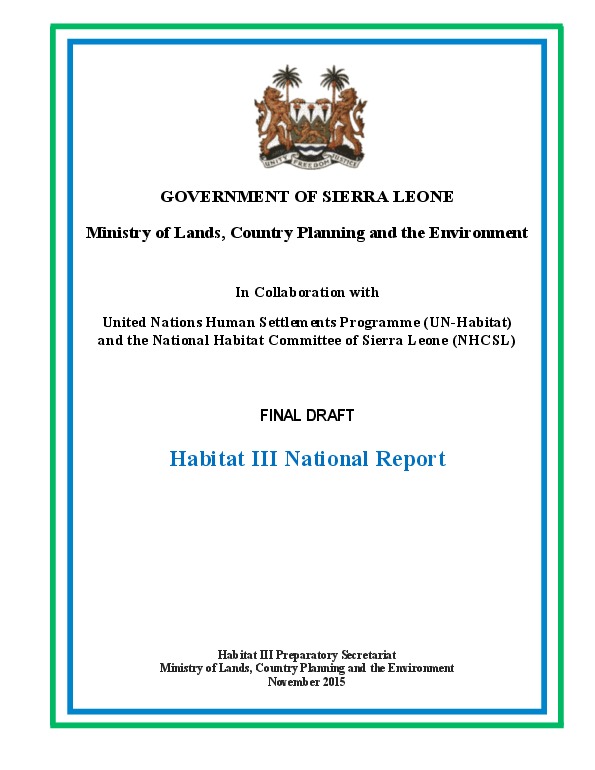 The National Habitat III reporting process was conducted during a national public health emergency, which was enforced to prevent the spread of the Ebola virus disease (EVD). The government of Sierra Leone affirms its commitment to comply with prescribe standards for assessing its performance in implementation of the Habitat Agenda adopted in 1996, its two main goals of “Adequate Shelter for All” and “Sustainable Human Settlements in an Urbanizing World” and to implement the Plan of Action based on these goals. The reporting process was conducted by the National Habitat Committee in collaboration with the Ministry of Lands, Country Planning and the Environment. Reporting guidelines provided by UN-Habitat ensured effective participation of broad based stakeholders to assess progress made in implementation of the Habitat Agenda, highlighting policies, legislation, practical measures undertaken, challenges and lesson learned and further identify emerging issues and priority areas for action in the following thematic areas that will set the path for a New Urban Agenda.

Some the data and information in this report were based on the 2004 Census and the projections based on that census. It is also important to note that Sierra Leone will be conducting a Population and Housing Census in December 2015, and the outcome of this census may affect the findings and conclusions in this report.