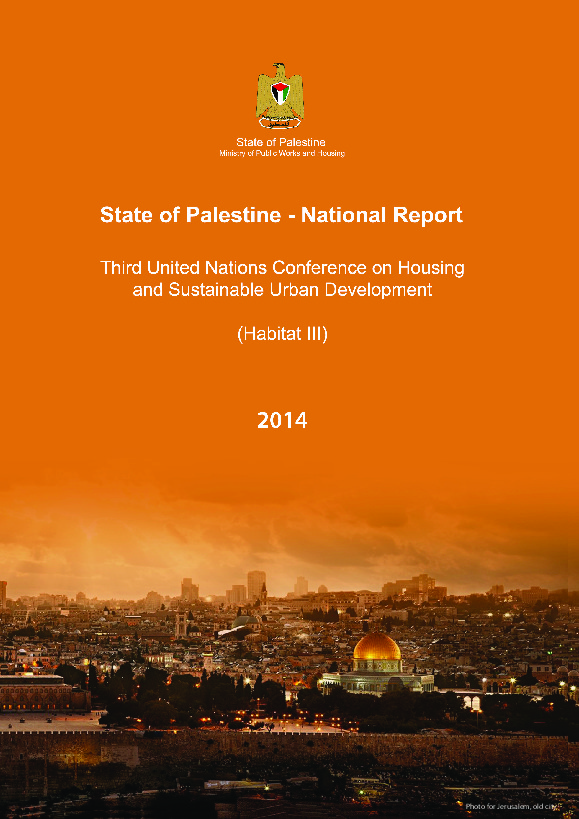 The Occupied State of Palestine (“Palestine”), as it stands today, consists of two physically separated land masses, namely the West Bank and Gaza Strip, with a total area of 5,661 km2 and 362 km2, respectively. The West Bank is surrounded by Israel to the west, north, south; and the Jordan River to the east. It is divided into eleven governorates: Jenin, Tubas, Tulkarm, Nablus, Qalqiliya, Sal t, Ramallah and Al-Bireh, Jericho, Jerusalem (East Jerusalem), Bethlehem, and Hebron. The Gaza Strip is a coastal zone at the eastern extreme of the Mediterranean Sea on the edge of the Sinai Desert. It is surrounded by Israel to the east and north, Egypt to the south and the Mediterranean to the west. It is composed of five governorates: North Gaza, Gaza, Deir al Balah, Khan Yunis, and Rafah. Palestine has made great strides, particularly over the last five years, to develop the framework for a viable, independent, sovereign state in the West Bank, Gaza Strip, and East Jerusalem1. This process was bolstered by the recognition of Palestine as an observer non-member state by the UN General Assembly in November 2012. Well before its recognition as a state by the UN, the Oslo Accords of 1994-1995 2 created the Palestinian National Authority (PNA) and transferred some power and authority to the new Palestinian government. Since then, the PNA has pursued multiple avenues in the international arena to participate in international bodies and conferences and support the development and well-being of its citizens. Of particular importance to mention, the PNA participation in the United Nations Conferences on Human Settlements, Habitat I and Habitat II and submission of a national report for each conference as an observer organization. For Habitat III, Palestine will submit its first national report as an observer state.

The PNA has developed and pursued policies regarding nearly every aspect of the UN Habitat Agenda. Among various related programs and initiatives, the PNA began working with UN-Habitat on a number of housing and urban development programs since 2003. However, it must be noted that implementation of nearly all of the strategies and policies developed has been drastically curtailed by the continuation of the Israeli occupation. This is further exacerbated by internal challenges to the Palestinian governmental entities, but the primary source of restriction on development, political, social, and economic has been the lack of control over the means of implementation by the Palestinian National Authority because of Israeli occupation.

The Israeli occupation impacts not only Palestinian daily life but also the ability of the PNA to develop and implement long-term plans and strategies to address the goals of “adequate shelter for all” and “sustain- able human settlements in an Urbanizing World” as articulated in the Habitat II Agenda. These impacts can be grouped into four general categories: 1) physical restrictions and impediments to Palestinian growth, including the construction of illegal Israeli settlements and the Apartheid, Separation and Annexation Wall in the West Bank and East Jerusalem and their related roadblocks and checkpoints, and the total blockade of the Gaza Strip ports and borders; 2) Lack of control over area C 3) legal and administrative-level restrictions, including the construction permit regime in East Jerusalem and Area C, and the restrictions on tax collection on Palestinian imports; and 4) intentional destruction of existing infrastructure, including the policy of home demolitions in East Jerusalem and the West Bank and the devastating military attacks on the Gaza Strip which have destroyed both housing and civilian infrastructure. Thus, while the National Report for UN-Habitat III of Palestine addresses the indicators common to all countries in a rapidly urbanizing world, it also includes a variety of other factors and challenges addressed that are unique to the experience of an occupied state that still does not have sovereignty.

Between 1967 and 1994, Palestine was under direct Israeli military administrative control. Civil services were provided on the municipal level by Palestinian municipal councils, committees made up of family clan representatives, and/or popular committees. However, development and planning, including economic development, infrastructure and environmental protection, on a regional or national level was entirely controlled by the Israeli Occupation. This led to significant neglect and underdevelopment in many areas, which the current PNA is continuing to have to compensate for in addition to addressing new challenges.

After Oslo, a new complex legal and planning scheme was created -one for the West Bank and another for the Gaza Strip-while leaving the issue of authority over East Jerusalem for future negotiations, effectively leaving it under de facto Israeli authority through its illegal annexation in 1967. The Gaza Strip, with a small number of Israeli settlements and military bases, was physically cut o from the West Bank, but was largely under Palestinian administrative and planning control, The Oslo Accords included a provision requiring a safe passage route from Gaza to the West Bank to enable free movement between the two, but Israel never allowed it to be implemented. In 2005 the settlements and military bases were evacuated, but Israel maintained a “buffer zone” around the edges of the Gaza Strip which had increased in size to 62.6 km2 prior to the assault on Gaza which began in July, 2014. That included 36% of Gaza’s cultivatable land and 85% of its maritime area. In 2007, Israel unilaterally and illegally implemented a siege on Gaza, restricting imports and exports and the use of Gaza’s maritime area. The “access-restricted area” has dramatically increased in recent months to over 43% of the Gaza Strip being declared “access-restricted” by the Israeli military during the current Israeli assault. Thus while the PNA has theoretically had total civil authority over the Gaza Strip since 2005 it has no effective control over its borders, economic development, and infrastructural development. This is never more pronounced then when Israel mounts a military offensive against the Gaza Strip, as it has done three times in the last six years, destroying billions of dollars’ worth of housing settlements and infrastructure.

The West Bank, under the Oslo Accords, was divided in 3 zones: Area A, B, and C.4 Area A, which is made up of the Palestinian city centers (excluding Hebron) is under Palestinian civil and security control. Area B, which is made up of the Palestinian built-up areas outside Area A, is under Palestinian civilian control and joint Israeli and Palestinian security control, though Israel has exclusive right to enter Areas B to conduct “security operations” as it wished. Area C, which makes up 61% of the West Bank, is under Israeli civil and security control. These area assignments were meant to be temporary, with land being phased into total Palestinian control by the end of the five-year interim period as designated by the Oslo Accords, which was set to end with final status negotiations in 1999. Instead, it has been the foundation for Palestinian planning for the last 20 years, with no significant change to the PNA’s authority since their signing in 1994 and 1995.Because of the lack of final status negotiations, East Jerusalem has remained under de facto total Israeli legal and administrative control through its illegal annexation in 1967.This means PNA institutions have no authority over East Jerusalem and are forbidden from operating within its municipal boundaries. This has also affected our ability to gather data on East Jerusalem on certain indicators. Except when indicated, East Jerusalem is therefore not included in national indicators such as GDP, connectivity rates, or governance and legislative impacts. It is, when possible, addressed separately in each section.

Despite these significant obstacles, in 2009 the Palestinian National Authority undertook an ambitious plan to create and implement the necessary policies, plans, and strategies that would provide the framework for a sovereign Palestinian state over the whole of the West Bank and Gaza with East Jerusalem as its capital. An Ad Hoc Liaison Committee was created to assess the progress of these plans, which took place between 2009 and 2011 and, after an initial assessment, additional plans culminating in Palestine’s application for recognition as a non-member state in the United Nations 2012. While addressing the ongoing and pernicious activities of the IOA in undermining and restricting Palestinian development, this report also seeks to identify the achievements, challenges, and future priorities of the PNA in their continued work to develop a vibrant and successful sovereign Palestinian state.

Palestine faces the unique future challenge of integrating physical spaces that have been forcibly separated. The Israeli occupation has kept the West Bank, Gaza Strip, and East Jerusalem physically and socially separated, increasingly so since the signing of the Oslo Accords in the mid-1990s. Thus a future sovereign Palestinian state, in addition to addressing uneven urbanization within each locality, will also have to plan for the integration of the different regions which have experienced vastly different forms of urbanization. The Israeli occupation has led to atypical growth and development, even when compared to surrounding countries. Therefore some of the indicators suggested by UN-Habitat, common to other urbanizing and developing countries are not directly relevant to, or adequately expressive of, the realities here. When necessary, we have altered the indicators (for example, discussing not only water-system connectivity but also rights and access to water resources or otherwise suggested alternative measurements to give a full picture of the achievements, challenges and future priorities for Palestine. Nevertheless, there are demonstrable improvements that can and should be made by all stakeholders that will better prepare Palestine for post-independence sovereignty. In preparing future priorities, stakeholders addressed two alternative scenarios: 1) a sovereign, independent, viable state of Palestine, and 2) a condition in which the Israeli occupation is ongoing, and the governmental structures and civil society of the occupied state adapt strategies to address the needs of their citizens even under occupation.