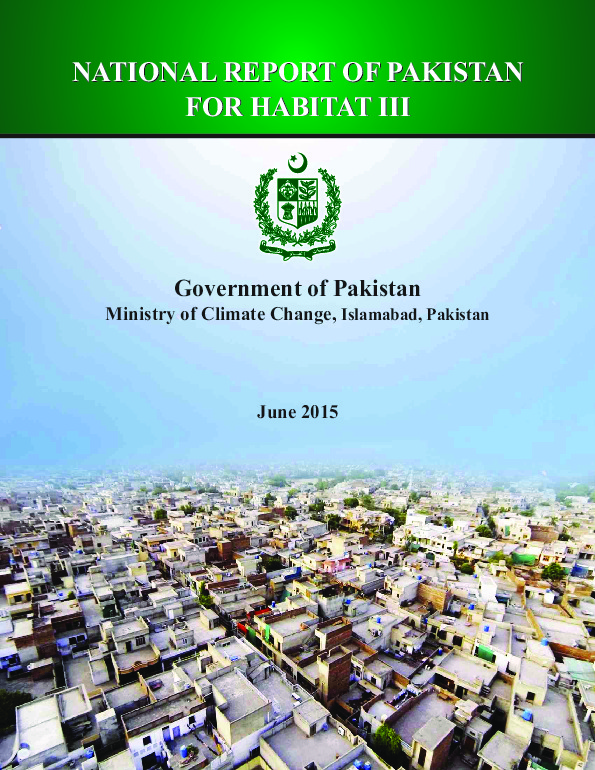 Pakistan has made commendable efforts towards implementation of Habitat - II Agenda, since the second United Nations Conference on Human Settlements (Habitat - II) held in Istanbul in 1996. The Agenda defines a set of goals and principles, spelled out unified commitments adopted as Global Plan of Action that called for taking initiatives towards creation of healthy, safe, equitable and sustainable human settlements through better management of its cities and towns in a broader macro-economic and social context so that the impacts of the initiatives taken by the government are reported at the Habitat-III conference.

Pakistan is the most urbanized nation in South Asia and its urban population has increased from 43.0 million to 72.5 million between1998 to 2014 and is expected to become pre-dominantly urbanized by the year 2025. At present about 47 percent of urban population lives in nine cities, having population exceeding one million each. The primary factor in this conglomeration is increase in rural-urban migration. As such there is a need to address the existing challenges of large urban centers while planning ahead for the continued migration towards cities.

68.4 percent of Pakistan's population is below the age of 30 years. Therefore, there is an opportunity to reap the benefits of “Demographic Dividend” till 2045, but urbanization has to cater to the needs of a huge youth group. While females constitute a little less than half of the urban population,. gender disparity in education has nearly disappeared in urban areas and in some universities women actually outnumber their male counterparts. Improved equity is also visible in terms of employed women in professions.

Challenges of accelerated urbanization include aggravating urban deficit; eroding live ability, productivity and efficiency of urban areas and degrading urban ecology. Eradication of urban poverty is another challenge. The government has adopted policy initiatives and developed Pakistan Vision 2025, followed by national and provincial policies and strategies. The government is taking measures to economically strengthen the regions neglected in the past such as Balochistan, Azad Jammu and Kashmir (AJK) and Gilgit-Baltistan. Major initiatives are the Pak-China Economic Corridor; Development of Karakorum Highway and Economic Development Program for 'Temporarily Dislocated Persons' (TDP's) in Federally Administered Tribal Areas (FATA) affected due to terrorism. It has initiated development of intermediate cities and towns in all provinces and has prepared Master Plans to improve urban infrastructure network, services and utilities to address the impact of rapid urbanization. As a result, the urban population in quantitative terms has grown from 42.968 million to 69.870 million; though the rate of urbanization has declined from 3.5 percent in 1998 to 3.3 percent in 2013.

The major issues related to land and urban planning like poor maintenance of land records and, regulatory framework have impeded the economic growth of cities and towns. Conversion of agricultural and forest lands into other uses etc. has triggered food security issues. These have retarded effective utilization of both human and natural resources. The major initiatives taken in this regard are establishment of dedicated urban planning units at provincial level; digitization of land records; promoting vertical growth of buildings; rationalization of plot sizes, integrated planning at the district level; revision of Building Bye Laws and Town Planning Regulations as well as incorporation of DRR checklist in PC-I and PC- II for development projects related to infrastructure, production and social sectors.

The most devastating effects of climate change are heavy flooding and drainage problems on the one hand and drought and urban heat island phenomenon on the other. It also effects human health due to wide spread vector, water and air borne diseases.

The main natural disasters that have caused huge losses of life and property in Pakistan have been earthquake and urban flooding. It also has serious consequences on the economy of Pakistan. According to an official damage report on the earthquake of 2005, 73,338 people died; 128,304 severely injured; and 3.5 Million rendered homeless as over 600,000 houses were destroyed. It is estimated that in the coming few years, the per capita availability of water would be less than 1000 m3 which is the threshold for declaring a country water-scarce. Water pollution is resulting in increase in diseases like diarrhea and typhoid. Total health cost of water pollution is estimated to be 1.8 percent of GDP. Quality of drinking water is below the WHO approved standards. In this respect the Government approved the National Drinking Water Policy in 2009 and National Standards for Drinking Water Quality as well as launched a Nation-wide Clean Drinking Water for All program. Water filtration plants are being installed at neighbourhood level in cities and at union council level in rural areas. Pakistan has already met the MDG target in drinking water. Land degradation is increasing. Tarbela Dam capacity has decreased by 29.32 percent due to siltation of its reservoir. The main cause of which is upstream deforestation.

One of the main problems of urban governance is the centralization of financial and administrative powers by the provincial governments despite introduction of the 18th Constitutional Amendment. As a result the third tier of government is not yet functional on-the-ground in any province. There is another issue of protection of interests of diverse society with various ethnic and religious minorities because of lack of effective governance system in some cities. Another big challenge is to create laws that not only better clarify the division and balance of power and functions between the Provincial and Local Governments (LGs) but also give strength to the efficacy of local governance. Further, there are serious gaps in implementation of government policies and regulations.

The new Urban Agenda in this regard focuses on institution of third tier of government empowered with adequate administrative and financial authorities; streamlining coordination between different land controlling agencies for integrated planning and development of cities. In terms of urban safety and security there is a need to make governance system more participative, responsive, efficient and accountable to control terrorism, crime, land tenure insecurity, protection, gender based violence and disasters. The Government is encouraging programs like Benazir Income Support Program and technical education to create job market for urban poor. The government is also working on laws and policy formulation for informal labour –i.e. Home-based workers.

Housing backlog has increased to about 9 million from 4.3 million in 1998 due to housing supply and demand gap. The current low-income housing deficit within Pakistan is 4.5 million units with an addition of 150,000 units per annum. More than 50 percent population of major cities lives in slums and squatter settlements. To overcome housing backlog the government has taken initiatives like construction of low cost housing under a dedicated Prime Minister's Program; Apna Ghar Scheme in Punjab; Behan Benazir Basti (Benazir Housing Program) and Shaheed Benazir Bhutto Housing Scheme in Sindh; and similar programs in other parts of the country. The government has approved National Policy on Slums and squatter settlements, Urban Renewal and Slum Up-gradation. The provincial governments are regularizing the slums and squatter settlements and providing with basic urban services.

Inadequate sanitation system in peri-urban and rural areas is costing 3.9 percent of GDP and is unsatisfactory. The government approved the National Sanitation Policy 2006 and prepared sanitation and hygiene standards for schools. The provincial governments have adopted Pakistan Approach to Total Sanitation (PATS) program and developed policies and strategies for its implementation. However, the MDG targets for sanitation have not been achieved as yet. Polio is also a big problem, which is also not getting in control due to inadequate and inappropriate sanitation, and a reluctance by many parents to allow the use of polio immunisation vaccines.

Electricity shortage in Pakistan continues to grow due to increased demand. If proper actions are not taken, Pakistan's estimates indicate supply-demand mismatch and for the electricity demand to double in the next ten years. The government has introduced the Integrated Energy Plan 2009-2022 to meet its energy requirements and launched a massive program which comprises of projects of accumulative capacity of 16,564 MW by 2018, based on coal, hydel, natural gas and solar energy which would bridge power shortfall. By the year 2030, approximately 10,000 MW of electricity would be generated through renewable energy sources. Currently, out of 25 million households in Pakistan, 4.3 million are connected to natural gas network. The rest are dependent on biomass, kerosene oil and Liquefied Petroleum Gas (LPG). The Government of Pakistan has launched integrated Mass transit System: Metro Bus and Metro-rail in major cities; so far the Mass transit Metro Bus system is successfully working in Lahore. The government has planned to develop a 2,395 kms. China-Pak Economic Corridor (CPEC) connecting Gwadar to Kashghar and has also planned the Karachi-Lahore Motorway (KLM), a 6-lane controlled-access motorway to ensure smooth and efficient movement of goods and passengers in a healthy environment.

Out of twelve urban indicators identified for reporting by UN-Habitat, data on eight indicators are available. The level of achievements of available indicators from 1996-2013 are presented in the report. A number of successful case studies like country-wide adoption of Pakistan's Approach to Total Sanitation (PATS); Promotion of Energy Efficient Housing and Heating technologies in Sindh, Khyber Pakhtunkhwa and Gilgit-Baltistan and Water and Sanitation Extension Program in Gilgit-Baltistan have been included in the report which present the details of successful interventions achieved from 1996 to 2014.

In a nutshell Pakistan, despite challenges of economic depression, natural disasters, terrorism, climate change vulnerabilities and high rate of migration to cities and absence of third tier of government; has largely managed the urbanization challenges and is moving forward to reap the benefits of demographic dividend from the window of opportunity that remains open till 2045. Policies and strategies are being developed and different programs are being implemented by the federal and provincial governments for overcoming the urbanization challenges and increase the growth of GDP from 3.5 percent to 7 percent as committed in 'Pakistan Vision 2025'. There is a need to initiate more projects and programs in the gaps identified in this report to overcome these challenges.