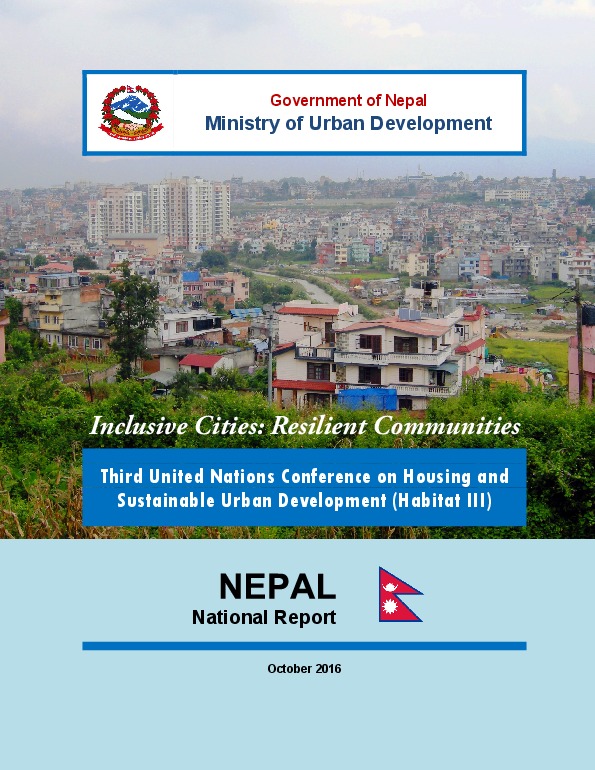 This Country Report has been primarily prepared for Habitat III following the given guidelines. The Report makes an assessment of the overall achievements of the 1996 Habitat II agenda, focuses on the issues and challenges in relation to six key areas, provides a Plan of Action as a transformative response to future challenges, and presents a new urban agenda for the next 20 years. The six key areas are: urban demography; land and urban planning; environment and urbanization; urban governance and legislation; urban economy; and housing and basic services. The process of report preparation has been consistently participatory, interactive and consultative involving key stakeholders including government agencies, local bodies, private sector, civil societies, and academia. The discussions held in different consultative forums (Professional organizations, NGOs/ CBO’s/ Civil Society, Local authorities, Youth and Private sector) contributed to form a knowledge base incorporating the views and opinions of various relevant sectors of the society. The draft report was presented and discussed in a workshop widely participated by stakeholders; and first-hand information and feedback were received. The final validation workshop was organized on August 26, 2016.

Nepal has made remarkable progress in terms of policy formulation; and strategies for responding to urbanization are more or less in place. However, the response was not sufficient to offset the challenges created by a dramatic shift in urban driven demands. The overall urban perspective has greatly widened without adequate deepening. Achievement in terms of service delivery or in protecting and upholding the rights of the service takers is far from being satisfactory. The problem of coordination increased all the more during and after the Earthquakes and the need for an apex-level body was identified and created for mobilizing resources as well as for paving the process of rebuilding. The strategy to make all the implementing agencies responsible for planned urbanization is viewed as a critical element in making the process of rebuilding better and safer. The scale of rebuilding is so huge that whatever is done and practiced during the rebuilding will have lasting effect and it will be difficult to make any changes in land use. Adherence to sustainability as a result of the lessons learnt from the Earthquake will lead to austerity in the consumption of urban space with reduction in individual space needs for housing and related activities.

Urban areas of Nepal have low urban densities, which is creating difficulty in providing urban services and per capita investment cost for the services is becoming expensive and unaffordable. Informal settlements are increasing in the urban areas. The inter-ministerial conflicts on several issues rest on the question of jurisdiction which undermined the significance of social good. The strategy to make all the implementing agencies responsible for planned urbanization is viewed as a critical element in achieving sustainable urban development. Our common public open spaces are mostly dirty, water-logged and inhabitable. Water sources are not well maintained and clean. Streets are crammed with improper garbage disposal and access for escape is not easy. Most open spaces remained underutilized during the time of Earthquakes. The main reasons behind this are that they are not well-serviced and not appropriately located; information is lacking, and there is lack of security with fear of theft, criminal activities, sexual harassment, and so on. In specific terms, this Report addresses the following problems and issues identified through intensive research on the given six key areas:

- Decreasing access of the poor to shelter in urban areas, with lack of access to land and services.

- Increasing poverty level leading to low affordability for housing and lack of affordable finance (high interest rate) – how to make simple and   affordable housing finance available is a challenge.

- Increasing consumption of fossil fuels for electricity, transportation or industry

- Yet to be explored comparative and competitive advantages of cities

- Complex and inadequate legal procedures limiting the access of the people.