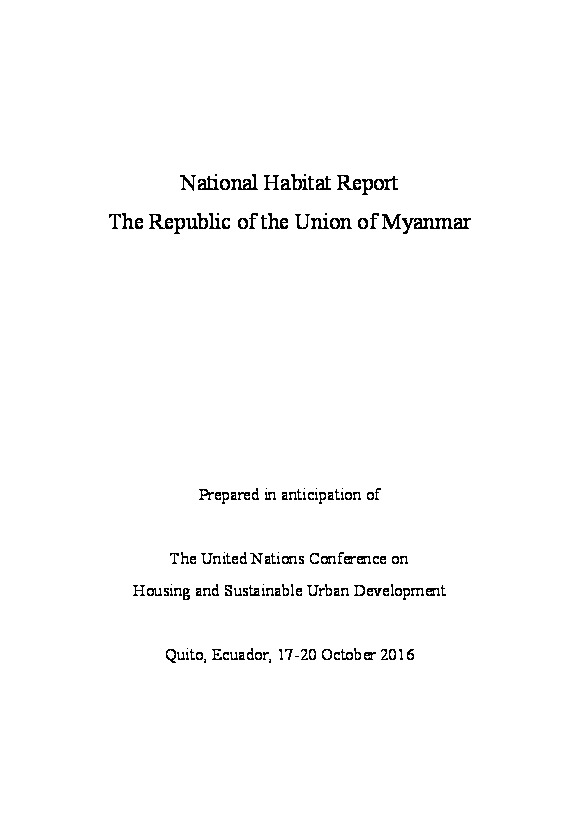 At present, more than half of the world’s population is living in cities, and by the year 2050 the world’s urban population is expected to nearly double. This poses massive sustainability challenges in terms of housing, infrastructure, basic services, and jobs among others. As such, there is a need to address the way cities and human settlements are planned, developed, governed and managed.

The Third United Nations Conference on Housing and Sustainable Urban Development - Habitat III will take place in October 2016. The conference will bring together all relevant stakeholders, including regional and local authorities, civil society organizations, the private sector, urban professionals, and technical, scientific and academic communities, to review urban and housing policies affecting the future of cities within an international governance structure. The conference will generate a New Urban Agenda, which harnesses the potential of cities and human settlements to help eradicate poverty in all its forms and dimensions, reduce inequalities, promote inclusive growth, and achieve sustainable development. The adoption of the new Agenda will be the first step towards operationalizing sustainable urban development in an integrated and coordinated way at global, regional, national, sub-national and local levels. Further, its implementation will drive the achievement of SDG 11 of making cities and human settlements inclusive, safe, resilient, and sustainable, as well as of other relevant goals and targets across the whole 2030 Agenda for Sustainable Development.

The purpose of the National Report is to take stock of Myanmar’s current status of human settlements, identify ongoing projects and innovations, and look at a prospective emerging vision for human settlements in Myanmar towards the creation of the new urban agenda at Habitat III.

While the urban development sector in Myanmar is still in its very early stages of development against the backdrop of ongoing institutional and political reforms leading to democratization and opening of the economy, the new Government has renewed the focus on urban issues and significant transformations have been seen in just the past few years since 2012. These include the development of national-level policies such as a National Urban Policy setting the foundation for well-managed, sustainable urbanization, and a National Housing Policy that aims for inclusive and affordable housing for all citizens; a National Spatial Development Framework as a first step towards integrated spatial planning and balanced urban growth by assigning strategic value to various towns and cities in Myanmar; and the Myanmar National Building Code which includes measures of safety and disaster-sensible use of materials, construction technics and technologies, as well as specific provisions for energy and water supply efficiency contributing to the sustainable growth of urban areas. Additionally, legal frameworks such as the Urban and Regional Planning Development Law are being established to guide the development of spatial plans, integrating environmental and social concerns. Moreover, institutional reforms are being implemented to support the decentralization of planning authorities, and urban planning on the local level was established after decades of absence in 2012. Outside major cities, the Government of Myanmar is pursuing small-scale settlement planning, particularly focussed on small villages in forest areas and regularizing the villages for habitation under the General Administration Department.

Myanmar ranks among one of the countries at highest risk to natural hazards, due to its degree of vulnerability to natural hazards. Both cities and towns in Myanmar are exposed to recurring rapid on-set natural hazards, such as cyclones and floods, which are exacerbated by global climatic changes. As such, Myanmar is also taking measures to mainstream climate change into climate- sensitive sectoral policies, including urban development and closely related sectors. The NLD government has renewed this focus, redeveloping urban concept plans to increase resilience to disasters. In addition, given its advantage of being at comparatively early stages of urbanization and having the opportunity to steer the process towards achieving urban resilience, Myanmar acknowledges the need to engage early in the impending process of urbanization to create resilient, sustainable and low-carbon towns and cities, regardless their size, and over the long-term through realistic means.

The National Report for Myanmar is divided into 5 Sections. Section 1 provides a brief summary of the background, including geographic and socio-economic characteristics, the political context and unique administrative topography which influence the understanding of urban demographics and various aspects of urban development in Myanmar. Section 2 provides a snapshot of urban demographics in Myanmar, describing the current trends of urban growth and population dynamics, drivers of urbanization as well as projections for future urbanization. Section 3 encompasses the issues of land and urban planning, housing, and urban basic services and infrastructure. This section highlights the achievements and current efforts of various tiers of government in Myanmar towards strategic, integrated and coordinated planning among sectors closely related to urban development (i.e. housing, infrastructure, basic services and transportation), as well as future plans to address the challenges that these sectors face with the goal of achieving inclusive and sustainable urban growth. Transformations in urban governance, legislation and economy, which support development in these sectors are also integrated into this section. Section 4 describes environment and urbanization issues in respect of climate change and disaster risk reduction in Myanmar. Section 5 presents case studies of successful initiatives and policy measures that have made significant impacts in the realm of urban development in Myanmar.