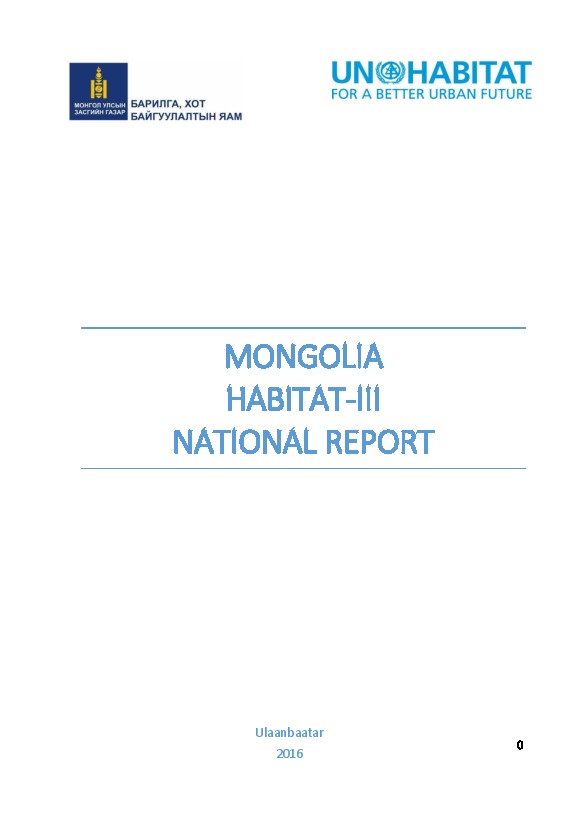 Mongolia has witnessed the rapid urbanization owing to the phenomenal transition to democracy and market-oriented economy since 1990s. Due to the privatization of livestock along with privatization and bankruptcy of inefficiently running state owned enterprises and economic entities, urban-rural migration has swelled resulting in increased rural population in 1990-1998. However, since 1999, the urbanization has been rapid again due to reverse migration from rural to urban areas.

The urban population that accounted for 52 percent of total population of Mongolia in 1996 goes up to 63 percent in 2006 and 68 percent in 2013 subsequently. The rapid urbanization process in Mongolia has been influenced with the following factors, including:

- Disparity of urban and rural development;

- Failure of policy on the development of rural town infrastructure and  industrialization;

- Disparity in public services quality and adequacy in culture, education and health;

- Failure of appropriate demographic market centralization for rural small and  medium business and services leads to shortage of workspace, hence the  migration starts for sustainable employment opportunities with decent earning;

- Migration of rural people who have lost their livelihood resources due to natural  disasters- draught, dzud etc, the consequence of climate change;

The migrating population to urban cities seeking for employment opportunities and exceeding supply of labor market demand for urban population have been contributive to the increased unemployment and poverty rate. Within 9 goals and 24 targets of Millenium Development of Mongolia, the target was set out under the objective for poverty and hunger elimination that claims to “Halve the proportion of people whose income is below than minimum living standard between 1990-2015”, however, the target has not been achieved in reality.

In 1995 the poverty rate that was 36.3% by national average and 38.5% in urban city was supposed to halve to 18% in 2015 according to the target and as of 2014, the poverty rate indicates as 21.6% at national level, 18.8% and 27.9% in urban and rural areas respectively. The lowest level of poverty rate in urban areas is linked to the prevailing development of production and services along with the population density.

Mongolia has adopted and enforced the Law on Urban Development since 1998. The objective of the law underlies, within the legal framework of urban development policy of Mongolia, to regulate the relations between the government, business entities, institutions and citizens to develop appropriate regional development structure for population settlement and independant development and to establish towns and cities in accordance with urban planning.

As pursuant to the law of Mongolia on legal status of cities and settlements, the cities with national and aimag status are determined with criteria as the following:

- A city with national status refers to a city with over 50 thousand residents and in terms of contribution to national socio-economic development, urbanization and infrastructure development level;

- A settlement with aimag status refers to a settlement with not less than 15 thousand residents’ majority of who are employed in production and services industry and urban infrastructure has been developed.  A city with national and aimag status includes current 21 aimag centres and capital city of Ulaanbaatar. Darkhan, Erdenet and Ulaanbaatar cities comply with the criteria on residential population for a city with national status. In contrast, majority of 21 aimag centres have up to 15001-50000 residents and the cities with aimag status have been 15 in 1996, 13 in 2006 and 16 in 2013 respectively.  The Ministry of Construction and Urban Development of Mongolia has held the “Urban Development Forum” since 2012 jointly with representatives of ministries, local authories, private sector, non-governmental organizations, foreign donors and UN Humans Settlement Program. The forum has enabled to address the urgent issues encountered in urban development sector with all stakeholders, in particular with local authorities and private sector as well as to introduce best global practice.