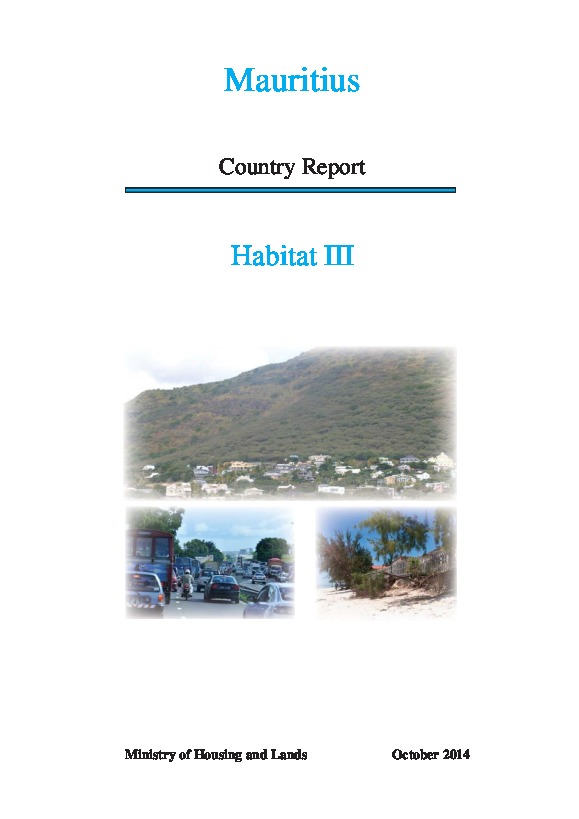 Rapid urbanization is a process which is a result of high population growth occurring naturally and from in-migration leading to accelerated demand for infrastructure, employment and housing, increased use of resources, environmental degradation. This unsustainable pressure offsets development opportunities and creates problems of management and control. In Mauritius, the population density is naturally higher in towns. In 2011, the five towns of the country contained 42% of the population on 8% of the land area with a density of 3,000 persons per square km. By contrast, the villages contained 58% of the population on 92% of land area with only 400 persons per square km.

Though the population has doubled over the last 50 years, the rate of growth has considerably slowed down recently. The resident population of the Republic of Mauritius went up by only 4.9% at an annual rate of 0.4% during the intercensal period 2000-2011. In absolute numbers there has been an increase of 53,314 due to increase of the rural population. All the urban areas except one have lost population. Port Louis the district and capital city lost population which went down by 0.69 on an annual average.

Population growth has stabilized with a slow rate of increase and the urban areas are actually losing population. The population pyramid shows the profile of the developed countries by having a narrow base and a wider top.

More than half of the population lives outside urban areas however most of the employment areas are in the urban areas inducing a high level of commuting. The island has a relatively good connectivity index when compared to other countries. This is reflected in the total length of roads which has increased from 2000km to 2112km over the 2002 to 2011 period.

A serious effort to connect the urban densely populated areas to proper sanitation has resulted in the two urban districts leading in terms of connection to a sewerage system. Port Louis and Plaines Wilhems are connected to the rate of 87% and 39% respectively.

Alongside the historic urbanisation around and along the main transport corridor, the land use scenario has been substantially modified with changes induced in the sugar sector economy. Following the implementation of the EU sugar reform leading to a drastic cut of 36% in sugar prices, the major sugar sector stakeholders moved into real estate development namely residential, commercial, Business Parks, and Integrated Resort Scheme/ Real Estate Scheme the last two types of activities geared towards luxury housing for rich foreigners given the vast areas owned by the sugar estates.

Services and shopping malls have developed along main transport corridors while higher income housing is moving towards coastal areas close to tourism centres. This has led to a dispersal of the urban forms in a polycentric form which has been costly in terms of connectivity.

Housing development for the lower strata of the population especially those benefitting from redundancy package from the sugar sector has grown around all the main settlements in rural areas. Urbanisation pattern broadly follows the spatial framework approved by Government which favors the release of land which can be easily connected to existing physical infrastructure. Prime agricultural land and land of environmental sensitivity are normally protected from development.