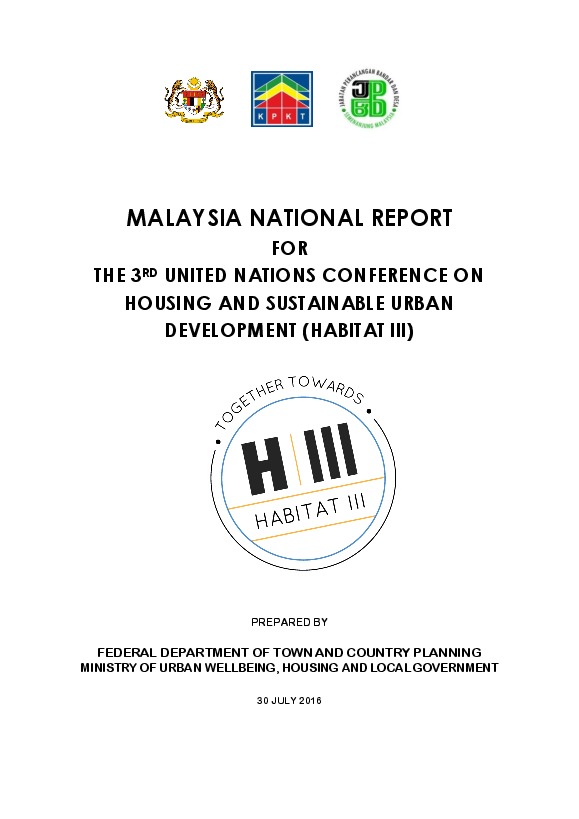 Malaysia is a nation located in the Southeast Asia, bordered by Thailand, Indonesia, and Brunei, and shares water boundaries with Singapore, Vietnam, and the Philippines. Malaysia has coasts along the South China Sea.

Malaysia has made huge strides in socioeconomic development over the past 4 decades, transforming itself from an underdeveloped country reliant on natural resources into a middle-income country with a vibrant manufacturing sector. Malaysia is among the more urbanised countries of East Asia, and its urban population continues to increase rapidly.

However, urban areas in the country are among the least dense in East Asia. The Kuala Lumpur urban area is one of the largest in the region as measured by area, but not as measured by population. Malaysia has the fourth-largest amount of built-up land in East Asia as of 2010. Its urban land grew from about 3,900 square kilometres to 4,600 between 2000 and 2010, an average annual growth rate of 1.5%, which was lower than the 2.4% average for the region. (The World Bank, 2015).

The Malaysian society is rapidly transforming into an urban society. Urbanization is a continuous population concentration process in the city and metropolitan areas which plays an important role in the development and modernization of society. Definition of urbanization in Malaysia refers to the gazetted area and the criteria used in 1970, 1980, 1991 and 2000 Population Census. The area gazetted as urban areas must have a population of 10,000 and more and gazetted areas with their adjoining built-up areas and combination of both areas have a total population of 10,000 or more. (Department of Statistics, 1995 & 2001).

In tandem with Malaysia's rapid development, the proportion of urban population increased to 73% in 2014 compared with 62% in 2000. Apart from Kuala Lumpur and Putrajaya with 100% level in urbanisation, the other states with high level of urbanisation were Selangor and Pulau Pinang with 91.4% and 90.8% respectively. Conversely, the states with lower urbanisation levels were Kelantan (42.4%), Pahang (50.5%) and Perlis (51.4%) (Department of Statistics, 2010). Malaysia is among the more urbanized countries and economies in the region in demographic terms, after Japan, the Republic of Korea, and Singapore.

The urbanisation rate will reach 77.2% in 2020 and is expected to increase to 79.8% by 2025(Department of Statistics, 2010). The main conurbations of Greater Klang Valley, Georgetown, Johor Bahru, Kuantan, Kuching, and Kota Kinabalu will continue to be the nexus of economic and social activities, housing major global companies and talent. The large middle-class population in these areas will be a huge consumer market for local and global products and services. Demand for modern, integrated infrastructure, efficient urban services, and green spaces will increase.

Vision 2020 targets Malaysia to be a developed nation economically, socially, politically and spiritually by year 2020. The manifestation and aspiration of Vision 2020 sets the framework for which development is to be steered. The nation is now in its second phase of development towards achieving the Vision. Rapid globalisation, progression in science and technology and the need to capitalise on knowledge-based economy requires the country to have a strong foundation in order to be competitive with other nations. In this context, the direction of development has to be planned and managed systematically and comprehensively to induce the country’s capacity to compete globally. The urban sector is an important catalyst towards national economic growth and a vital investment centre for the nation.

Apart from being a centre for social and recreation, urban sector plays an important role in attracting local and foreign investors in economic activities. Therefore, a township must be able to provide a good and competitive environment, complemented with all forms of activities within its territory. Peninsular Malaysia is expected to experience a rapid process of urbanisation by year 2020, with a majority of the population being urbanized. The increase in population means additional space is required for housing, public amenities and infrastructure. Hence, development to be carried out should be able to bring a good return whilst priority being given to environmental protection, through a balanced and optimal use of national resources.

Government will accelerate efforts to achieve universal access to quality healthcare by targeting underserved areas, and increasing capacity of both facilities and healthcare personnel. Social cohesion and unity programmes will be strengthened to promote an understanding of diversity through interactions and shared experiences. Malaysia will contribute towards strengthening partnerships between various stakeholders for development of Malaysia Urban Agenda for the next 20 years and beyond. Malaysia National Report will compile relevant information on housing and urban development drawing on the guidelines for the preparation of National Reports Habitat III.