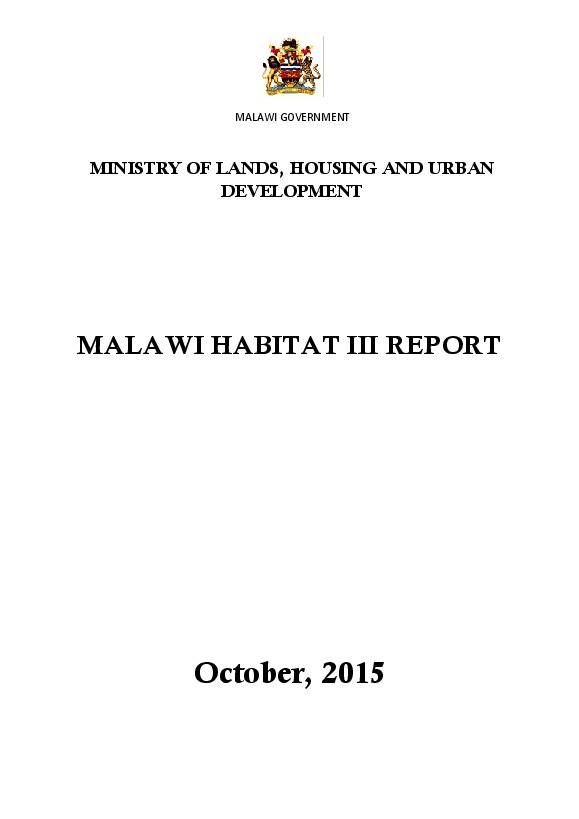 The Habitat III National Report (the Report) for Malawi presents progress that has been made in relation to a number of set thematic areas since the second United Nations Conference on Housing and Sustainable Urban Development (Habitat II) held in 1996 in Istanbul, Turkey. The Istanbul Conference acknowledged that urbanisation needs to be guided rather than prevented and adopted an agenda for human settlements (the Habitat Agenda) which revolved around two main themes: “Adequate shelter for all”; and “Sustainable human settlements in an urbanising world”.

The Government of Malawi committed itself to implement the Habitat Agenda. The current Report assesses the implementation of the Habitat Agenda, highlighting policies, legislation, practical measures undertaken, achievements made, as well as challenges, emerging issues and priority areas for action in the New Urban Agenda.

The Report fulfils the UN-Habitat Governing Council’s requirement for Member States to prepare national reports which consider the implementation of the Habitat II agenda as a basis for the formulation of a New Urban Agenda. It is an essential requirement for the preparatory process leading up to the third United Nations Conference on Housing and Sustainable Urban Development (Habitat III), which will be held in the city of Quito, Ecuador, from 17 to 20 October 2016.

The Report was prepared following consultations with Stakeholders and Habitat Agenda Partners (HAPs) and sets a New Urban Agenda for Malawi for the next 20 years in accordance with the priorities made by the Stakeholders and HAPs.

The Report covers the following themes:  Urban Demographics; Land and Urban Planning; Environment and Urbanisation; Urban Governance and Legislation; Urban Economy; and Housing and Basic Services. The Report discusses what has been achieved under those broad themes through the Habitat Agenda.

While  some achievements have been made through the Habitat Agenda in respect of each of the thematic areas outlined above, there have been challenges and lessons learnt. In addition, the Report identifies future challenges which could be addressed through a New Urban Agenda.

Malawi has made a number of achievements in the twenty years since the adoption of the Habitat Agenda in 1996, but a number of challenges have been encountered along the way. The Decentralisation Policy of 1996 set in train a series of administrative reforms which, among other things, saw the devolution of planning powers from central governments to local governments, thus enabling emergence of a grassroots-friendly, bottom-up approach to planning which is in line with the Sustainable Development Goal of inclusive and participatory urbanisation.

Through the Habitat Agenda, the GoM has implemented a number of programmes which have assisted in managing rapid urbanisation as well as in realising the goals of sustainable urbanisation. These include re-launching the Rural Growth Centres project, the implementation of the latter phases of the SCDP, which although it was concluded in 2007, has played a significant role in implementing infrastructure development programmes in the financially challenged medium size towns such as Balaka, Dedza, Karonga, Kasungu, Liwonde, Luchenza, Mangochi, Mzuzu and Salima.  The Participatory Slum Upgrading Programme implemented with UN-Habitat assistance, as well as other slum upgrading programmes have to some extent improved the lives of people living in slums and contributed to the decline in the proportion of urban dwellers living in slums. Reforms in the road transport sector and a government commitment to improve the flow of digital information and promote communication for business purposes have strengthened rural-urban linkages.

However, challenges have been experienced in managing the country’s rapid urbanisation. Managing rapid urbanisation sustainably requires adequate resources for the creation of sufficient jobs and the provision of adequate infrastructure and services such as schools, health centres, housing, recreational facilities, among others. However, Malawi is among the poorest countries globally and, with an estimated 2014 GDP per capita of $US272.16, it is the second poorest country in the SADC region after Madagascar’s. The constraints posed by Malawi’s poor macro-economic performance are significant and has affected the country’s ability to improve conditions of living in the fast-growing urban centres, leading to poor infrastructure and service provision.

Moving forward towards the post-1996 Habitat Agenda, a new urban agenda for Malawi needs to be formulated. The Sustainable Development Goals (SDGs) form the basis for articulating a new urban agenda for the country. Goal 11.1 – ensuring access for all to adequate, safe and affordable housing and basic services, including the upgrade of slums – requires adequate financial resources and a strong national development policy which places greater priority on urban development issues. The challenge for the new urban agenda is to address the underlying causes of poverty in this country but also to prioritise urban issues in the country’s overall development planning.

In the area of gender participation in urban development, the Report observes that notwithstanding the constitutional and legal protections upholding equality between men and women, women in Malawi are under-represented in urban governance as councillors as well as in local government management. This situation is largely due to deep rooted cultural beliefs which hamper women’s participation in public life. This needs to be addressed in the new urban agenda for Malawi.

Under the theme of “Land and Urban Planning”, the GoM has taken steps to improving urban land management to ensure sustainable urban planning. Noting the land-related challenges to sustainable urban planning, the GoM formulated and adopted the National Land Policy (NLP) in 2002. The policy contains a wide range of land related reforms which are proposed to be translated into law in the Land Bill which is currently being considered by parliament. Some of the reforms include improvements to the registration of land titles in urban areas through the devolution of land registration from central government to local government, and measures to resolve the conflict between planning authorities and chiefs in urban land administration matters, a factor which has been blamed in some cases for the proliferation of informal settlements.  However, it is unclear when and if the Land Bill will be enacted into law, given the tortuous path it has taken since when it was passed by parliament in June 2013 and the current scenario when it has returned to parliament but it has faced delays in being re-tabled to facilitate enactment. This is a challenge for the new urban agenda.

The NLP does not only provide for reforms in urban land management, but also offers practical measures to address urban sprawl by enforcing more intensive use of urban land through the revision of planning standards to promote compact urban development. Some of these measures are already under implementation. The government has revised the Town and Country Standards and Guidelines in 2010 and prepared Land Use Planning and Development Management Guidelines and Standards in order to enhance adequate housing and reduce urban sprawl. Crucial to the revisions is the reduction in plot sizes so that more people are accommodated in urban space. Whilst the signs of contained urban sprawl are yet to be seen in the development of Malawi’s urban centres, this is an important major step towards addressing the issue.

The GoM has taken steps to improve the technical capacity of Malawian professionals to plan and manage the rapidly growing urban settlements. The GoM has responded to the critical shortage of qualified personnel in the urban land management sector by supporting the establishment of planning and planning-related degree courses at two of Malawi’s public universities in 2006 – Mzuzu University and University of Malawi’s Polytechnic. In addition, the Natural Resources College in Lilongwe also offers diploma courses in land administration and diploma graduates with good grades at graduation can apply to Mzuzu University to upgrade to degree level. These measures have resulted in an increasing number of locally trained land management professionals who have addressed the critical shortage of qualified human resources in the urban and land sector.

Deregulation in the urban transport sector has resulted in public transport being privatised and private mini buses overtaking buses as the main mode of urban transport. Mini buses are poorly regulated and this has brought about a number of mobility problems in urban areas, such as congestion. Although the most dominant mode of urban transport is walking, the use of bicycle taxis and motorcycle taxis is increasing rapidly. Likewise, the use of private motor vehicles is also on the increase. With rapid urbanisation and rising car ownership, congestion on urban roads, compounded by lack of implementation of urban road networks, is on the rise. Whilst the problem is not pronounced at the moment, the decline in mass public transport in Malawi’s cities has worrisome consequences from a sustainable urban planning perspective. There is need to integrate sustainable transport planning in line with SDG 11.2, which seeks to provide for access to safe, affordable, accessible, and sustainable transport systems for all, as well as improving road safety, notably by expanding public transport.

After ten years of the absence of local government elections between 2004 and 2014, Malawi took significant steps to improve urban governance by conducting tripartite elections in May 2014 and ushering in elected local government representatives. This has boosted local democracy and has enhanced participatory frameworks in the area of urban planning which are essential for sustainable urbanisation. Local councils are mandated to formulate and pass bylaws for the smooth operation of local affairs such as increasing city rates to increase revenue for service provision. The election of councillors raises prospects for better service provision and open, accountable urban governance. In addition, it is a major step towards ensuring participatory and inclusive urban planning. This is in line with SDG 11.3, which urges governments to enhance inclusive and sustainable urbanisation and capacity for participatory, integrated and sustainable human settlements planning.

In theory, these measures should financially empower local governments and enable them to adequately delivery services. In practice, central government has failed to remit the required funding to local governments. At best, only about 2% of the revenue raised has been disbursed. In the absence of councillors between 2004 and 2014, revenue from city rates dwindled because councils were legally constrained from increasing city rates. In addition, government does not always honour its obligation to pay city rates in a timely manner. With the SDGs placing a greater emphasis on the sustainable management of cities, urban councils will require greater financial empowerment to meet their various obligations to their citizens. This calls for greater consideration in the new urban agenda.
SDG 11.a broadly provides for support towards the economic development of cities as a strategy to enhance regional and national development. This is an important issue for the new urban agenda. There are a number of future challenges in the areas of improving municipal / local finance, strengthening and improving access to housing finance, supporting local economic development, creating decent jobs and livelihoods, and integration of the urban economy into national development policy that will need to be addressed in the new urban agenda for the country.

Data from the recent GDP by activity report published by the NSO suggests that Malawi’s cities contributed more than 50% to the national GDP in 2014. This proves the assertion that cities are engines for economic development. There is potential to significantly improve the cities’ contribution to economic development if the draft national urbanisation policy is adopted. As Malawi moves forward to adopt a new urban agenda, priority needs to be given to the urban sector in the same way that the GoM has prioritised the rural sector through favourable agricultural development policies.

Under the theme of housing and basic services, GoM has made a number of efforts over the past twenty years such as implementation of slum upgrading projects, increasing access to clean drinking water, increasing access to adequate housing, ensuring sustainable access to basic sanitation, among others. For example, the proportion of the urban population with access to safe drinking water was 78.8% in 2013, thus exceeding the MGDs target of 74% set for 2015. However, progress towards improved access to adequate housing is slow because access to serviced land for all income groups is a big problem for the urban authorities.