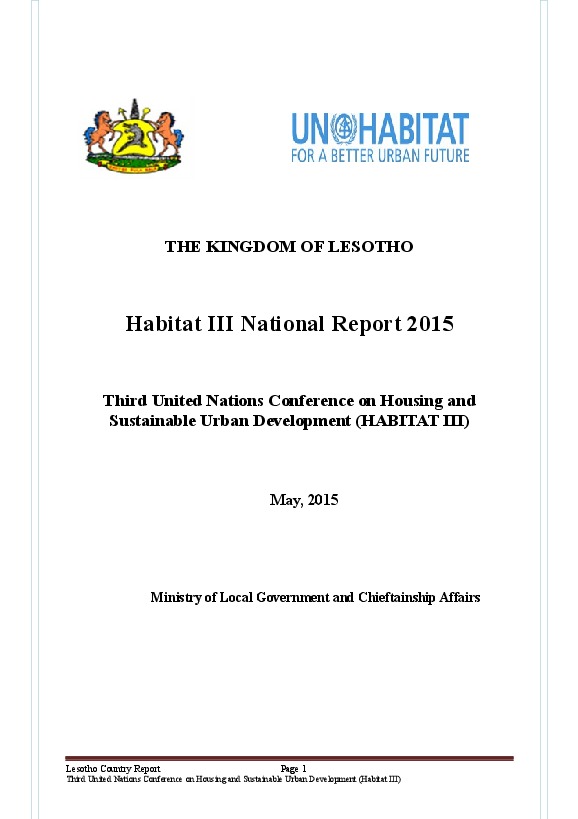 The Kingdom of Lesotho is a small mountainous country of 30 355 km2, entirely landlocked inside the Republic of South Africa. It is bounded by the province of Kwazulu-Natal to the east, the Eastern Cape to the south and the Free State to the north and west. The western quarter of the country is lowlands and foothills that rise from 1 388 to 2 000 metres above sea level while the remaining three-quarters comprise highlands, which rise from 2 000 to 3 482m above sea level, the point of the highest peak, Thabana-Ntlenyana, in Southern Africa. The country is divided into ten (10) administrative districts as shown on map 1.There are twelve (12) gazetted urban centres, including Maseru. Ten of these urban centres, with the exception of Maputsoe and Semonkong, also serve as administrative headquarters for the districts. Eleven (11) of the urban centres were designated Urban Councils in 2011 whilst Maseru has been designated a Municipality since 1989.

An estimated (30%) of the population resides in the highlands region while (70%) resides in the lowlands and foothills region .The average population density is 61 persons/km2, ranging from 24 persons/km2 in Mokhotlong district to 112 persons/km2 in the Berea district. Expressed in terms of arable land, the density averages 658 persons/km2, with the lowest density of 485 persons/km2 being in the district of Thaba-Tseka, while the highest density of 902 persons/km2 is in the district of Maseru. The population of Lesotho is predominantly rural, with slightly over (72%) residing in rural areas or outside urbanized settlements. According to the MDG Status Report (2013), the rural population depends to a large extent on subsistence agriculture for their livelihoods. However, that is limited by the fact that only (9%) of the land surface is available for arable farming, hence resulting in the country relying heavily on food imports from the RSA as domestic cereal production satisfies only (30%) of the country's food requirements. As of 2006, arable land made up only (9%) of the Country, having declined from 3,134 km2 in 1996, with that loss mainly attributable to soil erosion and encroachment by human settlements.

Lesotho is economically classified as a lower-middle-income country, with a per capita income of about US$1000.Poverty figures indicate that 57.1 per cent of the population lives below the national poverty line. The NSDP (2012/13-2016/17) estimates that (21.4%) of households (117,309 out of 548,032) are at risk of what it calls 'multi-dimensional poverty', although the government old-age pension scheme that was introduced in 2005 for all citizens aged 70 and above, is acknowledged to have had significant mitigating impact on poverty. The NSDP also mentions that Lesotho's income distribution is unequal with a Gini coefficient of 0.54.

As of 2008, an estimated 608, 000 economically active people were employed, while 192,000 were unemployed, thereby representing an unemployment rate of (24%) (NSDP, 2012/13-2016/17). The NSDP further states that 230,000 of those who were employed were in formal wage employment while the rest (71.1%) were employed informally. The numbers of Basotho working in the mining industry of South Africa also declined from 50,000 in 2005 to 41,555 in 2010. Local employment in the Lesotho National Development Corporation (LNDC) assisted firms that dominate the clothing and textiles manufacturing sector also declined from 46,386 in 2009 to 45,595 in 2010 (NSDP, 2012/13-2016/17).The public and private sector wage jobs account for more than half of employment in urban areas, and the World Bank in 2008 praised the textile sector for providing most opportunities for young women migrating from rural areas.

According to the MDG Status Report, the economy of Lesotho grew by (4.3%) (real GDP) in 2013. The Report further observes that excessive dependence on the Southern Africa Customs Union (SACU) receipts, reliance on miners' remittances and textile exports to the United States of America continue to render the country vulnerable to external shocks. For example, revenue from the SACU has been declining due to global economic and financial crisis, yet a significant proportion of the national budget depends on it, at (53%) in 2012-13; (42%) in 2013-14 and an expected (48%) in 2014-15.According to the NSDP (2012/13- 2016/17),the growth of the economy of Lesotho since the 1990s was boosted by strong growth in the construction, mining and textile sectors, which had become the largest sectors of the economy by 2005. However, during the same period, agriculture grew at only half that rate, with its contribution to GDP falling to (15%). Furthermore, remittances from migrant workers as a share of GDP also declined by half, with earnings from domestic employment filling the gap of supporting domestic consumption. For example, since 1990, an estimated 64,000 RSA-based mining wage jobs were lost, while at the same time about 40,000 new jobs were created in the public and the textile sectors locally. The mining sector increased its share of GDP from (0.2%) in 2000 to (7.3%) in 2009/10 (NSDP, 2012/13-2016/17).