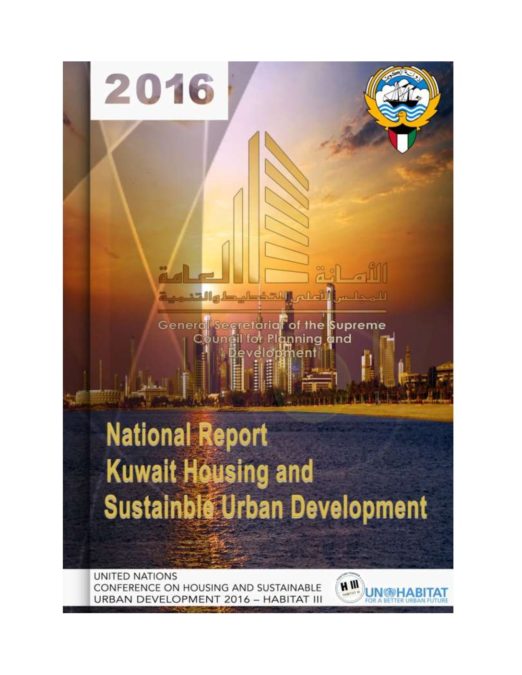 Kuwait is an oil producing country and is a member of the Gulf Cooperation Council, with an area of 17,820 sq. km. In 2014, the Gross National Product (GNP) in PPP (or purchasing power parity) was USD 83,961 Human Development Index (HDI) of the same year was 0.816.

1. Kuwait's population has grown from 0.99 million in 1975 to 4.18 million in 2015. The country is essentially a city-state where more than 98% of the total population resides in the urban areas. Most of the population is concentrated in the Kuwait Metropolitan Area to the south-western and eastern edges of the country as well as a few other surrounding urban areas, all of which cover about 8% of the country's total land area. The government has therefore designed policies to begin developing new cities and rural town areas in the northern, northeaster, western and south-eastern parts of the country to relocate the rapidly increasing population in the Kuwait Metropolitan Area.

2. The total population of Kuwait includes Kuwaiti citizens and non-Kuwaiti residents. As of 2015, the proportion of the Kuwaiti population to the non-Kuwaiti population was at was 31% to 69%, returning to the same figures of the 1975 census; the government has been working on developing immigration and demographic policies that hope to change the distribution to 40% to 60% by 2030.

3. Kuwait has a hot desert climate, with infertile soil and a lack of rivers or freshwater sources. Because of this lack in sufficient natural freshwater sources or arable lands, as well as a lack in well-trained farming labor, Kuwait’s rural and agricultural economy is very small. With the new urban agenda, the government recognizes the need to bring in dry land, urban agriculture, and aquaculture technologies as well as the other necessary resources and skilled labor to enhance its food production.

4. Kuwait’s general parameters for the youth population range from 14-34 years of age. In 2011, those aged 15-24 made up 17.5%, while those aged 15-34% comprised 35.1% of the national population. Since the needs of this population vary greatly with different ages, the government is currently developing and designing youth policies, to be prepared within this year, to best address the varying needs of these youth, before a policy-based program is implemented d in the new urban agenda.

5. In 2011, the elderly population, that is citizens aged 65 or above, comprised 3.3% of the population. The government provides old-age pension and other benefits to the elderly, including health care which is free for all Kuwaiti citizens. Government policies stipulate that the children and immediate family members of the elderly are responsible for the care of their elderly family members, and this will continue in the new urban agenda.

7. The government is also working towards better standards of gender equality and protecting the rights of women. In 2005, women were given the rights to vote and stand for membership and elections in the National Assembly and Municipal Council.

8. Kuwait was one of the first countries in the Arabian Gulf to prepare a Master Plan for the state’s urban development. The first Kuwait Master Plan (KMP) was developed in 1952, designing plans for self-sufficient low-density neighborhood units that were separated by radial ring roads, expanding beyond the walls of the old city. Motor vehicles are the chief mode of transportation for mobility on the resulting developments in roads and motorways for the expanded city.

10. The main aim of the Third Kuwait Master Plan (KMP), currently in use, is to transform Kuwait into a financial hub by 2035. This transformation is hoped to attract bigger foreign investments to contribute to diversifying the economy, lessening national dependence on oil exports. The Third KMP also included plans to further distribute the increased population towards the northern and southern parts of the country, by developing new cities, which would in return create new jobs.

11. The fourth Kuwait Master Plan (KMP) is in development, to be completed by 2018 through a tender in collaboration with global consultations to ensure unprecedented urban renewal and development in Kuwait.

14. Kuwait Metropolitan Area lies within the proposed green belt/buffer zone. The green belt is outlined to the western part of the metropolis, and beyond this are the oil fields, water fields, and military installations. Unlike many other countries, there is no peri-urban area adjoining the Kuwait Metropolitan Area; this makes it difficult to develop the facilities for dry-land agriculture, urban agriculture, and aquaculture.

15. Though there are plans for rail systems such as train and subway systems, Kuwait’s current transportation systems are limited to road transport for the use of automobiles or motor vehicles. At present, there is heavy use of private vehicles or taxis, and equally heavy use on public (and private) bus transportation by the resident and citizen population. The increase in the number of motor vehicles on the road has resulted in increased congestion, pollution, and mobility challenges in the Kuwait Metropolitan Area; improved traffic infrastructure and controls and better parking solutions have been identified as ways to mitigate some of these problems.

16. There is a heavy, almost exclusive reliance on oil and gas to produce energy and distribute products across the nation; the general technology segment of the energy sector remains inactive, and the use of renewable energy sources such as solar, wind, tidal and geo-thermal power for energy production is very low, and so this dependence on oil and gas increases the content of carbon dioxide in the atmosphere, contributing to rising sea levels and global warming. This therefore creates a key opportunity to begin serious exploration and use of alternative energy sources for future eco-friendly finance and investments. The Kuwait Institute for Scientific Research (KISR) has already conducted research to enhance the use of cleaner energy and reduce carbon emissions, completing studies on the production of 75-100 MW(megawatts) electricity from renewable energy sources.

17. Kuwait is vulnerable to sudden heavy rains, which can result in some flooding, sandstorms, and dust storms, as well as tremors from nearby earthquakes in Iran and other locations. Weather monitoring stations and seismic networks have been set up in Kuwait to understand the meteorological situations and to provide early warning.

18. The Ministry of Public Works has launched an on going program to improve road infrastructure in Kuwait, increasing the length and reach of roads and bridges to relieve traffic congestion and raise the efficiency of the transportation system in place.

19. Kuwait is, basically, an urban country administered by the central government. Each government ministry such as the Ministries of Health, Education, Housing Welfare, Social Welfare, etc. has a specific role in the urban area. Thus, in order to improve urban legislation, cooperation and active participation of all these ministries is needed. The Kuwait Municipality is a key agency devoted to the planning and development of the urban areas in the country; it can thus act as a focal point for the improvement of urban legislations.

20. Kuwait consists of six governorates: al-Asimah (the Capital), Hawalli, Farwaniya, Mubarak al-Kabeer, Ahmadi, and al-Jahra. Each governorate is appointed a governorbythe government in order to strengthen the provision of services in their respective governorates.

21. In 2016, the Cabinet of Ministers approved a draft decree regulating the system of governorates and the powers of their governors, with the purpose of remodeling public services nationwide and reflecting more positive public participation. As per the new efforts towards decentralization, each governorate will have a council with more executive powers over their respective areas; these councils will gradually have duties currently handled by ministers delegated to them instead.

22. All Kuwaiti citizens enjoy civic, economic, and social rights, and most Kuwaitis enjoy adequate standards of living. Kuwaiti women and men participate in local cultural programs, and special care is given to people with different needs or disabilities.

23. Kuwait is a safe country. Insecurity of tenure and forced evictions do not generally happen in the country. Natural disasters such as dust storms, sandstorms and sudden heavy rains happen in certain seasons. Man-made disasters are also uncommon, with the exception of motor vehicle accidents.

24. The State of Kuwait has made significant progress in providing equal opportunity for all Kuwaiti children, youth, adults, the elderly, women, and persons with disability in their access to health and education as well as civil participation in the country’s social and economic progress. The government is also reviewing laws to enhance equity and fairness in society.

26. The government's revenue mainly comes from the sale and export of its oil. Thus, any increases made to municipal budgets for local expenditure are possible, if the government is convinced that they are necessary.

27. In order to strengthen the access to housing of Kuwaiti married couples, the Kuwait Credit Bank (KCB), as per the government policy, provides a one-time, interest-free loan of KD 70,000 for each couple to buy a house or an apartment, or otherwise build a house in the housing plot allocated by the Public Authority for Housing Welfare (PAHW). This loan is only granted on the condition that both spouses (husband and wife) are Kuwaiti citizens. The repayment of the interest-free loan commences two years after signing the loan agreement with the KCB, with a monthly payment of KD 100, or 10% of the house-owner’s salary, whichever is higher). If repaid at a rate of KD 100 per month, the full loan can be repaid in 58.3 years.

28. In order to strengthen local economic development, Kuwait established a National Fund in 2013 for the development of Small and Medium Enterprises with a total capital of KD 2 billion. The objectives of the Fund are to create jobs for Kuwaiti citizen in the private sector, increase SME participation in the economy, and help create a business-friendly environment for SMEs.

30. The rapid growth of the Kuwaiti economy has led to the creation of a vast number of work opportunities. The country's expenditure on social services has generated a demand for manpower, which cannot be met by the Kuwaiti labor force; this gap is thereby met instead by expatriate, or non-Kuwaiti workers. All public sector and private sector jobs in Kuwait are decent jobs.

31. There are no slums in Kuwait. All citizens and residents (that is, the non-Kuwaiti population) live in housing built to decent livable standards.

32.The demand for housing at present significantly outpaces the supply. As of June 2016, there are 102,960 applications on the housing waiting list. In addition, the PAHW receives an average of 8,000 new applications every year. In order to meet this housing demand, and in alignment with the strategy of resettlement outside the Kuwait Metropolitan Area, the PAHW is undertaking a series of projects in the form of new large urban areas outside the Kuwait Metropolitan Area. The PAHW supplies housing (in the form of houses, apartment buildings, or housing plots) at the rate of 12,000 units per year.

33. All the houses, apartments and public and private buildings in Kuwait and thereby 100% of the population of Kuwait, Kuwaiti and non-Kuwaiti are fitted with piped clean potable, or drinking, water, which is safe to drink. The mean consumption of fresh water in Kuwait is one of the highest in the world. The brackish water and treated water produced in the country are used for agriculture.

34. The PAHW constructs all services required to run the city, including clean water and sanitation, and road and drainage networks. Thus, 100% of population in Kuwait has access to improved sanitation and sewage services.

35. All citizens and residents of Kuwait have access to electricity. The cost of electricity price is highly subsidized by the government.

36. At present, Kuwait does not have railway or subway systems, which are, more than ever, the means of sustainable transport solutions; therefore, the government is currently analyzing the costs and benefits of adopting these systems.