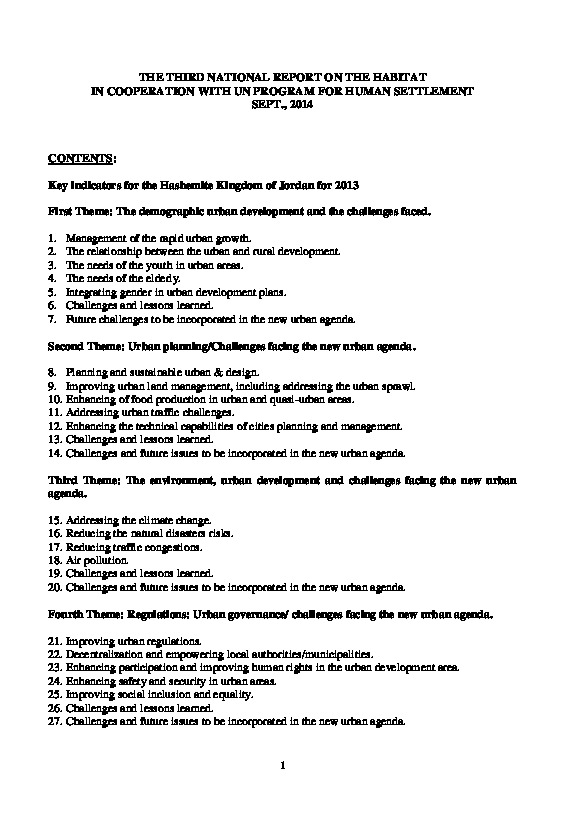 Management of the rapid urban growth

Amongst the many factors impacting the Jordanian society, urbanization is utterly the most influential factor in bringing about change and modernization and a clear contributor in the numerous transformations that struck the Jordanian society and the attitudes and ambitions of its members; being a paramount drive to which establishing additional institutions is attributed. Such institutions are mainly targeted to address the ever increasing demands of the individuals which come as a natural result of the population growth, the voluntary and coercive migrations, as well as the phenomenal influx of migrant workers from neighboring Arab countries and Southeast Asia which often geared towards urban areas.

Statistical data suggest that Jordan population have multiplied six folds during the period 1952–1995. Population growth remains on the rise; growing from 4,756 million in 1998 to around 6,530 million in 2013 (Such figure does not include Syrian refugees). At this pace, the population of the Kingdom is expected to reach 8,456 million by 2025. At present, Jordan is also witnessing a demographic transformation as it heads towards a drop in its young population under the age of 15 and an increase in the age group ranging from 15–69. Despite the continuous change in the age composition of the population, the Jordanian society remains predominantly young; whereas 37.3% of the population is under 15 years of age, 59.5% fall within the age group (15–69), and 3.2% are 65 and beyond. Furthermore, Jordan has also seen an increase in the urban community; increasing from (78.7%) in 1995 to (82.6%) in 2013. Such racing urbanization and development has given rise to many foreseeable adverse outcomes, such as the increasing percentages of poverty and unemployment, the issue of providing decent housing for the lower income category, providing infrastructure and social service, in addition to the environmental disturbance. To this end, urban management and planning processes came to existence with a view to work towards developing such policies and programs compatible with the development and rebound of the socio-economic situation of urban communities, and to find the solutions appropriate for the issues facing urban areas to enable the later perform its vested function.

It is the encumbering responsibility of local and municipal governments to manage urban areas and realize a decent standard of living for the citizens. As early as the twenties of the bygone century since the foundation of the Jordanian princedom, Jordan started focusing on local autonomy. This tendency had, however, been encountered by many difficulties such as establishing the municipal and rural councils, mainstreaming such councils to the different part of the kingdom as a mean of civil engagement in the local autonomy, as well as issuing the laws and regulations necessary to govern the operations of such councils.

The concept of development management starts off with an effective and comprehensive development process, which can be achieved by developing elaborately studies strategies. With that said, the presence of departments that adhere to and endorse the urban development approach in Jordan was imperative. Indeed, this was manifested in establishing the ministry of municipal affairs, municipalities, Amman greater municipality, Aqaba regional authority, Petra regional authority, and the development zones commission. Such departments were mandated to implement the plans, programs, and development projects within their districts. Based on that, the ministry of municipal authority is undertaking the provision of various facilities for the municipalities to enable them fulfill their mandates and enhance the developmental role thereof. Further, the ministry is responsible for developing the regional construction schemes and the elaborated structural plans for all of the kingdom's municipalities, participating in supporting and developing population clusters in which municipal councils lack, and manage financial remittances.

In the context of his Majesty's King Abdullah II son of Al-Hussein endeavor to bring about a paradigm shift in the path towards sustainable development in Jordan, a number of development and duty-free zones were launched in different areas of the Kingdom in 2008. Such new approach was aimed at realizing social equality through the distribution of the development outcomes to all governorates and regions, in addition to creating job opportunities, reduce poverty, and achieve economic growth, in addition to the establishment of Aqaba special economic zone (ASEZA) in 2001 to manage and regulate the Aqaba special economic zone. Furthermore, Petra development tourism regional authority was established in 2009 with the goal to develop the region economic, social, cultural, and touristic aspects, as well as contributing into developing the local community. The authority is managed and supervised by a council called "the council of Commissioners".

Nevertheless, over decades the Kingdome along with the government were compelled to scuffle with many consequences and limitations which came head to head with the successive governments' ambitions to implement most of the strategies drawn to develop urban centers. Despite this situation which for a few bygone decades and currently still overshadows this region, and the consecutive compulsory migrations coming to the Kingdom, especially during the last three years (Syrian refugees; where the total population of non-Jordanian residents have reach an astounding 2,236 million in 2014 – 1.4 million of which are Syrians –according to the Higher Population Council); which had driven the enormous growth of population and encumbered the Kingdom's infrastructure and limited natural resources, the different governments were able to realize the largest portion of such ambitions on the national level. However, the consequences and limitations as such had disrupted the implementation of such strategies or even called some of them off.