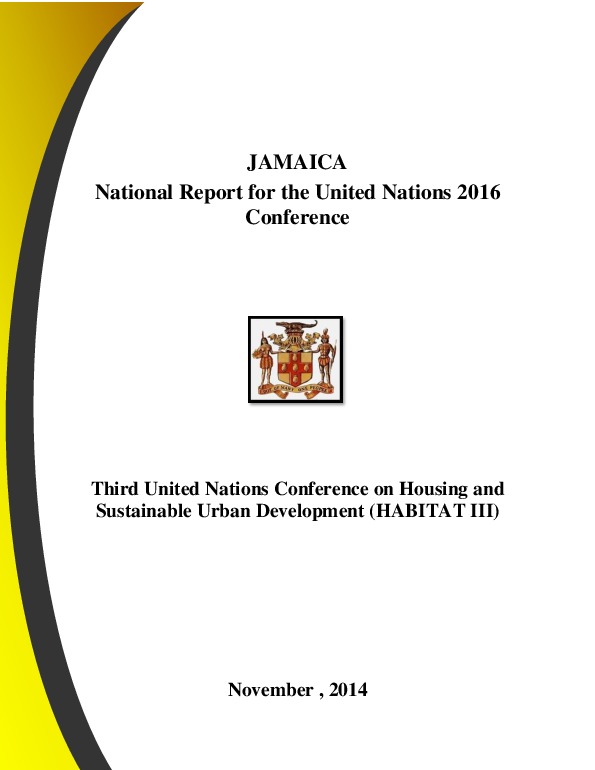 This report is undertaken in accordance with the Terms of Reference (TOR) for the preparation of National Reports on Housing and Sustainable Urban Development (Habitat III). Following on Habitat II, the United Nations General Assembly decided to convene the Third United Nations Conference on Housing and Sustainable Development, Habitat III, in 2016. Habitat III will be one of the first global conferences after the Post 2015 Development Agenda and is intended to provide the opportunity to discuss and chart new pathways in response to the challenges of urbanization and the opportunities it offers for the implementation of the sustainable development goals.

Member countries, for the purpose of this report, are being asked to describe what Central Government, Local Authorities, and other sub-national governmental authorities, in partnership with stakeholders, have achieved through the Habitat Agenda. The challenges experienced and lessons learnt, as well as future challenges and issues that could be addressed through a New Urban Agenda will also be discussed. The key elements that will be considered for creating a pattern of sustainable urban growth are:

As part of the preparations for Habitat III, the Government of Jamaica (GOJ) through the Ministry of Transport, Works and Housing (MTWH) established a National Habitat Committee. Information was submitted by committee members and other key stakeholders to inform the preparation of the report. Three regional consultations were conducted in Montego Bay (May 12, 2014), Mandeville (May 14, 2014) and Kingston (May 16th 2014) to solicit feedback from the private and public sectors as well as members of the public. This information was verified through desk studies and reviews by the Habitat Committee members and officers from the MTWH.

Urban Indicators Compilation: a number of ministries, departments, agencies, civil society groups and non-governmental organization (listed in the appendix) were conversant with each of the module areas and provided the required information.

A major achievement since the UN Habitat 1996 Report is the National Development Plan, Vision 2030 Jamaica, which sets out a strategic vision for the country and several sector plans (including Population, Urban and Regional Planning, Climate Change and Agriculture) to guide policy development and implementation, including systematic monitoring and evaluation. The Vision 2030 Jamaica promotes Jamaica as “the place of choice to live, work, raise families and do business”.  Consistent with UN Habitat’s Agenda, Vision 2030 Jamaica is promoting “Sustainable Urban and Rural Development” by creating sustainable urban centres, through urban renewal and upgrading; and ensuring safe, sanitary and affordable shelter for all (National Outcome #15).

As part of the GOJ’s long-term housing and sustainable development planning several initiatives have been undertaken including:

Jamaica with a population of 2,697,983 and an area of 10,991 sq. kilometres is the third largest island and the largest English-speaking country in the Caribbean. With an annual estimated population growth rate of below 1 per cent since the 1990s (Table 1), it is expected that the island’s population will increase to 2,761,000 in 2015; 2,872,000 in 2030 and to begin declining by 2050. The vision statement guiding the population sector commits the country to “a population which meets the sustainable development needs of the country”. Data from the 2011 Population Census shows that 54 per cent of the population of Jamaica live in urban areas representing an intercensal increase of 1.9 per cent. It is projected that the urban population will increase to 58.0 per cent by 2030.

The country is currently at an intermediate stage in its demographic transition. This is reflected in a shift in the population structure marked by a declining child population (0-14) and an increasing working population (15-64) and dependent elderly age group (65+). The trend indicates both a decline in crude birth and death rates. The former brought about by a reduction in the island’s total fertility rate through extensive family planning campaigns and efforts to increase the contraceptive prevalence rates, the latter, is a consequence of improvements in the provision and access to medical services. The life expectancy is 78.02 for women and 70.40 years for males, the overall average life expectancy for Jamaicans is 74.15.

The county’s main economic activity is centred on service industries which accounted for 79.4% of GDP in 2013. The goods producing industry including: manufacturing, construction, mining, and agriculture, accounts for 24.6% of GDP. Remittances contributed 4% of GDP. The Jamaican economy currently faces serious challenges: a sizable trade deficit of approximately US$4 billion; high unemployment (15.2%); a debt-to-GDP ratio of almost 130%; and debt servicing accounting for about 44% of the fiscal budget.

In spite of the economic and security challenges, the country has been able to advance reaching 85th on the United Nations Human Development Index for 2012 where the development status is shared with Brazil. The International Monetary Fund (IMF) approved a four year Extended Fund Facility with the GOJ with the main objective to create the conditions necessary for sustained growth through significant improvement in fiscal operations, debt and competitiveness.